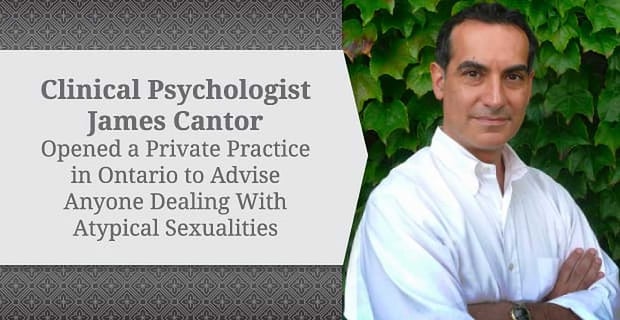 The Short Version: After spending decades researching atypical sexuality, Dr. James Cantor opened the Toronto Sexuality Centre to share his knowledge with patients dealing with a range of sexual behavior issues. Now James and his team of clinical psychologists provide therapy to individuals and couples throughout Toronto. He has helped individuals with severe kinks, gender dysphoria, and sexual anxiety, and he has worked with couples experiencing sexual conflict, dealing with affairs, and negotiating polyamorous relationships. He listens to personal issues with empathy and then gives his professional opinion on how to move forward in healthy ways. James told us that sexual desire is an undeniable part of who a person is and his purpose as a therapist is to see people embrace their feelings instead of fighting them.

James Cantor is an expert on atypical sexuality.

Throughout his career as a clinical psychologist, James has heard just about every sexual problem under the sun and then offered nonjudgmental opinions and solutions based on scientific research.

James made a name for himself as a clinical psychologist by studying pedophilia as an atypical sexual dysfunction at the University of Toronto Faculty of Medicine. He has spent over 20 years collecting research and writing research papers on sex offenders and pedophiles. Throughout his career, he has published over 100 peer-reviewed articles on atypical sexuality, and he said he has barely scratched the surface of this topic.

In the last year, James founded the Toronto Sexuality Centre to offer psychological services to singles and couples with sexual dysfunctions. He is passionate about teaching people to understand and embrace their sexuality. He doesn’t judge his clients or try to change their minds; he helps them to grow into who they’re meant to be. Through confidential sex and couples therapy sessions, he gives his clients the acceptance and insight they need to establish and maintain a healthy sex life.

“Your kink is your sexual orientation,” he said. “It’s inborn. You didn’t ask for this.”

After earning his M.A. from Boston University and his PhD from McGill University, James dove into a subject matter most often ignored by academia: pedophilia. He wanted to understand the role the human brain played in determining atypical sexual interests. His research led him to conclude that pedophilia is an inborn trait, not something people choose. Treating pedophilia, therefore, isn’t about talking someone out of their desires but teaching them to practice self-control.

Despite spending decades studying this topic, James said he still has things he wants to learn about human sexuality. He hopes to discover therapeutic ways to help people who are struggling with atypical sexual desires or psychologically harmful thoughts.

“I just wish I had enough hours in the day to find resources for those people who can’t become my clients,” he said. “I want to share the fascinating science and make it accessible to everyone.”

Normalizing Kinks & Getting to the Root of So-Called Sex Addiction

James became an authority on atypical sexuality after decades of researching the topic and writing academic papers. It was his niche. When he opened his private practice in Ontario, he found a majority of his clients knew about his reputation and came to him for help dealing with sex and gender related issues. So, he began to focus on treating singles and couples who had sexual kinks because he saw a need for niche sexual therapy in the community.

“By sheer fluke, we seem to be working in a niche within a niche,” he explained. “People who would otherwise be reluctant to talk about their sexual issues feel comfortable telling me.”

A 50-minute session at the Toronto Sexuality Centre costs $220. This price follows the guidelines set by the Ontario Psychological Association. You can book an appointment with James or one of his colleagues online.

James’ empathetic approach to therapy is comforting to clients who have sensitive problems in their personal or sexual lives. He has worked with individuals as young as 16 and as old as 70. Whether they’re dealing with social anxiety or an extramarital affair, people trust James to provide them with guidance and insight.

The Toronto Sexuality Centre provides confidential sex therapy to people of all ages.

When James treats people with severe kinks, his main message is that their feelings are normal and not shameful. He helps them accept their desires and pursue their interests in a safe and healthy way. He has seen adults come out as gay to their spouses and guided couples entering consensual polyamorous relationships.

He and his team sometimes have to be creative in coming up with therapeutic solutions for patients with deeply personal challenges. They look for the root of the behavior — for instance, James said sex addiction often masks a larger stress or insecurity — and then brainstorm ways to free people from fear and pain.

“There is no manual for this,” he said. “Every client is unique unto themselves. We have to customize every treatment we give everyone. On one hand, it’s a challenge, but, on the other hand, it’s a treat to work with so many different people.”

James Gives Clients Permission to Embrace Who They Are

James often sees people in great distress. They hate themselves for being drawn to kinky behavior. They feel afraid to admit their desires to a partner. They have overwhelming anxieties that inhibit pleasure in the bedroom. Such personal problems may lead otherwise healthy men and women to worry that there’s something wrong with them — but James assures them that atypical sexuality is just part of being human.

He encourages his clients to explore their desires, understand their fetishes, and resolve issues by embracing sexuality rather than fighting it. The Tortonto Sexuality Centre is a welcoming place for anyone facing sexual behavior issues, gender expressions, or relationship conflicts.

“The way personal transformation happens is just by being given permission to be the way you are — the way you were born,” James said. “It’s a powerful experience.”