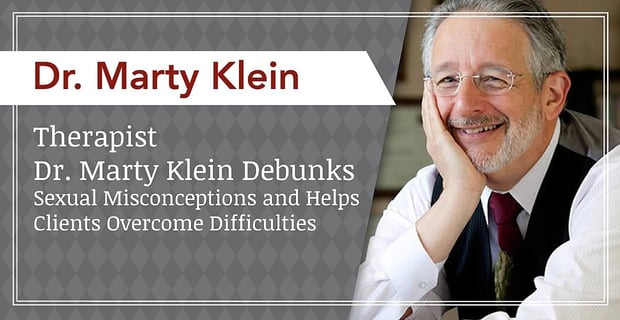 The Short Version: In the 1970s, a series of serendipitous events led Dr. Marty Klein into a career as a sex therapist. Since then, Dr. Klein has spent more than 40,000 hours counseling clients, and has written many books and articles that provide solutions for common sexual difficulties. He said many people have picked up misinformation as children or young adults and can benefit from a different way of thinking about sex. Among other issues, Dr. Klein wants to de-emphasize traditional sexual concepts that can put undue strain on intimate relationships.

As a graduate student in the mid-1970s, Dr. Marty Klein still didn’t know what career path he was going to choose. Then he happened upon a frank talk about women’s sexuality designed for men.

The women directed him to the local Planned Parenthood, where he began talking to female clients — who often brought their husbands or boyfriends along. Eventually, he developed his own talks on male sexuality — something that was uncommon at the time.

That series of events sparked Dr. Klein to become a licensed marriage and family therapist and certified sex therapist and open a practice in Palo Alto, California.

Dr. Klein now estimates that he’s spent more than 40,000 hours as a sex therapist. His clients range in age from 20 to 80. His clientele also reflects the diversity of Silicon Valley, as he sees clients born in India, China, Hong Kong, Turkey, and elsewhere.

From the beginning of his practice, one of Dr. Klein’s core missions has been to encourage people to seek out their own satisfaction during sex.

“One client told me that he cared more about the woman’s pleasure than his own,” he said. “This limited the experience for both of them. I told him, ‘If you were to come over to my house for dinner, I would care about your dining pleasure, but I would also care about mine.’ He learned that both parties need to enjoy a sexual encounter, not just one.”

Dr. Klein helps people find that pleasure, and even work through years of misconceptions about sex, demystifying the experience while teaching them how to make it physically and emotionally satisfying.

An Experienced Practitioner With 40,000 Hours of Sex Therapy

People who live outside of California can also learn from Klein’s insights. Early in his career, he began writing articles about sexuality for magazines and eventually crafted his first book, “Your Sexual Secrets,” which was published in 1988.

In 2012, Dr. Klein wrote another well-received book called “Sexual Intelligence: What We Really Want From Sex and How to Get It.”

“During sex, people don’t necessarily focus on the things they really want,” he said. “What people really want from sex is not a mind-blowing orgasm. It’s not a gigantic erection.”

His book explains that what most couples desire from sex is both pleasure and closeness. As with many of the topics he covers in his writing, the book distills complicated subjects to the core emotions many people feel.

Dr. Klein has written many books on sexual issues over his four decades as a therapist.

Dr. Klein has no plans to stop writing anytime soon. He’s logged so many hours counseling men, women, and couples that he’s now writing a book about the sessions and ideas that have proven most helpful to them. The new book, which describes his experiences over the years, is titled “40,000 Hours of Sex Therapy.”

“The book shows readers that if they look at sex with self-acceptance, compassion, and honesty, it makes it a lot easier,” he said. “It can also make relationships more enjoyable.”

Dr. Klein has mixed feelings about virtual therapy conducted through platforms such as Skype.

“For many people, it’s better than no counseling at all. But a therapist can’t possibly get as much information digitally as he or she can from being in the same room with someone,” he said.

Though Dr. Klein’s clients are well past their teenage years, he suggests that many of the unhealthy ideas they learned about sex in their youth have stuck with them.

“It makes me sad,” he said. “So much of what I do is repairing the crazy ideas people absorb growing up in America.”

He said, for example, that women often develop the idea that they’re not pretty enough to attract men. Men, in turn, are often taught to be hyper-masculine, even in the bedroom. Though some clients have evolved past the notions they picked up in their youth, American society’s difficulties discussing sex has made many people hold onto such misconceptions, he said.

Dr. Klein offers some simple advice for developing more sexually satisfied adults in the future. “Talk to your kids about sex,” he said.

He also suggests that couples talk to one another more about sex. It may be difficult, but it benefits both parties to be open about what’s going on in the bedroom.

“It’s almost impossible to fix your sex life if you don’t talk about sex,” he said.

During Dr. Klein’s four decades as a sex and relationship therapist, he said he has experienced plenty of recurring issues.

One of the most common is erectile dysfunction, whether it’s men complaining about their own or women complaining about their partner’s. Often, there’s nothing physically wrong with the men, Dr. Klein said. Instead, the issues are frequently emotional; the difficulty can come from the man’s or couple’s over-reliance on intercourse — “the only kind of sex that requires an erection,” said Klein.

Dr. Klein teaches people how to maintain intimacy no matter what the issue is.

“The number of couples who think ‘If there’s no erection, we can’t have sex tonight’ is staggering,” he said. “People take off their clothes, kiss, and hug, and if one body part doesn’t do what it’s supposed to do, they say, ‘Well, that’s it. Goodnight.’”

Dr. Klein said that idea is unfortunate and unnecessary. If the man can’t get erect, the couple often ends the night in an argument instead of an intimate embrace. He said there are many other sexual acts that can bring the couple what they’re really looking for — closeness and pleasure.

In addition, Dr. Klein said he sees a lot of clients who argue frequently, so he focuses couples on improving their relationship overall, not just their sex lives.

“To do this,” Dr. Klein said, “I focus on the dynamics between the couple, rather than simply on the content of the arguments.”