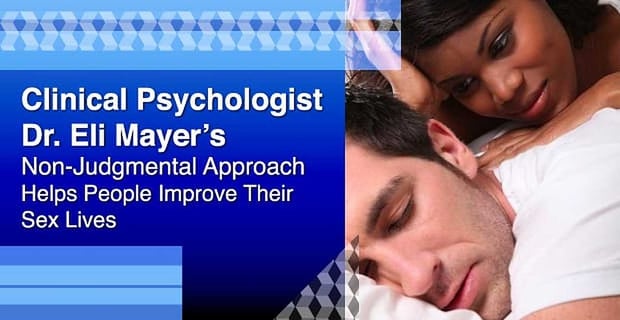 The Short Version:  Dr. Eli Mayer faced discrimination as the first openly gay doctoral student in his graduate program. But after he graduated and started his practice, the AIDS crisis hit, and many of his gay patients in New York City appreciated that he could relate to them. Initially, Dr. Mayer focused on traditional psychotherapy, but after studying sexuality, he became a certified sex therapist. Today, his patients, who are couples and individuals, benefit from a blend of both techniques. Many couples find comfort with his sex therapy techniques and often achieve results faster than with traditional psychotherapy.

When Dr. Eli Mayer was applying to his doctoral program in the early 1980s, he kept his sexuality quiet because he knew some universities wouldn’t accept an openly gay student. His decision to come out during his second year at Yeshiva University put his academic studies in peril when the faculty became divided over whether to expel him. He stayed in the program, but some people there would never speak to him again.

Dr. Mayer went on to become a licensed clinical psychologist. After graduation, at the height of the AIDS epidemic, he started a practice as one of the first openly gay psychologists in New York City’s Greenwich Village.

“This neighborhood was like the land of the living dead; it was like jumping out of a horror film,” he said. “I had many patients coming in and out, and some would die very, very shortly after.” Dr. Mayer’s own experiences uniquely positioned him to empathize with and support young gay men grappling with illnesses and death.

Dr. Mayer continued practicing traditional psychotherapy, but over time, he said it became routine and boring. Many of his patients often didn’t see results for years, if ever.

Dr. Mayer said he had always been fascinated by human sexuality, but had learned very little about it in school, so he began studying it extensively. He became a certified sex therapist, which allows him to approach therapy with a unique perspective.

His work can create positive change much faster and provide significant, lasting benefits for individuals and couples — especially in their sex lives.

When Dr. Mayer came out as gay in graduate school, he experienced discrimination. But his sexuality became an asset when he opened his practice because it helped him relate to his marginalized gay clients during the AIDS crisis.

He has also made a name for himself as a trusted resource for gay men, the transgender community, anyone else in the LGBTQ+ spectrum, and those exploring alternative lifestyles, including non-monogamy. Dr. Mayer lends a nonjudgmental ear and can empathize with his clients’ struggles coming out and facing discrimination. His approach is relaxed, jovial, interested, and concerned, he said, which is often a breath of fresh air to those who feel misunderstood.

Dr. Mayer was surprised to learn that being gay also makes him an effective therapist for straight couples. He finds that his sexuality can put his straight male and female clients at ease, and his practice is an equal mix of gay and straight clients, he said.

Dr. Mayer has a theory about why straight couples gravitate to him. “I think when people are going to talk about what’s going on in their sex lives, women don’t like doing that with a straight guy so much — it’s uncomfortable,” Mayer said. “But to a gay man, it’s like talking to their hairdresser; it’s no big deal.”

Additionally, Dr. Mayer said straight men often prefer to talk to him because they don’t feel comfortable having their sex lives analyzed by another straight man.

As far as Dr. Mayer knows, he’s the only openly gay licensed clinical psychodynamic psychologist who’s also a certified sex therapy supervisor east of the Rockies. His skills and personal experiences help him get better results for his patients.

Dr. Mayer has been practicing standard psychotherapy for 25 years, but he enjoys how his patients often see faster results through sex therapy.

“With psychodynamic psychotherapy, people walk out of my office after being with me for 15 years and say, ‘Maybe that helped,’” he said. “Now that I do sex therapy, people skip out of my office after six months saying, ‘Dr. Mayer, you’re a genius, I never thought I’d have sex again!’ That’s one of the things about sex therapy; it tends to be quick.”

“In traditional psychotherapy, you figure out what it has to do with and what (a client’s) anxieties are. The connection is there, and they see it, but it makes no difference. With sex therapy, you start from the other end.” — Dr. Eli Mayer, Clinical Psychologist and Sex Therapist

Sex therapy works from the opposite end of the spectrum of traditional psychotherapy, Dr. Mayer said. For example, if someone comes in because they have problems getting erections when they’re with their boyfriend, but not when they’re alone, there could be two different approaches.

“In traditional psychotherapy, you figure out what it has to do with and what the client’s anxieties are. The connection is there, and they see it, but it makes no difference,” Dr. Mayer said. “With sex therapy, you start from the other end. You might say, ‘Well, do you like giving blow jobs? Would you have an erection if your man gave you a blow job?’ And you work from there. It’s more practical. You have a real sense of what’s going on and how to work with it.”

Men and Women of All Ages Come to Dr. Mayer

Dr. Mayer helps patients of all ages — from their 20s to their 80s — and one of the most common problems he sees is with long-time couples who used to have great sex, but things have fizzled. He enjoys helping them find the spark again.

“People often come because of concerns that prevent them from getting into a sexual relationship,” Dr. Mayer said. “For guys, it can be erectile dysfunction or other forms of anxiety, and for women, it can be the pain of intercourse and also general anxieties about sex.”

Another common reason clients come to Dr. Mayer is that they think there’s something wrong with them — when there isn’t.

“People often will come for things they believe are problems, but aren’t,” he said. “I teach them how to manage them, so things like fetishes or unusual interests, or things that are pretty normal, but it somehow got into their heads as kids that, ‘Oh my God, this is terrible.’”

Creating Powerful Changes in the Lives of his Clients

Dr. Mayer said he loves his profession and has seen some amazing things happen in his clients’ lives, which gives him great satisfaction and motivation to continue.

“The most powerful thing that happens is when someone comes in believing that their sexual desires are strange or terrible, or they couldn’t talk to somebody about it, and they find out it’s OK,” he said. “Learning to be comfortable with all parts of yourself, and how to work that into a relationship — that’s always the stuff that feels like, ‘Wow, what a shift.’”

Dr. Mayer suggests tackling problems head-on and working with your partner on difficult issues. Open communication can be challenging, but Dr. Mayer said he got into the field to help clients build better lives and stronger relationships.

“It’s such a wonderful feeling when you see people’s lives are improving as a result of the treatment,” Dr. Mayer said. “That’s why I’m doing this.”