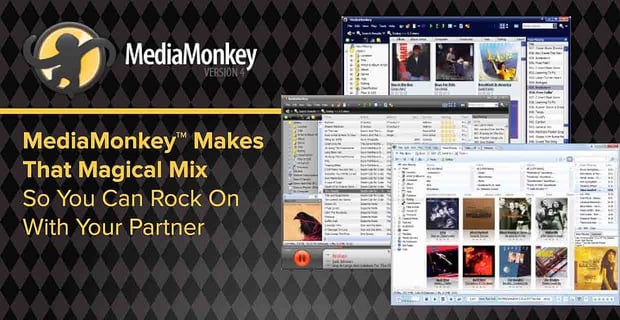 The Short Version:  MediaMonkey is a free platform where singles and couples can store, manage, and share their favorite romantic playlists. It enables users to keep track 100,000+ audio and video files, so they can queue up a lovey-dovey song at a moment’s notice. If all that sounds like music to your ears, go ahead and download MediaMonkey, organize your songs, grab someone special, and press play.

When I was 17, I went on a movie date with a guy, and it started to rain as he walked me to my car, so I offered to drive him to his car. I drove intentionally slowly through the parking lot, and my car acted as a good wingman by playing Rufus Wainwright’s “Hallelujah” while rain pitter-pattered on the windshield.

Once we reached his car, my date clicked off his seat belt but didn’t turn to leave, and I took that as a good sign. In my mind, I was already telling this story to my friends. I’d tell them how the soft music went into its last chorus as we gazed into each other’s eyes.

If you don’t want to ruin a romantic moment with someone special, you should take a more active role than I did in preparing songs to accompany your date nights. Fortunately, modern daters and music lovers now have the ability to collect thousands of songs on their personal devices, and MediaMonkey can help them organize, store, and share their music and videos.

MediaMonkey is a digital media player and library that can store 100,000+ files in your personal collection. That means you can put together romantic playlists of all sorts and make sure you have a slow song ready to go at a moment’s notice. MediaMonkey also allows couples to sync up their playlists and share music compilations that mean something to them.

“People are drawn to MediaMonkey because of the management and organizational facilities it offers for large collections,” said Russell Samuels of Ventis Media Inc. “We wanted to create tools to help individuals curate their music collection. That way, it’s easy to find music you’re interested in hearing.”

A Passion Project Struck a Chord With Music Collectors

MediaMonkey began as an unpaid passion project. Around 10 years ago, two music enthusiasts, who also happened to be software professionals, felt dissatisfied by the playlist options available to consumers. Many of the big names in the space at the time, including Windows Media Player, couldn’t handle a large number of audio and video files, different audio formats, or sharing with different devices, and that limited the options for music collectors on the web.

Music collectors can use MediaMonkey to sync their customized playlists with any mobile device.

Russell and his friend decided they could do better. They put their heads together and co-founded MediaMonkey, a media organizer for serious collectors around the world.

At first, Russell worked on the platform in his spare time from his home in Montreal. He had a full-time job, so he had to find time on weekends and evenings to make progress on his pet project. It began as a hobby, but soon it took on a life of its own and became a thriving business opportunity.

Unlike its competitors, MediaMonkey isn’t a store where you can buy music. It isn’t an intelligent algorithm suggesting music you may like. It’s simply a place where you can gather songs you know you like and organize them with playlists and tags so you never lose track of a favorite tune.

MediaMonkey attracted interest from music lovers who wanted a smarter way to manage their audio files. Its intuitive and user-friendly system helped people amass impressive collections of music and keep them organized. After a year of hard work, Russell quit his job and dedicated all his time to seeing MediaMonkey grow into a major player in the music industry.

“It started off as two guys working from home,” he said. “We got into it because we felt a need for a platform that served serious music collectors.”

Young lovers once exchanged mixed tapes with one another to show affection. They took the time to record songs in a customized list, and that usually become the go-to cassette for a romantic evening in. Nowadays, couples can create customized playlists of songs and movies on a variety of platforms, but all those files can became disorganized and get lost in the ether.

If you want to go a little old-school and impress your date with a romantic gift, you could always burn a CD of songs that remind you of your relationship. MediaMonkey allows users to put together a special playlist and put that list of up to 20 songs on a CD.

“Sometimes, when something is online, it’s hard to keep track of it,” Russell said. “CDs are nice because you have something physical to hold onto. You have that artifact.”

You could also choose to put a larger chunk of songs, videos, and files on a USB key and give that to your date. Think of it as a high-tech mixed tape. The upside of using a portable drive is that the songs aren’t set in stone, and you can continue to add, edit, and maintain the list with your partner as your relationship evolves over time.

Of course, you don’t have to create a physical copy to share your playlist with a significant other. You can share it with them quite easily online. This is less of a romantic gesture and more of a convenient merging of resources. You can create your playlist, carefully choosing the right songs in the right order, and then sync your MediaMonkey playlist with your partner’s favorite mobile device. Then they can access the content whenever they want and carry it with them as they go through their days.

More than 16,800 people have reviewed MediaMonkey on Google Play, where it has an average rating of 4.5 stars. “I love MediaMonkey on my desktop and thought it would be a great addition to my Android phone,” said Tom Kaye in a review. “It boasts the ability to sync my library over the MediaMonkey server.”

Seeking Input as They Develop a More User-Friendly Platform

MediaMonkey has been around a long time, and it has continually expanded to offer more quality and quantity to its loyal members. The team listens to feedback from music lovers. When users said they enjoyed using tags to find similar songs and videos, the team added a wide array of tag options. When users said they were looking for a musical community atmosphere, MediaMonkey launched a discussion forum where users could share tips and stories with one another.

The MediaMonkey app is currently available on Windows and Android.

Nowadays, the team is hard at work developing a new version of MediaMonkey that will have a more modern look and feel while still integrating nicely with the old system. Russell said he expects this new version to be ready to launch by the end of the year. It is currently being beta-tested.

Russell said one of his goals is to create a cloud-based system that allows users to easily store and share content on Google Drive so users can store their collections and access them from anywhere. The new system will also offer integration with a Network Attached Storage, so folks can organize their files on their servers and share their collection even more easily.

“If someone wants to share a playlist on MediaMonkey, they’ll be able to sync it with their server and listen or edit the content on any device with access to the server,” Russell explained. “MediaMonkey Server will be an open-source product that tech-savvy people can use at no cost.”

By publishing MediaMonkey Server as an open-source product, Russell hopes to get others involved in modifying the new version, adding unique features, and improving the product so it better meets consumer needs.

Music is an important component to any romantic moment. It can heighten the emotion and spark chemistry between two people, or it can ruin the mood faster than you can sing “Uh huh, uh huh, uh huh.”

If you want to customize a soundtrack for your date nights, MediaMonkey can back you up with its easy-to-understand organizational tools. You don’t need to be very tech-savvy to put together playlists that speak to your tastes and your dating history. Plus, you can use the straightforward platform to keep your media files nicely tagged, filed, and stored.

Once you’re satisfied with your selection of songs, you can sync your MediaMonkey account with your significant other’s device and let them know you care.

“It’s nice to work on something that’s meaningful to you,” Russell said. “It’s pretty neat that such a small company has been able to do so much for so many music lovers.”