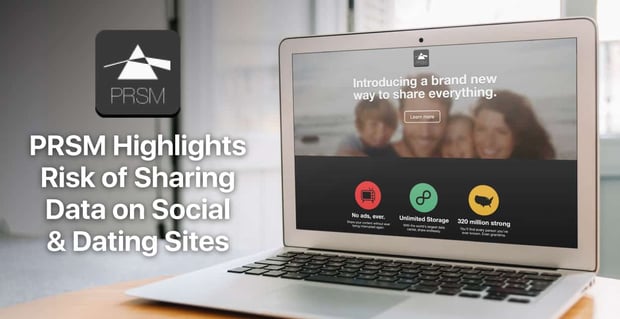 The Short Version: The satirical PRSM social network, with its vast reach and instantaneous sharing ability, may seem like a harmless joke at first, but then you realize that’s actually how the internet works, and it’s a little bit terrifying. Endless, ad-free sharing is the tongue-in-cheek promise made by the PRSM network, which already has access to personal data from over 320 million Americans (that’s everyone). If you’ve never given much thought to how much sensitive information you share with every click, like, swipe, and message, the PRSM team is here with a gentle reminder: We’re always watching.

When you’re alone and surfing the web, it’s easy to imagine yourself as a clandestine and anonymous user exploring online content without anyone being the wiser.

However, in reality, every click is a footprint that’s easily tracked and recorded by many shady online entities. Someone views a cat video, and an algorithm generates more cat videos. Someone visits an X-rated hookup site, and their sexual proclivities become a permanent part of their data profile.

As it turns out, the internet kind of is a series of tubes, and they’re sucking up personal information on a scale never seen before. Social networks, dating websites, search engines, and other sites collect massive amounts of personal data from users with zero accountability.

I don’t want to be alarmist or anything, but it’s possible we’re careening toward a dystopian future where privacy is an archaic and utterly meaningless term.

In 2013, privacy advocates at Datacoup created a fake social network called PRSM to question the wisdom of sharing absolutely everything online.

The PRSM social network may be fake, but the privacy concerns its raises are all too real.

Hyping itself as “the world’s largest data center,” PRSM claims it can handle over a quadrillion requests per second and store up to 5 zettabytes of information. Such unimaginably astronomical stats actually come somewhat close to the reality of the internet. Annual internet traffic is fast approaching the zettabyte era and Google handles trillions of searches each year.

With a satirical plug, PRSM boasts having Google as one of its key partners, and it also calls out Facebook, Apple, Microsoft, Yahoo!, and AOL as complicit in the massive data sharing practices that have turned consumers into products — with no end in sight.

“PRSM was founded to help people share even more about themselves,” said Casey Falvey, who’s the CTO at DataCoup and the mastermind behind PRISM. “In a world where sharing isn’t always caring, PRSM wants to help bridge the gap between TMI (too much information) and NEI (not enough information).”

Too Much Information & Not Enough Accountability

Growing up, my mother was always very clear about what to do if a stranger in a van offered me candy, but she never said anything about a stranger with an app offering candy to crush. The internet may seem innocuous, but it can pose a threat to users who aren’t careful about where they go, who they talk to, and where they entrust their personal information.

Some online daters have discovered, to their alarm, the dangers of sharing their personal lives on a not-so-discreet website. The Ashley Madison data breach of 2015 is a chilling reminder of the lives that can be ruined if and when online companies fail to protect personal data from cybercriminals.

Want to join PRSM? Then you’re in luck because everyone is already an unwitting member.

Sharing private data on a social website can have serious consequences. It’s not just a matter of annoying targeted ads or intrusive marketing. Online companies can shove people out of the closet and turn their private lives into a public spectacle.

That’s probably why Digital Trends called PRSM “the scariest, truest satire out there.” It hits on the greedy data-gathering practices that buy and sell people’s private lives.

“People should consider using PRSM if they are ready for sharing more about themselves than they ever dreamed,” Casey said.

If any curious users want to actually sign up for PRSM, however, they’re in for a rough awakening. When you click the “Sign Up Now” button, you’ll see that your  personal device and identity is already part of the system. Sorry to inform you, but Big Brother is already watching you.

A ReadWrite review said, “PRSM is just the latest effort from concerned citizens encouraging the country to learn more about the questionable practices by government intelligence agencies.”

Datacoup Envisions a Future Where Users Control Their Data

PRSM is run by conscientious objectors to the massive government spying conducted by the National Security Agency in the U.S. The parody page ultimately directs readers to learn more about the NSA’s unethical and unconstitutional surveillance methods.

The PRSM sharing network is fake, but the passion behind it is real. A startup called Datacoup launched PRSM in 2013 to highlight the privacy issues tainting online interactions, advertising, and sales.

The creators of PRSM said, “We view privacy as a consumer empowered with their data. Doing with it whatever they see fit. Privacy, for us, is a consumer having an equal seat at the data negotiating table with businesses (and even government).”

Datacoup supports the world’s first personal data marketplace where users can choose to spend their data as if it’s an online currency — because it is. The platform gives value to the consumer by allowing them to sell and assess their data in a straightforward way.

Datacoup emphasizes knowing where your data is going and how to properly spend that online capital.

The Datacoup platform consolidates personal data from merchant accounts and social media profiles, thus offering users a complete look at their impact in the data marketplace. Every time users choose to share, click, and engage online, they can earn cash in their pocket thanks to Datacoup. This transparent and paradigm-shifting setup has the power to change the data marketplace.

By encouraging folks to “reclaim their personal data,” Datacoup has positioned itself as a responsible alternative to PRSM’s unlimited sharing dystopia.

“Basically, our goal is to make sharing your personal details as seamless as possible,” Casey joked. “No friction allowed. So seamless, you won’t even realize you’re using the internet to meet complete strangers!”

The PRSM social network is the waking nightmare of privacy advocates everywhere. It follows users wherever they go, unobtrusively collecting data and harvesting billions of lives for its own gain. While PRSM isn’t real, the data-mining practices it describes are.

For decades, the internet has tantalized people with its wealth of knowledge and sharing power, but sometimes its so-called free services go too far. Some websites don’t offer any ads because the product they’re selling is you — your likes, your demographics, and your habits. Datacoup is on a mission to bring this transaction to light and make consumers more aware of how they spend their data.

Whether you’re joining a social media network or a dating site, you should be cognizant of the trade-off between personal privacy and online services, so you don’t reveal too much and lose yourself.

“If you’re looking for a place where literally everyone is a user, you’ve come to the right place,” Casey said about PRSM. “That is to say, our users are engaged, but not yet in a committed relationship.”