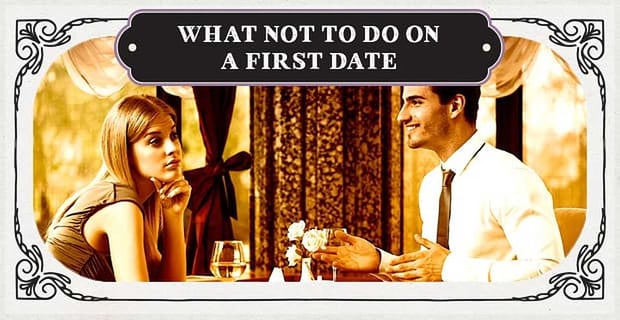 Many of my male clients are in their late 20s and mid-30s, and I’d say it’s because of the rise of online dating, especially for mobile. While online dating makes it easy to get dates, it’s one of the reasons why a lot of my clients are going on more first dates but the same amount of second dates.

In an attempt to help these men, I wanted to compile a list of things you definitely should avoid doing on a first date, particularly in terms of the conversation.

When we’re on a first date, we’re usually nervous, and nervous energy can manifest itself in many ways. Maybe you babble; maybe you clam up. Whatever it is, many times, in our nervousness, we might blurt out something we shouldn’t have. Our wires get crossed in our brains and the filter disappears. So, while we come in with the best of intentions, our accidental verbal outpouring could have disastrous effects. Make sure none of these things exit your pie hole on date number one.

I know it can be somewhat nerve-wracking to be out on a first date meeting someone new. This can manifest itself by answering her questions but not expanding on anything. This leads to her having to keep coming up with questions and doesn’t give you a chance to showcase yourself. Each question should be an opening for you to share something about yourself, even if the answer itself only requires a word or two.

If she asks where you went to school, don’t just say “University of Miami.” She wants to know more about you. Instead offer “I went to the University of Miami, but it actually wasn’t for the weather. I wanted to major in marine biology and acting. Yes, I know it’s an odd combination, but I dreamt of having a show like Jacques Cousteau where I could talk about various…”

2. Be Very Careful About Oversharing

My friend Joe got this gem on a first date: “My therapist thinks most of my problems come from my hatred of my father, but she changed my medication this week. So I feel like it should get better.” Just, wow. I mean **shakes head** wow.

Yes, I understand the concept of being your true self. I used to say I’d rather scare someone off with the truth than lead them in under false pretenses, but there’s a difference between being honest and oversharing. I have many clients who struggle with some form of mental or physical illness, and while there is nothing inherently wrong with any of it, telling someone on the first date that your schizophrenia or herpes is acting up can basically guarantee you no second date.

Likewise, avoid traps she might wittingly or unwittingly lay. If she asks you why your last relationship didn’t work out, say “We just became two different people.” Don’t say “The lying bitch was banging my friends behind my back. I lost two friends and one girlfriend.” Awkward!

3. Don’t Start Criticizing Her Right Off the Bat

This is where a lot of guys can unwittingly fail. There is teasing, and then there is being a dick. Sometimes the line between them is very thin, and it shifts. What works for one person doesn’t mean it’ll work for another.

While teasing is fun and necessary, it needs to be done correctly and at the right time. If you tell your good friend his new shirt makes him look like Big Bird, it’s funny because you have a deep foundation of friendship behind you and he knows you still like him.

When you’re critical of anything on a first date, there’s no foundation. She doesn’t know you at all, and if you start off criticizing her, even if it’s meant to be lighthearted, it can blow up in your face. Some examples that happen often are badgering her about her political beliefs, teasing her about the school she went to, talking shit about where she works, or saying anything negative about any of her friends.

I know what advice you’ve probably heard about talking to girls. “Just keep asking them questions. Women love to talk, and it will show that you’re interested in them!” Meh. This is sorta right, but it mushes different points together, creating a confusing conclusion. Yes, it’s good to ask questions to find out about your date, but it shouldn’t just be a rapid-fire, interview-style interrogation.

Secondly, we don’t usually ask the questions we’re actually interested in knowing the answers to. Lastly, if you only ask questions, you’re not building a rapport. There needs to be a back and forth with the energy. If you’re the one asking all the questions, there’s an imbalance. Plus, all questions are NOT created equal. Some will hurt you way more than help you.

Where are you from? What do you do? Where did you go to school? What do you like to do on the weekends? Ugh. How many times have you asked these questions? How many times have you answered them? Probably hundreds if not thousands of times. Everybody is sick of these questions. I call these the dating interview questions. They do not add to the conversation in any meaningful way.

Think about the friends you have. Where you met them, where they’re from, what they do, or where they went to school aren’t the only reasons why you like them. It’s about who they are as a person, not just some personal facts. Every question that can be asked logically can be asked emotionally. You want to build positive energy. Instead of “Where are you from?” ask “What’s one of your favorite memories from childhood?” Instead of asking “What do you do?” try “When was the last time you kicked ass at work?” Sure it may sound a little different, but you do want to stand out from the crowd.

**facepalm** So many people ask this! I know it might seem like you two are commiserating over being single and this could be an opening to vent about past relationships, but this is such a no-no. In its best-case scenario, it’s going to be a bitch session. At worst, you’re asking them “WTF is wrong with you?!” Not a great way to start a conversation.

You don’t want a first date to carry such negative connotations. A first date is supposed to be light, fun, and exciting. No need to drag out the baggage right at the start. It can also be humiliating. It’s the same reason you don’t ask somebody why they’re unemployed. You’re shooting an arrow right into their vulnerable parts. There’s plenty of time, if you guys continue to date, to discuss these things down the line.

Slow down there, Lone Ranger! Nothing turns a woman off faster than a seemingly clingy, desperate dude. If you start asking about her future family planning, you’re going to come off looking that way. I know this can be confusing for guys as well. We’ve been told to show a girl we’re interested and that we’re not just a flash in the pan by asking her about the future. But that’s not a blanket statement.

For instance, on a job interview, it’s good to ask about the company, but it’s not OK to ask them about their past litigations, lawsuits, failed CEO, or other such material. Likewise, on a date, don’t ask her how she envisions her wedding day, the names for her future kids, or what type of parenting she thinks is best. It’ll send her running for the hills. Instead, ask her how she sees her future. Let her offer what she’s comfortable sharing.

Put Your Best Self Forward & The Rest Will Fall Into Place!

Remember, everybody is different, so no advice is a total panacea for all. And, if you have to err, you should err on the side of your truer self. The more you try to be somebody you think she wants, the harder it is for your future mate to find you.

Yes, sometimes accidents or uncomfortable situations can actually help you bond. As Matt E. says, “I went canoeing in the Adirondacks for a date many years ago, and I called her the wrong name in the middle of the lake. Very awkward and made for a long ride back on the canoe. We have now been happily married for nearly 15 years.” But, for the most part, let’s put our best selves forward. That way, we’ll get more quality first dates, second dates, and beyond.

Great Guys Exist, But They Might Be Trapped in First Date Hell

How to Know Your First Date Went Well

3 First Date Qualities That Will Destroy a Relationship Over Time

5 Ways to Impress a Woman on the First Date