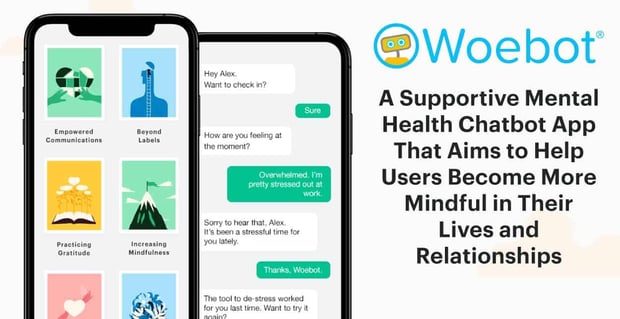 Woebot: A Supportive Mental Health Chatbot App That Aims to Help Users Become More Mindful in Their Lives and Relationships

The Short Version: Many people around the world — whether they are single or in a relationship — suffer from anxiety and depression. Even if they attend regular counseling sessions, their therapist isn’t available to talk at all hours. That’s why Stanford researchers developed Woebot, an always-available chatbot that uses proven mental health strategies to help users cope with their daily struggles.

Imagine you’ve had a stressful day at work, and you want to have a quiet, relaxing evening with your partner. You need to quickly calm down and be more mindful of the goods things in your life.

So, on the train ride home, you connect with Woebot, a chatbot trained in cognitive behavior therapy (CBT) that is designed to help you improve your outlook and mental state.

Woebot asks “How are you feeling at the moment?” and you answer that you’ve been feeling stressed out at work lately. Then Woebot suggests using tools that have helped you relieve that stress in the past.

The Woebot app can help people with their relationship issues by offering users advice and tools when they need them most.

First, Woebot may ask you to center your emotions with an entry into your gratitude journal that focuses on what you’re grateful for rather than on what makes you anxious. So, you write down a list of things in your life that bring you security and peace.

That helps you restore harmony without visiting a specialist or arriving home still feeling frustrated.

The next day, Woebot checks in with you, and, if you report that you feel better about your stress level, it may ask you to add another entry to your gratitude journal.

Whatever issues users have, Woebot deploys proven strategies to help them think in a more positive, productive way. Over time, Woebot gets to know users and creates a personalized path for them.

Many users have suggested that the chatbot made them feel like they had a friend in their back pocket. They also appreciate how approachable, responsive, and sympathetic Woebot is to their needs. That’s because it was designed that way.

Making Therapy Accessible to Everyone

The Woebot app — available on iOS and Android — was created by Stanford researcher Dr. Alison Darcy. Alison and her team had developed psychological strategies that they felt could help thousands of people, and needed to design Woebot to bring those to people on a large scale.

According to Dr. Darcy, about two-thirds of people who suffer from mental health problems will not seek professional help.

On the day it launched, Woebot interacted with more people than a therapist could see over his or her entire career. That immediate popularity also suggested that many people want to see a mental health professional, but can’t due to time constraints or prohibitive cost. Others may worry about the stigma associated with seeing a therapist.

“I love making this treatment available on a wider scale. The whole team joined Woebot because they believed in the mission. We wholeheartedly believe in access to quality mental health care when people need it,” Athena said.

Woebot serves users in more than 120 countries in regions, including the Middle East and Asia. The app’s typical user is under 40, and men and women tend to use the app equally. According to Athena, that figure is surprising because men typically don’t seek out mental healthcare as often as women do.

“We see so many people who are grateful for the accessibility of Woebot — it’s there during their time of need. They didn’t think a chatbot available through an application could be as helpful as it is,” said Athena.

Improving Interactions by Tracking Their Effectiveness

Woebot engages in more than 2 million conversations each week, and the app’s creators developed a study to gauge how the app measurably helps users.

In the study, Woebot users reported a decrease in anxiety and depression after only two weeks of interactions, and most of those users said they chatted with Woebot every day.

“The study proved that Woebot can impact people’s moods and decrease their stress,” Athena said.

So, what exactly makes a conversation with Woebot so effective?

Chief Clinical Officer Athena Robinson spoke with us about how Woebot can help people in their lives.

Cognitive behavior therapy (CBT) encourages people to be more conscious of what they’re thinking or feeling. With its daily check-ins, Woebot encourages users to think about their feelings instead of pushing down their emotions and disengaging.

“People can learn to be grateful for others, for memories, or for items throughout their day,” said Athena.

Woebot also differs from traditional therapy in its frequency. Instead of thinking about what you want to discuss with a therapist while you wait a week in between sessions, Woebot offers immediate interaction. If you’re feeling bad about something, you can engage with Woebot and find strategies to feel better right away.

“It will offer you different ways to feel better in the moment. It’s a tailored, personalized, and friendly conversation,” Athena told us.

Woebot also encourages users to take responsibility for themselves and set aside time during their day to focus on their mental health.

“There is no one-size-fits-all solution, but we can help people figure out what’s going on with them. We are a self-help tool that allows users to help themselves through,” said Maryam Jahed, Senior Product Manager for Woebot.

According to the World Health Organization (WHO), more than 450 million people around the world suffer from mental illnesses.

“The global rates of depression have been increasing; they outpace physical concerns for disability,” said Athena.

When people have untreated mental health issues, they may feel like nothing in their life is as good as it could be. Their relationships may suffer, work performance might slide, and their life won’t be as joyful. But most of them don’t have the time or resources to see a therapist once a week.

Woebot is programmed with a variety of mindfulness resources and suggestions.

“Our mission is to make mental healthcare more accessible, and our reviews let us know we’re on the right track. People are using our app, and it has an impact on their lives,” Maryam said.

But the company is expanding that focus, and rolling out a Woebot prototype designed to connect with new moms. Next, the team will consider how Woebot can help those who have substance abuse issues.

“This work must be done because people are in need. We must continue the mission of making mental healthcare radically accessible to people,” Athena said.