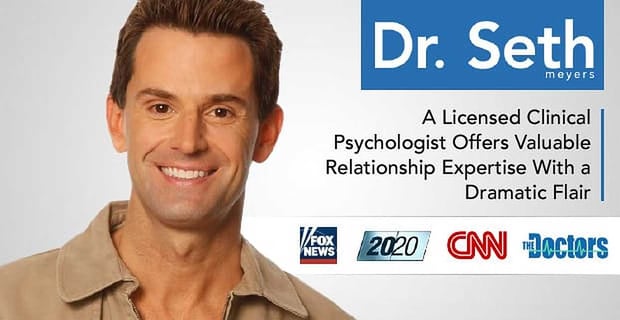 The Short Version: Dr. Seth Meyers is a clinical psychologist sought after for his expertise in relationships, parenting, and youth. Trained to analyze emotional issues, Dr. Seth runs individual and couples therapy sessions in Los Angeles to help his clients get to the heart of their problems. Over the years, Dr. Seth has also shared his professional opinions on television segments for shows like “Dr. Oz” and “Nancy Grace.” Today, as an author, blogger, and television guest expert, Dr. Seth explains the nuances of relationships, dating, parenting, and other important topics to a national audience on a variety of platforms. Singles and couples can read Dr. Seth’s book or his blog on Psychology Today to learn how to break negative dating patterns and date in a healthier and happier way.

As a teenager, Seth Meyers had a clear idea of what he wanted to do with his life. “I knew from the age of 16 years old that I was going to be a psychologist,” he said.

He went to Vassar College and majored in psychology, and then he went to New York City to get his doctorate in clinical psychology. Over the years, he completed training in hospitals all along the East Coast, helping people recover from traumatic events and start rebuilding their lives. He spent a one-year fellowship working in an addiction treatment center on Skid Row in LA.

According to Dr. Seth’s bio, “He has worked in almost every type of mental health setting, including locked inpatient psychiatric units, partial hospital programs, and outpatient mental health clinics.”

In private sessions, Dr. Seth worked with singles and couples who faced emotional obstacles in their lives. Soon the psychologist decided to grow his audience and help more people by writing a book about relationships.

“My plan was always to be a writer in addition to seeing clients,” he told us. “I started work on my first book soon after I got my psychologist license.”

His first book, “Overcome Relationship Repetition Syndrome and Find the Love You Deserve,” went on to sell over 10,000 copies.

As he promoted his book through various media outlets, he began to get noticed by television producers, who called on him to appear on national news segments and talk shows. He was interviewed and gave his opinions on celebrity relationships, criminal psychology, and other hot topics in the media. Soon, Dr. Seth became a national authority on psychology and relationships, appearing on “Dr. Oz,” “Nancy Grace,” “Good Morning America,” and “20/20.”

“In terms of media, I am proud of surviving ‘Nancy Grace’ for several years!” he said. “Serving as a frequent panelist on Nancy’s show taught me how to think fast on my feet and zero in on the most crucial points — because you don’t have a lot of time to make your point.”

After honing his psychological perspective on national television, Dr. Seth now runs a private practice as a licensed clinical psychologist and shares his dating advice through blog posts.

Dr. Seth made a name for himself on television because of his down-to-earth and memorable way of speaking about psychological principles. He can analyze relationship behaviors, for instance, in clear and compelling terms. Plus, he’s got a big personality that shines when he’s on camera giving advice. His attitude is direct and a smidge playful, so he sums himself up with the saying: “clinical truth with dramatic flair.”

“I use humor a lot,” he said, “to underscore certain critical points when I’m working with a client or explaining a psychological concept in the media.”

“If you want to feel more romantic with your spouse,” he wrote in a blog post for Psychology Today, “here’s a crazy idea: Do things that are romantic in nature.”

Over the years, Dr. Seth has cultivated a national reputation as a relationship and parenting expert.

In his private practice, Dr. Seth told us he sees a lot of professional adults who don’t have significant mental disorders but seek help regarding relationship problems or self-esteem issues. Currently, the clinical psychologist specializes in couples therapy, school threat assessment, and parenting. His light demeanor puts men and women at ease as he shares his professional opinions.

Dr. Seth is adept at speaking to all sorts of different people and giving clinical advice on a variety of subjects. “In community mental health, I work with children and adolescents at risk for violent behavior,” he said. “In my practice, most people come to see me for relationship issues or other life crises.”

In his book about relationships, Dr. Seth outlines a four-step cure for what he calls Relationship Repetition Syndrome (RSS). He said among the most common issues he has seen in the dating world is people repeating the same mistakes over and over again. He wanted to show daters how they can break the cycle, so he wrote “Overcome Relationship Repetition Syndrome and Find the Love You Deserve.”

“Great informative book,” Veronica Escobar wrote in a review on Amazon. “I wish I had found this book earlier. I could have saved myself from poor men/relationship choices.”

“My book has now sold about 10,000 copies,” he told us. “I am so proud to know that it has gotten in the hands of so many people and can potentially help make their lives together.”

The accomplished relationship expert also lends his expertise to top lifestyle blogs, including Psychology Today and the Huffington Post. His insights have been featured in dozens of informative articles through the years. In a recent blog post on eHarmony, Dr. Seth gave advice about specific dating scenarios. He concluded, “Asking questions clearly and directly is the best way to get the information you need and to reduce the anxiety everyone feels in the beginning stages of dating.”

You can also find Dr. Seth’s tips in his relationship and parenting blog. In thoughtful blog posts, he discusses salient dating topics, including self-confidence, neediness, and attraction. His writing combines psychological principles with concrete solutions so readers gain a full understanding of how to address particular dating and relationship obstacles.

“I get a lot of emails from people who have read my book or the articles I’ve written,” he said. “They share that it has totally changed their perspective on an issue and helped them change. That makes all the time I spend writing worth it!”

From a young age, Dr. Seth Meyers took an interest in psychology and started a journey to help people deal with emotional issues. Today, he has a national reputation as a clinical psychologist who calls it like he sees it. Whether he’s advising a couple about relationship anxiety or talking to a television audience about Angelina Jolie’s weight loss, Dr. Seth gives a thoughtful analysis of what’s really going on beneath the surface.

In addition to his blog, private practice, and television appearances, the trained psychologist continually looks for ways to reach out to singles and couples everywhere. In the next year, Dr. Seth is looking to scale up his trainings and workshops to give his clients more hands-on guidance on personal issues. He’s also starting to work on his next self-help book, which will focus on parenting.

“Overall, my goal is to continue to help people gain greater self-awareness and insight into themselves,” he said, “because that’s the real root of how you start the process of change.”