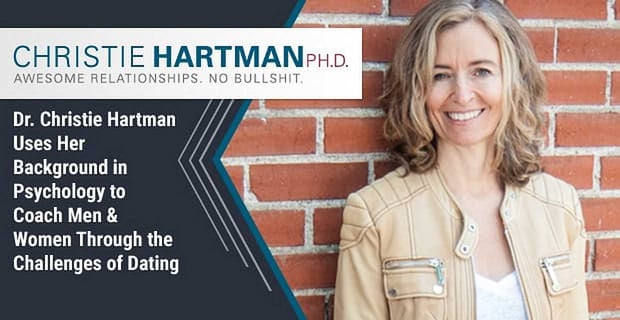 Dr. Christie Hartman Uses Her Background in Psychology to Coach Men & Women Through the Challenges of Dating

The Short Version: Dr. Christie Hartman left her career as a scientist to tackle matters of the heart. She wanted to use her PhD in psychology to counsel singles on complicated dating issues, so she wrote a book about how to date separated and divorced men. Readers appreciated her down-to-earth tone and knowledgeable advice, and the book became an instant bestseller. Today, Christie coaches people one on one, explaining healthy ways to overcome dating weaknesses and lay the groundwork for lasting relationships. Her candid analysis helps daters recognize their mistakes, shift their perspectives, and develop strategies to improve themselves going forward. Whatever dating challenges you face, you can turn to Christie to discover concrete solutions grounded in deep psychological understanding.

Dr. Christie Hartman calls herself an escaped scientist turned relationship coach. Her playful sense of humor and undeniably impressive credentials make her stand out in the dating industry. She earned a PhD in psychology from the University of Colorado and worked as a scientist for over a decade before deciding her true calling was as a wordsmith.

Christie wrote a self-help book about the obstacles of dating a separated or recently divorced man. Christie had experience in this matter, had learned about the prickly issues involved, and hoped to shed light on the best practices, warning signs, and potential deal-breakers that can come up when building a relationship with someone who’s carrying baggage from a previous marriage.

“Dating the Divorced Man” gets straight to the point in classic Christie style and empowers readers to build long-term connections with mature partners. Following the success of her book, Christie began lending her expertise on national television (including on “The Today Show” and “Fox News Live”) and in individual coaching sessions with single men and women.

The professional dating expert told us she straddles two perspectives on relationships because, although she’s well-educated in psychological principles, she never became a licensed therapist, so she avoided becoming out of touch with the realities and imperfections of human interactions.

“I’m not embroiled in the psychology business,” she said, “which I think makes me more relatable.”

For the past few years, Christie has made a name for herself as a quirky, blunt, and effective relationship coach based in Denver. She combines the listening skills of a therapist with the analytical approach of a scientist to provide a good balance of support and information to her coaching clients. All in all, Christie serves as an authoritative but down-to-earth guide for singles facing a variety of dating challenges.

“I like to delve into the deeper stuff,” she said, “so I’ll talk about people’s fears or their limits and really get into their psychology.”

A Supportive & Flexible Coach With a Strict No-BS Policy

You can consult with Christie over the phone or via Skype in coaching sessions that can run up to 90 minutes. Clients come to Christie on an as-needed basis. She doesn’t impose a set coaching plan upon single men and women in crisis. Instead, she lets them sign up for as many or as few sessions as they deem appropriate.

Christie said some clients come in every week, while others go through the initial consult, learn what they need to know, and don’t come back for over a year. “There’s no formal structure,” she said, adding with her characteristic candor, “It’s not a great moneymaker, but I’m OK with that.”

During the first part of her coaching sessions, Christie makes a point to just listen to what’s bothering her client. She lends a sympathetic ear to their problems and does her best to understand the underlying issues holding them back in their relationships. Then, in the second part of the session, Christie offers a thorough diagnosis of what’s gone wrong and how to fix it.

Christie approaches her coaching sessions with an empathetic ear and open mind.

The relationship coach doesn’t beat around the bush. She equips daters with practical corrective steps they can put into practice as soon as they leave the coaching session. Christie said her approach to coaching is to combine heartfelt support with actionable solutions.

“I’m fine with tough love,” she said, “but the truth is regular love works better. I support people. No matter what crap they’re dealing with, I’m on their side.”

Coaching is a part-time gig for Christie, but she takes her work with divorced, widowed, and other singles very seriously. “I find it really satisfying,” she told us. “It’s my way of contributing to make the world a better place by improving one relationship at a time.”

Years back, Christie found herself in a relationship with a man who was separated from his wife, and quite a few issues arose between her, her love interest, and his ex. She had many concerns about the relationship, but her friends couldn’t help her because they’d never been in that situation themselves.

Driven to understand, Christie researched dating and divorce until she became the authority she had been looking for. She then wrote “Dating the Divorced Man” to help other women learn how to manage a relationship with someone going through or getting over a divorce.

Since the success of “Dating the Divorced Man,” Christie has penned several informational guides on navigating the dating world. Her books have touched on a variety of worthwhile topics, including online dating, attraction, mixed signals, red flags, and self-esteem. She makes straightforward suggestions to help readers avoid common dating missteps and get results in the modern dating scene.

“It’s Not Him, It’s You” tells single women how to identify and correct 10 dating mistakes.

Published in early 2010, “It’s Not Him, It’s You” struck a nerve with many readers and has gotten dozens of rave reviews. “Finally someone calls women out,” wrote Jeanette C. in a five-star review on Amazon. “We love to blame men, but it takes two. Christie gives us practical tips to help us keep our heads straight.”

Another reviewer said she rejoined the dating world after 25 years of marriage and learned how to be successful at online dating thanks to the honest and laugh-out-loud guidance in “It’s Not Him, It’s You.”

Christie emphasizes in her books the importance of taking personal responsibility for one’s own dating life and making an effort to improve. Her actionable dating tips have inspired thousands of single men and women to set themselves up for romantic success.

“Relationship problems are about us, not the other person,” she said. “So it’s important to work on yourself first.”

Over the years, Christie has become a prolific writer on the subject of dating and mental illness. Christie’s blog is full of unfiltered advice, pragmatic solutions, and meaningful insights for singles facing emotionally charged situations. The relationship expert believes good mental health and relationship success go hand in hand, so she endeavors to positively impact people’s lives by talking about anxiety, communication, emotional awareness, and other deep subjects through the lens of dating and relationships.

“What an interesting and important post,” wrote Andy S. in a comment on a recent article. “There is great information out there on mental health issues (and other topics you’ve been covering), but nothing I have seen that looks at how these issues affect dating and relationships.”

“Anxiety problems are a huge issue in dating because dating is so anxiety-producing.” — Dr. Christie Hartman, relationship expert and author

Christie tackles complex subjects with enthusiasm and authority, making it easy for daters to understand what makes relationships tick. “I just started and already the blog series has gotten a lot of traction,” she told us, “so I’m excited about that and want to see where it goes.”

By putting relationship quandaries in the context of overall mental health, Christie prompts singles and couples to identify psychopathology and then remedy bad situations according to proven psychological principles.

“A lot of the time, our problems boil down to some type of mental illness,” she said. “If you have an untreated issue, that’s going to fuck up your relationships.”

Christie isn’t a licensed therapist, but she can get to the heart of any relationship issues by drawing from her educational background in psychology. Her honest and learned perspective on dating is a breath of fresh air to singles who want to make a change in their love lives.

Whether you’re struggling to attract a date or commit to a partner, Christie can provide sage advice based on decades of study and personal experience. Her blunt, analytical, and supportive guidance helps singles understand what actions they need to take to get the results they desire in life. Christie’s coaching sessions, books, and blog are jam-packed with information necessary to dating success.

“My general feeling is that your relationships reflect who you are and your personal mental health,” she said. “If I can help people get their relationships on track, the rest of their lives will follow.”