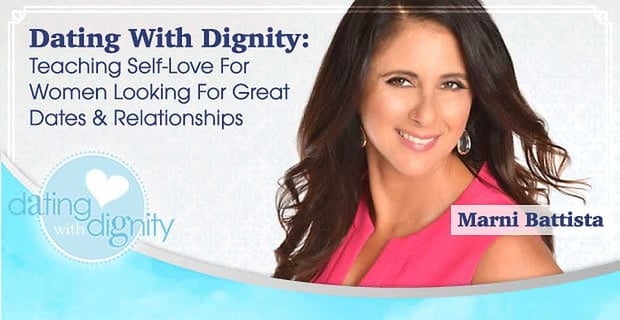 The Short Version: Love can be elusive for some women, even the ones who seem to have it all, but Dating With Dignity™ specializes in helping them find that missing piece of the puzzle. Led by Los Angeles-based dating coach Marni Battista, Dating With Dignity emphasizes the message that self-love is often a major step in pursuing and being pursued by high-quality men. Marni, as well as her team of experts, uses programs like Find Love Now™ and the D-Factor Process™ — which encourage women to look internally to determine what might be holding them back in their romantic lives. Visitors to Marni’s website can also sign up for a free copy of her new book, “Becoming Irresistible,” which expands on the concept that self-confidence can lead to amazing dates and relationships.

A big hurdle in the process of finding love is often just making an effort and getting out of our comfort zones. Dating can seem like a daunting undertaking, especially compared to a night spent in our apartments wearing sweatpants, munching on Doritos, and watching our favorite Netflix series. (I’ve definitely been there!)

Kellie was in a similar situation. She was from a small town and thought she was overweight, which made her feel like her chances of finding a great guy were limited. Then she decided to attend a live Dating With Dignity event in Los Angeles hosted by dating coach Marni Battista. When Marni got to the topic called “Comfy, Cozy Condo,” — which described how some single women know they want to change their lives and start dating, but find it easier to stay home and avoid the prospect of rejection, the message spoke to Kellie.

Marni Battista and her team teach women that loving themselves is essential to finding love.

Following Marni’s advice on self-love and self-improvement, Kellie decided to get involved with Habitat for Humanity to help better herself. One weekend when Kellie didn’t show up because she was sick, a fellow volunteer named Don reached out to see if she was OK. She admitted she wasn’t feeling well — a huge step for her as she was raised to always appear tough.

That same day, Don came over with chicken soup, and he’s been by her side ever since. With help from Marni and her team of dating coaches, Kellie found love organically, learning she didn’t have to be a size 2 or live in a big city to find someone perfect for her.

Marni, a Certified Life Coach with more than 25 years of personal relationship and dating experience, and her diverse team of coaches use an inside-out approach to help women improve their lives and become irresistible to high-quality men.

With a Teaching Background, Marni Takes an Educated Approach

Marni took somewhat of a circuitous route to becoming a dating coach. She earned her master’s in education from the University of Illinois at Chicago and was working as a preschool teacher when she had an idea for a book.

She had gone through a divorce after 17 years of marriage and wanted to write about dating and personal development. The book idea meshed with her abilities as a facilitator, and Marni said “there were fireworks” when someone pitched her the idea of becoming a dating coach.

Marni’s background gives her a distinct advantage because she uses familiar educational means such as workbooks and small-group interaction, to convey her message. Many of her typical clients are successful women who have been through college and grad school and are comfortable with her easily digestible approach.

Marni’s background in education has been pivotal in teaching women to find love.

“We use a lot of different modalities to create long-term learning — not a Band-Aid approach — and combine that with brain research about how people learn,” she said. “We create whole-person, transformational approach versus just teaching you a bunch of skills.”

A common trait of teachers is a thirst throughout life for continued education, and Marni has done that in more ways than one. She received training in the Core Energy Coaching Process from the Institute of Professional Excellence in Coaching, as well as training as a Facilitator by the Hoffman Institute, one of the world’s foremost organizations in personal development.

Marni has also continued to learn through her relationship with her husband, Jeremy, who she lovingly refers to as the “guinea pig” for her coaching.

“My clients help me be more mindful in my own relationship when they are talking about something that they need to work on,” Marni said. “I’m always fascinated that what I have to learn is pretty much the next thing that I need to teach.”

Find Love Now™: A Yearlong Program With an Inside-Out Approach

The signature program for Dating With Dignity is a yearlong program called Find Love Now, developed for women who feel like they’ve exhausted their options for romance. “If you interviewed our clients, they’d say I did everything and nothing worked except for this,” she said.

Her team usually brings in between 25 and 45 new clients a year. Marni said 62% of the women continue working with them after the first year, but not because they don’t find love.

“A lot of the women work with a lot of men,” she said. “They don’t really have a lot of great girlfriends that are positive and not competing, so they stay because they love being in a community of really smart, successful women.”

Others stay on for help with starting blended families, making sure their needs are met while learning to be understanding with stepchildren.

Dating With Dignity reports that 65% of the women who finish Find Love Now are actively going on two to four dates per week with high-quality men, and 35% are in committed relationships or engaged within six months of finishing the program.

5 Other Ways to Gain From Marni’s Expertise

Many women may not have the time to invest in Find Love Now, but Marni has several other programs and resources available that can help your love life.

1. The D-Factor Process™ — A 60-Minute Assessment Reveals How Men See You

Sometimes you’ll go on a date with a really attractive person, but there’s something that just doesn’t click. In an attempt to unravel the mystery of dating chemistry, the D-Factor Process was designed to answer the question of why you’re still single.

“What we find from doing the D-Factor Process is that we’re able to pinpoint within an hour what is that thing that is causing the right guys to not be attracted to you and also why you’re attracted to the wrong guys,” Marni said.

Marni joins Dating Den co-host Christian Anderson for a nine-part video and audio series that is designed to make women laugh and think.

The series features 10 dating experts answering questions from the audience and providing tips on reading men better and making your dates more engaging.

3. The Super Me 14-Day Challenge™ — Daily Modules That Unleash Your Best You

Marni’s two-week system revolves around self-improvement that comes to you in daily installments. Every day will unlock a new module that can be consumed as a video or audio file.

The Super Me 14-Day Challenge also provides a Super Me Journal that will ask you to reflect on questions that will help change patterns that may be holding you back in your pursuit of love. Also included is a Super Me Multimedia Guidebook, which has been called the Wikipedia of Dating With Dignity.

4. Get a Free Copy of Her Book “Becoming Irresistible”

Visitors to DatingWithDignity.com can sign up for a free copy of Marni’s book, “Becoming Irresistible,” which features three steps that can help you become a happier person and end up in a great relationship.

“Becoming Irresistible” has three steps to improving your love life.

“This book is really the heart and soul of what we do,” Marni said.

“When you master these three legs of the bar stool, then you have it all going on. It’s not about getting the guy or keeping the guy. It’s about being the woman that a great guy just cannot get enough of,” she added.

Marni is also excited about a new book she’s working on called “How to Meet a High-Quality Man Without Having to Go On 200 Dates.”

“We’re really going to reverse engineer not only the place to meet high-quality men, but we’re going to teach women to walk into Sunday football and be that girl,” she said, “because once you’re that girl, it’s easy to meet men.”

The Dating With Dignity website features free blog entries on a variety of dating tips written by Marni.

Some recent article titles include “When to Have the ‘Are You Taking Down Your Online Profile?’ Conversation with a Guy You’re Dating,” “7 Things Single People Are Tired of Hearing,” “5 Actions That Say He Loves You,” and “Why You’re Attracted to the Wrong Men.”

Marni Helps You Be the Woman of Your and His Dreams

A motivator for Marni is when she gets feedback from many of the women who have benefited from her teaching. She received an email last year from the happy Habitat for Humanity couple that brightened her day. Kellie was moving in with Don and wrote, “Oh my God, I’m literally moving out of my Comfy, Cozy Condo.”

After working with Marni and putting more effort into herself, Kellie went on to marry Don.

“What it really shows is that so many women will say ‘I can’t date until I’m a size 2’ or ‘The town I live in is too small,’” Marni said.

With help from Dating With Dignity, women everywhere can use Marni’s wisdom to learn that self-improvement is often the path to a fulfilling relationship.