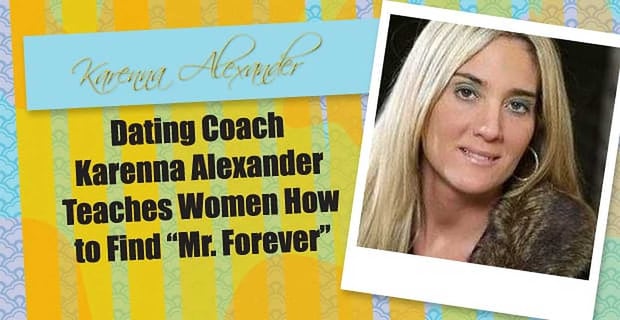 The Short Version: Dating and Relationship Coach Karenna Alexander provides smart and successful women with the tools they need to find lasting love. Karenna is a sought-after dating expert who shares her insights with various media outlets and coaches clients, individually or through courses, to find the man they truly desire. She gives women valuable advice on relationships and dating and helps them examine four key areas of their own lives so they can attract a loving, loyal partner. Karenna shares resources via newsletters, blogs, and social media with the goal of empowering women to make the switch from settling for “Mr. Right Now” to connecting with “Mr. Forever.”

Armed with a master’s degree in journalism from Columbia University, Karenna Alexander began her career covering topics like politics and crime for local publications. While she was writing, Karenna experienced a problem in her dating life and sought out mentors to guide her through it. As a result of the advice, her love life completely changed.

Thrilled with her success, she felt a calling to help other women with their relationships. But, since she was still working as a journalist, Karenna had to start her new venture slowly.

Karenna Alexander left her career as a journalist to help people as a dating and relationship coach.

“When I first started as a dating coach, I was also a full-time reporter. Coaching was my passion, but it was a side business at first,” she said. “Initially, I focused on helping women with makeovers, writing their profiles, and improving their dating strategy.”

But as she dispensed advice and information to help women, Karenna saw a way to make an even bigger difference in their lives.

“While strategies and outer appearance are important, I found that those weren’t the only essentials in dating,” she said. “So, I added more courses about focusing on your inner self — and those have been game changers for clients.”

Karenna became a full-time dating and relationship coach in 2014 when she opened up her business. She transitioned from journalist to relationship coach because she wanted to help women better understand men — and she hasn’t looked back since.

“The main reason I became a dating and relationship coach is that I realized how many men and women simply weren’t getting along — or getting together,” she said. “And it was for one reason: They didn’t understand one another.”

Coaching Helps You Identify the Four Areas of Attraction

“A lot of women — especially in today’s society — are confused about how to act around men. They think because they’re equal to men that they’re also the same in every respect,” she said. “Many women behave very aggressively around men, and it turns men off. Most men want to be with someone feminine, not someone who is as aggressive as they are.”

“Some clients only need help in one area, like their attitude; whereas they may already have their appearance down. Others may need help with their appearance as well as writing profiles and choosing online dating photos.” — Dating and Relationship Coach Karenna Alexander

And her life-changing advice covers a bit of everything.

Karenna has found that clients who were going at full throttle in four specific areas found their “Mr. Forever” much more quickly. Those areas are: The outer package (appearance), strategy, mindset, and action steps.

She meets with clients either in person or via phone, to identify which areas may be holding them back and design a plan for focused work.

Courses Allow You to Gain Clarity on “The One”

Karenna curates courses for women that address common dating issues, and she has received plenty of positive feedback so far.

“Courses that I created and started teaching last year have already helped many clients find great relationships with amazing guys. One woman who took the course in October 2017 married in May of 2018,” she said. “It was quick, but that couple had known one another when they were younger and reunited.”

“Getting Clarity on Mr. Forever,” is a 30-day course designed to give women insights on what they’re looking for in a partner. Karenna believes that when women are clear on what they want to be, the search goes smoothly.

The course examines finding the right guy, working through obstacles, and releasing past relationship baggage that can get in the way. It is conducted via email, so it’s easy and convenient.

“It’s a good course to take if you want a taste of my coaching,” Karenna said. “It’s one of the most affordable courses out there; it’s extremely effective, and packed with key information. It includes dating strategy help and so much more.”

Karenna’s second course, “MAN-ifesting Mr. Forever,” is a more in-depth and personal tutorial for women who find themselves repeating the same mistakes in love. Karenna designed the course after noticing a pattern with a number of beautiful women who weren’t meeting high-quality men.

“Many women have the strategy down, but they fumble because they don’t have the right attitude or don’t think they’re worthy,” she said. “The principles you learn in this course are the missing link for so many ladies.” The course lasts six weeks and includes phone and Skype coaching in addition to lesson plans.

Both courses have brought women happiness and love. “Karenna helped me see the negative patterns I had while dating and in relationships. Since following her advice, I feel so much freer and healthy about how I behave with men. I can’t thank her enough,” said one participant, Jessica, in an online testimonial.

Another client, Michelle, also wrote that she had experienced transformative results in record time.

“Karenna gave me a crash course in understanding men, and I immediately realized what I was doing wrong. We worked on my look, my mindset, my actions, my strategy, and I met a great guy in four months. We got engaged after nine months! It never would have happened without her,” Michelle’s testimonial reads.

To Access Karenna’s Tips Anytime, Check Out Her Online Tools

In addition to coaching and courses, Karenna Karenna offers an informative blog that includes topics like commitment, online dating best practices, and style tips, among many others. The blog contains some of the same actionable advice that Karenna is known for. She also pens a newsletter and engages with her followers on social media.

She also recently developed her own quiz for daters to help them see if they’re on the right path, and it’s based on what she’s learned over the past 15 years of coaching.

Karenna continues to expand her coaching practice to help more men, too, because she said she believes her methods can work for both sexes.

“I worked exclusively with women for years, and I wanted to share all the secrets I learned about being in a successful relationship. But, over the last few years, I have branched out to helping men because so many have requested my help,” she said. “They want to know what they’re doing wrong, and I realized I knew what women were looking for — inside and out — as I am a woman, and I talk to women about their needs and desires all day.”

And Karenna continues to focus on helping both women and men weed out time wasters, get off their hamster wheel, and feel confident about dating.