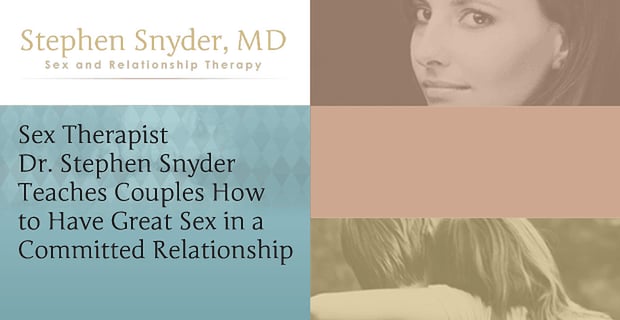 Sex Therapist Dr. Stephen Snyder Teaches Couples How to Have Great Sex in a Committed Relationship

The Short Version: For more than 30 years, sex therapist Dr. Stephen Snyder has worked to find better ways to help people get more satisfaction in bed. Now, he’s written a book, “Love Worth Making,” that ABC News Chief Medical Correspondent Jennifer Ashton said “does for sex therapy what Hamilton did for the Broadway musical.” In addition, women’s health guru Christiane Northrup calls “Love Worth Making” “hands down, the most practical, fun, and empowering book I’ve ever read on how to have a fabulous sex life in a committed relationship.”

What’s the most important thing to keep in mind when you’re dating, when it comes to sex?

Besides consent and condoms, of course.

According to New York City sex and therapist Dr. Stephen Snyder, the main thing is to pay attention to your emotions.

Dr. Snyder said he decided to write his new book, “Love Worth Making: How to Have Ridiculously Great Sex in a Long-Lasting Relationship,” because he couldn’t find anything good to recommend to patients about sexual feelings — a subject that he said still isn’t talked about enough.

“There’s been decades of research now into the mechanics of arousal,” Dr. Snyder said. “We understand hardness and wetness better than ever before. But hardness and wetness aren’t what make great sex. It’s your emotions, more than anything else, that usually determine whether sex is satisfying or not.”

When Dr. Snyder set out to write about the emotional aspects of good lovemaking, he realized this was mostly unexplored territory and there wasn’t much written on the subject. So he started exploring on his own.

Dr. Snyder began asking his patients to describe in greater detail what sexual arousal actually felt like. At first, he found the results hard to understand.

“People forget that during really good sex, you’re supposed to lose IQ points. Instead, most couples tend to focus on orgasm — making sure both people get to climax — which, to most sex therapists, is the least important part of sex.” — Dr. Stephen Snyder, Sex Therapist and Author

Eventually, he said, the pieces started to come together. “I began to realize that sex is infantile,” he said. “The emotions that get stirred up during really good lovemaking are a re-awakening of very early non-verbal feelings of deep satisfaction we experience with the first people who rocked us, held us, and told us we were wonderful.”

Good sex, Dr, Snyder concluded, involved a regression to a more infantile state of mind. If you remember the greatest sex of your life, chances are you’re remembering a time when you were able to regress most completely. In his book, he calls this “getting dumb and happy.”

“People forget that during really good sex you’re supposed to lose IQ points,” he said. “Instead, most couples tend to focus on orgasm — making sure both people get to climax — which to most sex therapists is the least important part of sex.”

Men and Women in the 21st Century

Dr. Snyder said sexual patterns in couples have changed in recent decades. “It used to be that I saw more couples where the female partner had lost desire,” he said. “Now, very often, it’s the male partner.”

“From what I can tell, a lot more men have gone missing in bed,” he said. “Some days I hear from so many women about this, that it feels they all must be sharing notes.”

Dr. Snyder also wonders whether recent changes in male-female power dynamics might be playing a role. “Women are out-performing men in higher education, and, often, in the workplace,” he said. “I think a lot of men these days feel intimidated by their female partners.”

“Men tend to be worried about disappointing women,” he said. “If a man feels his female partner is disappointed in him, he’ll often just withdraw. Which will tend to make her upset and angry. Which he’ll take as confirmation that he can’t please her. Which is, of course, totally nuts, since the only reason she’s angry in the first place is that he hasn’t touched her in weeks.”

Dr. Snyder said the sequence of events described above is a good example of what he calls a “sex-knot” — where each person’s natural reaction just tends to make the whole situation worse. There’s a section at the end of “Love Worth Making” entitled, “Eleven Classic Sex-Knots, and How to Untie Them.”

Making the Lessons of Sex Therapy Available to All

Dr. Snyder said he originally intended “Love Worth Making” for people who couldn’t afford private counseling — or who lived too far away to see him in the office. But after writing the first few chapters, he started handing them out to individuals and couples in his practice, and many patients told him it was valuable to have something to read and refer to between sessions.

“I don’t intend the book to be a manual of sex therapy, and it’s not a substitute for a professional consultation,” he said. “But it summarizes most of what I’ve learned from working with over 1,500 individuals and couples about taking care of your sexual feelings and your sexual self.”

The book currently has a large number of five-star reviews on Amazon and elsewhere. So, apparently, a lot of people are finding it useful — regardless of whether or not they ever end up seeing a sex therapist.

“Love Worth Making” is available at popular online retail outlets including Amazon, and wherever books are sold. Or you can visit Dr. Snyder’s website where you can download and read Chapter One of his book for free.