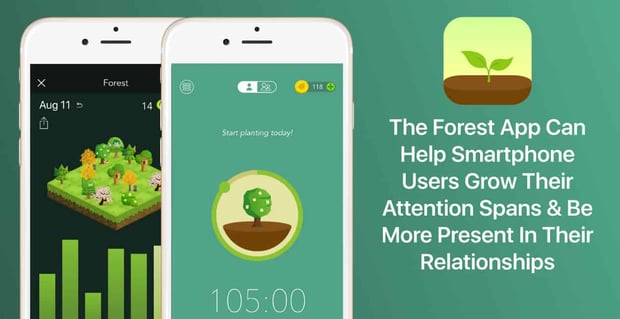 The Short Version: Need a break from clicking, swiping, and scrolling? The Forest productivity app can offer a breath of fresh air in a fast-paced digital landscape. Since launching in 2014, Forest has been a driving force behind an unplugging movement that has spread from China to the U.S. and beyond. Forest’s fun, gamified interface rewards people for setting their phones aside by giving them coins they can use to plant trees in real life. This is a great opportunity for couples and families who want to get away from their phones and focus on one another.

In 2014, Marcus Pi and Amy Cheng put their heads together to create Forest, an app designed to fight smartphone addiction. Too much screentime could disrupt and damage personal relationships, leading individuals to feel disconnected from their daily lives. Marcus and Amy sensed the seriousness of this issue among their fellow peers and friends and decided it was time to step in and do something about it.

Forest turned unplugging into a game by featuring a slow-growing sapling that will eventually sprout into a beautiful tree if the app is left on for enough time. Participants earn coins for every tree successfully grown in the app, and they can use those coins to plant actual trees in Africa thanks to Forest’s partnership with Trees for the Future, a Maryland NGO tree-planting organization.

Marcus and Amy designed Forest to be a win-win scenario for both individuals and the environment: Smartphone users enjoy a break from their devices, and they earn the chance to plant seeds in forests around the world.

Forest prompts users to cut down on screentime and pay attention to surroundings.

The app grew slowly at first. It took time for Marcus and Amy to spread the word about Forest and entice users to set their phones aside. As the years passed, the app branched out to impact students, couples, employees, and other productivity-minded folks. Eventually, it became a featured app on both the App Store and Google Play, and then it started to take off on a global scale. The app now has over 2 million paying customers, and it’s still growing.

Whether it’s keeping study buddies on task or encouraging daters to look at each other rather than their phones, Forest can ensure people stay in the moment and dedicate their time and attention to the things that matter most to them.

Singles and couples can use the app to increase the quality of their dates and avoid phubbing — phone snubbing — that special someone.

“Marcus and Amy believe that fighting phone addiction and getting into a good habit doesn’t always have to be painful,” said Marcus. “The mission of our company is to help users stay focused on the important things in life. With the use of gamification, Forest successfully persuades millions of users around the world to put down their phones.”

Embraced by 18- to 24-Year-Olds Around the World

The average smartphone user spends over three hours a day on his or her phone, checking it as much as 58 times a day. Smartphone addiction can get so bad that users obsessively glance at their phones while at work, with their families, and even on dates. These bad habits can limit a person’s productivity and damage their personal relationships.

Many digital natives have recognized the hazards of smartphone addiction and taken steps to limit how much screentime they get per day. Forest has become a popular option for young people seeking a break from texting, social media, and the online world, in general.

A majority of Forest users are between 18 and 24, and they tend to come from wealthy and tech-obsessed countries, including China, the U.S. and the U.K.

When you grow a virtual tree on Forest, you earn the right to plant a real tree in the world.

Forest users are serious about setting down their phones, and they rely on the Forest’s fun and engaging features to keep them on task. The app is simple and user-friendly. You select the length of time you want to stay off your phone — maybe it’s an hour-long study session or a three-hour date night — and then Forest’s virtual tree starts to grow on your screen.

“Once the tree starts growing, you cannot play on your phone, thus forcing you to pay attention to your work,” Marcus said. “If you use your phone during this period of time, your cute tree will die, and you’ll be drowning in guilt.”

If you successfully stay off your phone during the allotted time period, you’ll be rewarded with the lovely graphic of a full-grown tree and virtual coins that can be used to purchase different species of trees and flowers to add to your digital forest. Every time you grow a virtual tree on the app, it will be added to your digital forest.

Forest users can use the app on their own, or they can link their plants to other users and turn unplugging into a group effort. If one person gives in to the temptation to check his or her phone, the tree of all the participants will die. Couples can use this feature as a way of promising to focus on each other during their date nights.

Forest may seem like a run-of-the-mill productivity app on its surface, but, if you dig a little deeper, you’ll find a sustainability effort that has positively benefited many communities.

Trees for the Future has been a longtime partner of the Forest app, planting many trees in the name of its users. To date, Forest has led to over 543,000 trees being planted in the forests of Africa.

Forest is run by a youthful group of tech-savvy individuals.

Every time a Forest user puts his or her phone down, the app rewards that behavior by offering credits, which can be used to plant a real tree and make the world a little greener. That’s a powerful social incentive for users who care about the environment and their own mental health.

The Forest team is a young, dynamic group intent upon changing the world. They’re a worldly crew with professional backgrounds in technology, design, and marketing, and they pool their efforts to positively impact people’s lives.

“We work in a fast-paced and friendly environment,” Marcus said. “We believe that a positive workplace environment is the key to boosting productivity and increasing the wellness of employees, so we’re always finding ways to boost good vibes in the office.”

Forest is very much about a work-hard and play-hard mentality. The team goes on company outings and retreats to bond together and let off steam, and then they burn the midnight oil dreaming up new ways technology can reinforce good habits and instill good values.

Along that vein, the team has unveiled SleepTown, an app that uses a similar gamified system as Forest (but you’re building houses and neighborhoods, not planting trees) to support people in reaching their sleep goals. “What a cool app!” said one user. “Very effective at motivating me to stick to a sleep routine.”

Forest has battled smartphone addiction by giving people an incentive to unplug more frequently and cut down on their screentime. That’s been good news for personal mental health, study habits, relationship values, and environmental efforts.

Forest has over 2 million users and has been named one of Apple’s Amazing Apps.

The app boasts a 4.6-star rating on Google Play and a 4.9-star rating in the App Store, making it a top-of-the-line resource for productivity-minded users. Many students have written reviews saying the app helped them focus on their work, and some couples wrote to say the app helped them focus on their partners. Forest can inspire couples to spend quality time together and stop letting their phones distract them from intimate moments.

One woman said she felt neglected by her boyfriend because he always seemed more attached to his iPhone than to her. She decided to introduce him to the Forest app in hopes that he’d put his phone down and pay more attention to her. And it worked. Her boyfriend soon had a forest full of beautiful trees and flowers, and his relationship with his girlfriend flourished as well.

Forest tracks how often users take time away from their phones.

Jenelle Peterson said she often gets distracted during her day, but Forest gave her the motivation she needed to stay on task. “Forest blocks me from my most common distraction by threatening me with the horrifying fear of murdering my precious baby tree,” she wrote. “The app is cute and easy to use.”

“Nothing else I could find gave me a sense of accomplishment for not using a phone,” said Urvansh M. in a review. “This app is helping me log my study hours subject wise, and it’s really, really satisfying to see your entire forest. Happy planting.”

“It has changed my habits and changed my life,” said Gurjot S. “Hats off to the one who created this app.”

“I used to find it so hard to pay attention in class,” said a Forest user who was diagnosed with ADHD. “Now, with Forest, I’m finally regaining control of my life.”

The Forest team is proud to play a role in people’s lives. “We have many users writing to us saying how Forest has saved their relationships,” MArcus said. “We’re just really happy to know that our product is making a difference and bringing hope to people in need.”

Forest Can Plant the Seeds for a Fruitful Life

Forest has blossomed in the last few years and attracted a huge following in China, the U.S., and beyond. Despite its global success, the team has stayed true to the app’s roots and stuck to its founding mission to inspire healthy habits among smartphone users. With its fun features, Forest can help people commit to spending more time living in the moment and less time glued to their screens.

Looking to the future, the team intends to inspire further growth by introducing the app to schools and companies where staying focused is of critical importance.

In the meantime, couples can continue using Forest to strengthen their relationships and make their time together that much more beneficial and rejuvenating.

“Forest not only helps students stay focused on their studies, but it also helps couples rebuild their relationships,” Marcus explained. “By using the feature to plant a tree together when out on a date, couples can finally put down their phones and focus on each other — since this feature requires the efforts of all participants.”