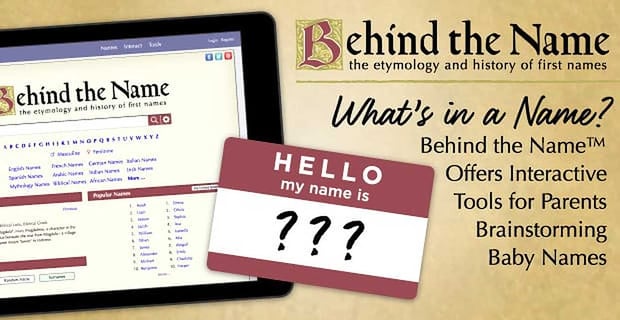 What’s in a Name? Behind the Name™ Offers Interactive Tools for Parents Brainstorming Baby Names

The Short Version: By naming a child, parents create the first piece of his or her identity. It’s a lifelong gift, and it’s important to get it right. Behind the Name has fun and informative resources to assist people searching for the perfect name. Since it was launched over 20 years ago, the website has compiled the etymology and meaning of more than 20,000 names. If you want a common name for your child, you can check the website’s rankings of the most popular names in any given year and country. If you want a name with a good track record, you can refer to the Namesakes section, which lists the names of historical figures, literary characters, famous athletes, and other notable people. If you don’t know where to start, you can use the Random Name Generator to let destiny choose a name based on your search parameters. From the message boards to the name translator, Behind the Name’s features provide tons of useful and entertaining resources to help you pick out a name with a special meaning behind it.

When my parents were expecting their first child, they reached an impasse over what to name him. My mom, all-star teacher that she is, favored the name Ashton, after one of her fourth-grade students. My dad wanted the name Travis, after the main character in “Old Yeller.”

My dad thought Ashton was too uncommon a name, and my mom thought Travis was too depressing a reference. After a fruitless debate, they decided to take a break and get dinner at a hole-in-the-wall seafood place. They parked facing a brick wall, where a bit of graffiti caught their attention.

Not five feet from their car was the word Travis in yellow spray paint. No other symbols or words. Just Travis. My parents took it as a sign, and so my big brother has a graffiti artist to thank for his name.

If the internet had been around when my parents were battling it out over Ashton versus Travis, my dad could’ve looked up the names and discovered that Travis was actually the 49th most popular name in 1986. Ashton, significantly less common, was ranked 548th in the US. With that information, my dad could’ve made a compelling case for why Travis is the better of the two names.

Choosing a name based on sound reasoning can be more meaningful than relying on coincidence as my parents did. Behind the Name, a useful website for soon-to-be parents, is a comprehensive database of names from all around the world. The site delves into any given name’s etymology, history, meaning, and popularity, all well-organized for easy browsing. Plus, visitors can look up surnames on the site — in case there’s a debate about whose name to take when married or which surname to pass along to a son or daughter.

“Picking a name is important because your child is going to bear it for a lifetime,” said Mike Campbell, Founder of Behind the Name. “It’s important to find a name you like — you don’t want to have regrets.”

On Behind the Name, visitors can search for a given name or browse by letter, gender, or culture.

Behind the Name’s audience skews female, with a definite youthful bent. Not all visitors are parents-to-be. People can come to this site for a number of reasons. Maybe you’re a romantic wondering what your crush’s name means or maybe you’re a writer looking for an evocative name for a character in a story.

Whatever the reason, Behind the Name can satisfy your curiosity by providing interesting tidbits about the world’s most widely used names. If you don’t find a certain name on the site, you can submit a given name here. More names are being added all the time, so future parents enjoy a diverse selection of traditional and modern names on Behind the Name.

An Extensive Database Started in a Dorm Over 20 Years Ago

Behind the Name got its start in 1996 in Mike’s dorm room. The college student created a website called “The Etymology of First Names” in his free time. “It was only a hobby at first, an experiment really, because I had just learned HTML, and I wanted to practice,” he recalled. “I didn’t know much about names at the start. I just learned along the way.”

Mike and Tara Campbell run Behind the Name to help people learn about 20,000+ given names.

For about three years, Mike trekked to his school’s library to look up the meanings of names from reference books. He’d copy the information down in a notebook and transfer it onto his site, which saw about 60 daily views. “I’d like to think things have gotten a bit more sophisticated since then,” he said with a laugh.

In 1999, he changed the domain to BehindTheName.com, which established itself as an authority on the subject of names. Today, Mike and his wife Tara co-own the site and maintain an extensive collection of over 20,000 names. They grow the database through volunteer help and user submissions, keeping a close eye on current name trends around the world.

“In the US, we have almost 140 years of data about the most popular baby names,” Mike said. “Certainly the list from 1880 looks very different from today’s list. The potential pool of names has broadened somewhat [because] parents are picking more of a variety of names.”

Sometimes a big pop culture event can influence a name’s esteem. The name Colby spiked in 2001 just after “Survivor: Australia” aired and good-looking cowboy Colby Donaldson stole the show. Similarly, Lily and Luna both saw enormous growth in popularity in the wake of the Harry Potter series in the early 2000s.

The Random Name Generator is a popular feature on the site because it’s a fun way to narrow down a search for a name. You pick a culture and gender, select if you want to avoid rare names, and generate a random name that fits your search criteria. It adds an element of fate that superstitious parents (like mine) would really appreciate.

Behind the Name is an engaging space to root out good names. Other interactive tools include name themes and name translation, both of which help visitors come up with unique and meaningful names. After you’ve honed in on a particular name, you can do some in-depth research on it on Behind the Name. On the name’s page, you can look at visitors’ ratings (Do people think Mike is a common name? A serious name? A modern name?), check out namesakes (Mike Myers and Mike Seaver), and view the relationships it has to related names (Mike is short for Michael, and the Spanish version is Miguel) in the Family Tree.

If you want to talk out the pros and cons of a name, you can go to the site’s message boards for feedback and suggestions from everyday users. Sometimes they’ll have some background on the name or an anecdote to give you personal insight into what it’s like to have a certain name.

The Behind the Name message boards offer a friendly place to swap opinions about various names.

Hearing what people think of a name can be important to parents who want their child’s name to make a good first impression and not be the source of ridicule or embarrassment. A quick peer review can help you decide if it’s really a good idea to name a kid Justis or Periwinkle.

As Mike said, “Kids do fine with both unusual names and common names, but I would think twice before going too outlandish.”

Lists of Famous & Historical Names to Give Readers Ideas

Behind the Name is a fun place to browse through names. The site organizes names alphabetically, by gender, and by usage. You can also search by keyword or use advanced search tools to generate a list of names fitting your criteria (meaning, sound, origin, namesake, etc.). Maybe you want a three-syllable boy name with Italian origins and ranked in the top 1,000 names in the US in 2015. Behind the Name suggests Carmelo or Santino.

Additionally, the website lists name days, meaning first names associated with particular days of the year in some cultures, so you can select a name in honor of your child’s day of birth or a special anniversary. Behind the Name also compiled a list of name pairings for twins that are a little more clever than simply Jack and Jill. The names on this list make lingual sense due to etymology or meaning. And some are anagrams of each other!

If you’re having twins, Behind the Name suggests an array of creative and clever name pairings.

The Namesakes page highlights famous people associated with any given name. You can search by name or browse lists of notable athletes, saints, fictional characters, American Presidents, and well-known figures to find a name worth passing on.

“Volunteers contribute heavily in this area,” Mike told us. “There are lists of Olympic athletes, Oscar winners, people in the bible, world leaders, and so on, all keyed by first and last names, and searchable.”

Behind the Name is constantly adding new names as creative parents expand what a first name can be. Going forward, Mike also wants to make the site more mobile-friendly and is working on that in coordination with a freelancer named Jason Clauss, whose body of design work can be found here.

Behind the Name: Bringing New Meaning to a New Life

Choosing a name for a child is an important undertaking, but sometimes the way parents reach a decision feels arbitrary and more than a little silly. I mean, for all we know, my dad had one of his buddies drive over to that wall to spray paint the name Travis. But my mom prefers to call it fate.

Whether you name your kid after a relative, a fictional character, a flower, or a bit of scrawled graffiti, it’s worth investigating what the name means and who has carried it previously. Behind the Name can offer some much-needed context and feedback on over 20,000 names from a variety of cultures.

Behind the Name has useful background information on names from all cultures and time periods.

Behind the Name’s extensive resources give you the inspiration to choose the right name. All names have a history, heritage, and meaning. With the site’s search tools, parents don’t have to choose names at random; instead, they can take the time to research their favorite names and find one that means something special.

“Generally, it’s not very important to know the meaning of your name, but it is interesting,” Mike said. “At least I think so!”