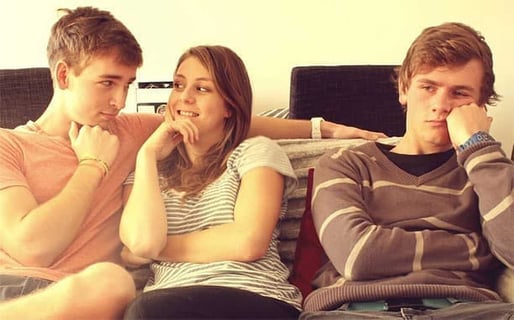 I am often asked by women seeking dating advice if it’s ever OK to date an ex’s friend. While there are a number of schools of thought regarding this dilemma, my position is irrefutable and unmovable.

I say it is never, ever OK to date your ex’s friend. It just leaves too many things to chance, things that could not only backfire and ruin your relationship, but also destroy the friendship he has with his friend in the process.

Be aware of the overlap.

Hooking up with your ex’s friend is a recipe for disaster, so if you happen to have a crush on one of your ex’s buddies, get over it. No matter how suave he is, no matter how dashing he looks in Ralph Lauren, and no matter how fantastic he smells, he is off limits, honey!

First of all, you deserve more than to be “passed around” by your ex-boyfriend’s posse, so set the bar a little higher, sister. Secondly, your dignity is far more valuable than some rendezvous with a hot guy.

Remember, this is a man who is friends with the guy who broke your heart. There are millions of available men out there. Get busy trying to find one who won’t serve as a constant reminder of your past.

Keep in mind, an ex is not defined as some random guy you had a one-night stand with two years ago. If you feel OK with the knowledge that a potential boyfriend’s friend has already seen you naked, go for it.

On the other hand, if you dated someone for a considerable period of time and his friend is hitting on you, don’t take the bait. No matter which way you slice it, dating your ex’s friend is going to create an awkward situation for all involved.

For starters, men are competitive by nature. Your new boyfriend will eventually want to know how he sizes up next to his friend, if you know what I mean. He will ask questions to try and figure out if he is a better lover, a better conversationalist or a better partner.

Plus, you will feel always feel weird when you run into your ex at social functions with your new man, and both men will feel uncomfortable. Yuck.

friend, you may have found a relationship loophole.”

Don’t do it out of spite.

Women are often guilty of sleeping with their ex’s friend in an attempt to make him jealous. This never works and the woman ends up looking — and feeling — pathetic.

If anything, this desperate attempt to win your ex back by throwing yourself onto his friend will only make him realize what he’s definitely not missing.

Ideally, when you and your ex break up, you should get as far away from him — and his friends — as humanly possible.

Now, if you happen to have found yourself head-over -heels in love with your ex’s friend, and you are already carrying on a fling with him, there’s only one thing left to do. You must have your new boyfriend talk to your ex, man to man.

Have him take the guy out for a few beers, very frankly tell him what is going on, and ask him if it would be all right for you to continue seeing each other.

If he adamantly objects, your boyfriend will either sacrifice your new relationship to save his friendship, or he will tell him he plans to continue dating you. Either way, their friendship will never be the same.

If you are going to try to make it work with an ex’s friend, you need to lay down some ground rules early on. Let him know you will not share intimate details about your time with his friend, and politely ask that he never question you about your relationship.

Also, tell him you will not tolerate any rude or objectionable treatment from your ex, and insist that he come to your defense if your ex ever gets out of line or behaves inappropriately.

Of course, there is also the rare circumstance where you and your ex are still friends and each of you has moved beyond the pain of your breakup. If your ex is truly happy in another relationship and open to the idea of you dating his friend, you may have found a relationship loophole.

While I personally believe nothing good can come from dating an ex’s friend, there are times when mature adults can come together and agree to put the past behind them. If you think you can beat the odds and make this tricky trio work, my hat’s off to you.

How to Date a Friend’s Ex

How to Cope with an Ex-Boyfriend Dating a Friend

How to Get an Ex-Girlfriend Back