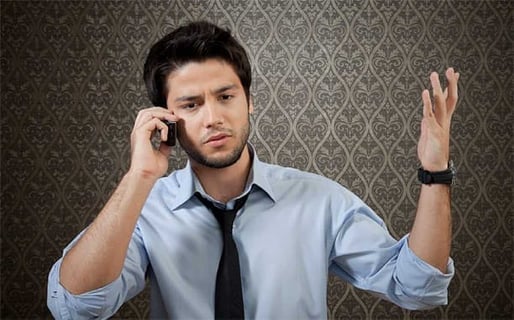 While text messaging may seem like a quick, convenient way to communicate with a partner, it’s also void of emotional intimacy and not the best way to develop the communication skills needed for a long-term relationship.

Of course, texts can be helpful down the road for a quick check-in or confirmation of a date, but they aren’t meant for nurturing a budding relationship.

Yet, women tell me all the time that text is often a guy’s preferred mode of communication, so they comply so they won’t look difficult. Sadly, replying to his texts will only further train him to rely on text and rarely gift you with a voice-to-voice connection.

The good news is that women have more control than they think. Training a man to text instead of call is simply based on old-fashioned behavioral shaping, that is, rewarding positive behaviors and ignoring negative ones.

And it’s important that you train him early in the relationship so you don’t have to break a texting habit down the road.

In the beginning of your relationship, respond to one of his texts by saying, “I prefer to use texting for quick messages about meeting up. I’ll pick up my phone if I see it’s you calling. J.”

This text communicates that you have boundaries and requirements and that you’d be happy to reward him by taking his phone calls without chastising him.

“Training him is about rewarding

The next stage is a little more difficult.

Most humans won’t follow a new rule until they see a consequence in action. He’ll probably still text you a few more times. And if you respond to those texts, you are rewarding his behavior and breaking the rule you just set up.

So keep your pretty manicured hand off your keyboard. Remember, part of the training is the testing phase. He wants to see how easy you are to manipulate.

Heads up. In this stage, he may even get angry and give you the silent treatment, stopping texts and phone calls all together to see if you’ll take the bait.

A player will likely fall off your radar entirely and you can thank your lucky stars that you shook him off before he gave you a broken heart or an STD.

The guy who’s into you still has you on his mind.

Just when you think you’ve fallen off his radar, he’ll send you a text, hoping that after this silence, you’re squirming to hear from him (which you probably are).

Again, here’s another test. You don’t need to nag him by repeating your rule. But you do want to let him know you are still reading his texts.

Respond with only one, simple character, a smiley face. That’s it. Nothing more. It says “I’m not mad, my phone is still working and I’m not giving into a text relationship.” Most importantly, it doesn’t say any words.

By now, this guy should realize that he needs to step it up and actually dial your number. And when he does, this is your opportunity to reward his good behavior.

Rather than picking up the phone with a, “So I see you learned how to dial a phone,” instead respond with a cheerful, happy, “Hey! I was just thinking about you.”

Training him is about rewarding all the behaviors you like. It’s simple human conditioning.

One last thought: You may need to do this training a few times until he sees you are serious.

But once you have a healthy bond and a growing trust, you can use text for the reason it was invented. To say things like, “Counting the hours until I see you again. J.”