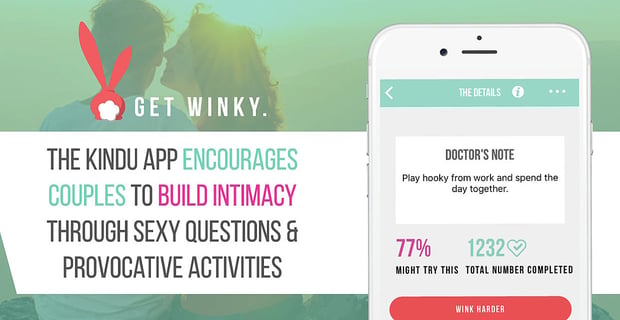 The Short Version: The Kindu app is designed to help couples reinvigorate their romance and get to know more about each other. The platform offers thousands of sexy and intimacy-building prompts that couples can follow to explore their relationships. The prompts are sorted into larger groupings of similar types of experiences and sent to each partner every day. Kindu’s mission is to improve communication while bringing more novelty to the lives of couples.

Couples in long-term relationships often sink into repetitive behaviors without either partner realizing it. But it often hits them when a date night — or even sex — feels more like they’re going through the motions than experiencing a passionate endeavor.

Sometimes, couples need a little inspiration to spice up their love lives. Those who seek out and explore romantic ideas stand to discover more about their partners, which can lead to both fun and a closer bond.

However, couples don’t need to come up with these ideas themselves. Kindu is an app that encourages couples to explore their sexual and emotional interests, discover new things about one another, and break from their romantic routines.

Kindu aims to rekindle the spark in couples through intimate questions and challenges.

Kindu isn’t designed for singles, which differentiates it from many romantically oriented apps. Instead, it was developed for those who want to mix things up in their relationships. Kindu helps users who may feel they don’t know their partner as well as they should, or those for whom date nights are getting stale.

“I want to open up communication,” said Thomas Nicholas, Founder of Kindu. “I want couples to laugh together, and, if they find out something new about their partners, that’s an exciting thing.”

When couples log on to the app, they can choose from packs — similar to virtual decks of cards — that interest them. Packs have titles including Celebration, Showcase, and Daily Deck, among other specialized titles, with each offering a specific type of card or challenge.

For example, the Super Bowl Sunday pack displays a card that reads: “Pick sides and get decked out in your team’s gear. Each time your team scores, you remove an article of your rival’s clothing.”

Kindu helps add excitement to activities that a couple may be doing anyway — like watching the big game — while also allowing them to learn more about each other.

Unlock Mysteries About Your Partner

The Kindu app, available on iOS and Android, offers thousands of activities to spur changes in routines, and couples can even try out new twists they’ve added themselves to activity cards.

Thomas told us the prompts aren’t always sexually themed. After all, couples can successfully recharge a romantic relationship by shaking things up both in and out of the bedroom. According to psychologists, couples who consistently seek out new experiences deepen connections within themselves and in their relationships.

“We’re trying to go beyond sexual exploration and dive into intimacy and having fun together in many of our packs,” he said. “We have more than 1,000 prompts, and there are only so many sexy prompts you can have.”

While Kindu helps users get out of relationship ruts and explore shared interests, at its core, the app encourages couples to learn new things about one another.

In designing the app, Thomas was inspired by writer Tom Robbins, who suggested that the key to long-lasting love was retaining a sense of mystery about your partner. Kindu helps couples recognize that they don’t know everything about their partner. This can renew the element of surprise and discovery that’s common in budding romances. Kindu’s prompts and questions often bring couples well outside of their comfort zones and may even be shocking.

“When you unlock a mystery about the other person that makes them unique, you stay interested in them,” Thomas said. “It’s cool to unlock these little mysteries with your partner and find that you’re connecting in a way you didn’t know you could before.”

In 2018, Kindu expanded its offerings in response to user desire for more content. When the process began, Thomas and his team wanted to understand what intrigued users about the app.

Based on that feedback, Kindu added new writers to produce packs and prompts on specialized subjects. These writers each have unique styles and voices that attract subsets of users with particular interests.

The app is versatile and open-minded enough that writers are given the freedom to describe love, sex, and romance in the way they want.

The app has decks for all types of relationships, and they’re created by a diverse group of writers.

“I’ve been pleased with the way my writers have taken to writing their packs since they all have their own interests,” Thomas said. “And I hope users will bond with their writing styles.”

The app also tries to accommodate all couples who may want to use it. To become more inclusive, Kindu is creating more prompts and packs for Spanish, Portuguese, and other non-English-speaking users. When users reported some Spanish prompts were inaccurate, Thomas and his team began working to remedy the issue.

Kindu is also moving away from producing packs that cater mainly to male-female couples.

“We offer more packs geared toward the LGBT community now,” Thomas said. “Some of our packs were somewhat hetero-centric, but we’re producing more content for our gay and lesbian users.”

Kindu: Improving Communication in Relationships Around the World

Kindu is rekindling sparks in relationships around the world. As the app evolves, Thomas said he wants to ensure that as many couples as possible can find what they’re looking for.

For example, Kindu recently let users unlock new packs in a different way: by watching advertisements rather than paying for the packs directly.

“In 2018, we launched some new programming to serve different packs in different areas,” Thomas said. “We let people access packs for free by seeing ads.”

The company continues to explore new content based on societal trends and user feedback. Kindu nurtures the creation of packs that are uniquely appealing to specific groups or types of couples. If users aren’t interested in certain packs or directions, the company wants to discontinue those lines of exploration in favor of finding more popular prompts.

“Working on the app feels really good, and part of the reason I created Kindu was to help people.” — Thomas Nicholas, Founder of Kindu

“If you try to appeal to everyone, you appeal to no one,” said Thomas. “With Kindu, it’s all about finding that balance and the areas where people want to go.”

What’s more, the Kindu community is invested in creating prompts that they may want to share with like-minded couples. At the moment, only professional writers create Kindu content, but Thomas said he intends to find a way to incorporate user-generated content equitably.

Thomas said he gets a sense of satisfaction from Kindu’s increasing popularity, and he sees the value in supporting couples in improving their communication.

“Working on the app feels really good, and part of the reason I created Kindu was to help people,” he told us. “With this venture, I don’t just help people on an individual basis; I help many couples all over the world.”