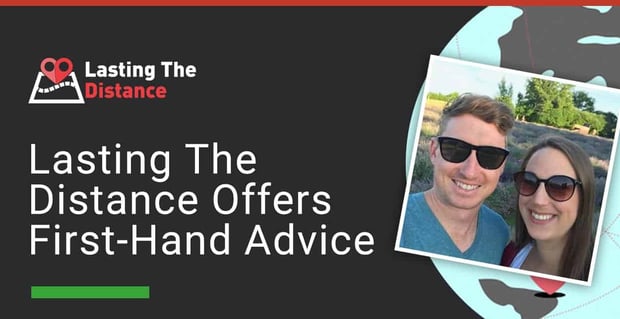 The Short Version: Relationships aren’t easy, but long-distance relationships can be particularly hard to maintain. Lolo and Nate, a couple who spent over a year with about 11,000 miles between them, know this from experience. And now they share the secrets to their success in an advice blog called Lasting The Distance. Lolo and Nate found clever ways to overcome the space between them and strengthen their love in the early days of their relationship. They currently live together, have two children, and work together to offer long-distance relationship tips and resources that help couples who are separated by miles but share common hopes and dreams.

The long-distance romance of Lolo and Nate — and the start of the advice blog Lasting The Distance — dates back to the fall of 2010.

The two were international students who had signed up for a study exchange program at San Diego State University. They had different majors and were from different parts of the world. Lolo, who is Canadian, was pursuing her bachelor’s degree. Nate, who is Australian, was working toward his master’s degree.

Lolo and Nate are seasoned relationship experts and bloggers who specialize in long-distance advice.

One night, Nate and Lolo met at a frat party and started talking. As fellow international students, they had a natural rapport and became part of the same social circle.

“We saw each other a lot, and it didn’t take too long that we wanted something more serious,” Nate said.

By October, they were officially a couple. However, Nate’s semester in San Diego ended the following January.

Before he flew back home to Australia, Nate made a promise to Lolo that he would wait for her, and their love would go the distance.

Of course, a passionate kiss at the airport doesn’t go very far in a relationship. It takes a lot more work to keep a long-distance relationship going, and that’s exactly what Lolo and Nate did. They lived up to their promise to each other and have now been together for over a decade.

Lolo and Nate share their experiences and takeaways on being apart on the Lasting The Distance blog. It’s a go-to guide for couples who are attempting to keep their love burning strong no matter how many miles lay between them.

The robust blog provides practical tips and advice that inspires readers to work on their long-distance relationships with their romantic partners as well as their friends and family members.

When Nate left for Australia, he did so with a plan to stay in touch with Lolo. The couple decided to set some ground rules for what they expected and hoped from each other. For example, they wanted to see each other at least every six months. But they needed to stay connected between visits as well.

“We wanted to give this a real go. What did we need to do to always be talking to each other and be in each other’s thoughts?” Nate said. “We planned ahead, being on the opposite sides of the world.”

How long were Lolo and Nate in a committed, long-distance relationship? About 18 months. They lived in different countries with time zones that made real-time communication nearly impossible. When one person was awake, the other would likely be sleeping.

To address this issue, they knew they sent daily emails and touched base with each other without needing to Skype or text.

Lasting The Distance provides insights on the essential practices of a happy couple.

In the summer of 2011, Lolo moved from San Diego to Quebec — and she continued to keep up with her email thread with Nate. Lolo said she loved waking up every morning with a new message in her inbox.

“We set a standard for ourselves to always be in contact and communicating no matter what, and that became a really good foundation,” the couple said.

As a result, Nate and Lolo were able to stay involved in each other’s lives despite living in different parts of the world. That constant contact made it much easier when they visited each other. Nate flew to Canada for a month, then Lolo enjoyed her first summery Christmas in Australia with Nate.

Lolo and Nate Use Strong Communication Skills to Show Love

Nate said the constant communication played a major role in strengthening their bond from other sides of the world.

“That put us in a position to be really comfortable with each other, so that when we would meet again, it was an odd feeling because we knew everything that was happening in each other’s lives,” he said. “There wasn’t that much awkwardness because we already had that connection.”

As a result, the couple stayed together until Lolo graduated and later moved to Australia. Having succeeded where so many other couples have failed, Lolo and Nate decided to start a blog to help long-distance couples reinforce their relationships. The blog launched in 2016 and has been growing ever since.

Lasting The Distance dispenses practical, useful advice — including 77 messages for a long-distance sweetheart and steps for navigating a K1 visa for anyone hoping to marry a United States citizen.

The blog answers common questions and concerns about long-distance love.

Today’s daters live in a globalized society with high-tech communication at hand, so it’s no surprise that long-distance relationships have become quite common. Young generations have embraced the opportunity to pursue their academic and career dreams across state lines or borders and still remain in touch with loved ones in other parts of the globe.

Nate said he has used search engine optimization strategies to understand the needs and interests of modern singles and couples who are interested in being long-distance.

“Keyword research gives us an idea how to give them what they’re looking for and deliver content to them that way,” he said.

Nate and Lolo have received plenty of feedback from couples who read the blog and participated in the seven-day LDR challenge. More than 500 readers shared their biggest challenges. As a result, the blog published content centered around date night ideas for LDR couples.

Lasting The Distance isn’t just about romantic relationships. It also addresses the long-distance bonds with friends and family members. The blog offers gift ideas for friends who are moving away.

Nate and Lolo have done their fair share of globetrotting and long-distance relationship building. They met in San Diego and stayed in touch despite living in different hemispheres. In 2014, after two months of backpacking through Southeast Asia, Lolo and Nate left Australia and moved to Canada. In 2018, they had the first of their two children.

This couple have come a long way from being nearly 11,000 miles apart, sending more than 1,000 emails, and committing to each other for 512 days of living apart.

“I wish there was more advice online when we started dating, and it’s good we can provide something that wasn’t available back then,” Lolo said. “It’s a big boost when you get comments.”

The couple is currently working on a redesign of the Lasting The Distance website. They want to build the sections geared toward friends and family, so romantic couples aren’t the only ones who can help their relationships grow. Nate said they are also gathering facts and studies to compile in a self-help book.

“There are so many types of long-distance relationships to have. Some are international, some are domestic. Some are just for college, and some start online,” Nate said. “We want to make sure we put something out there to help as many people as possible. We want to do something that’s really amazing.”

Almost 11 years later, Nate and Lolo have created a comprehensive resource for long-distance dating and relationships. Their core message is a positive and hopeful one: if it worked for them, it can work for you too.