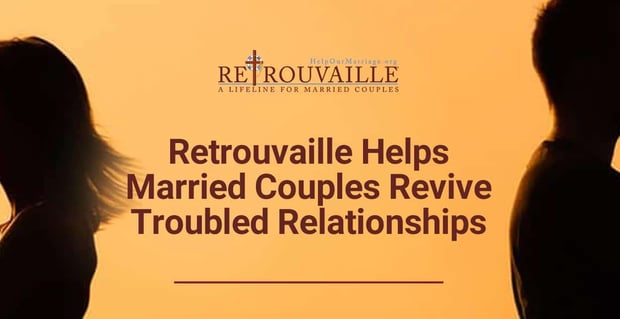 The Short Version: When married couples experience significant relationship problems, they may not have the tools to resolve them themselves. Peer support can help them focus on what is important and turn their attention back to their lifelong commitment. Retrouvaille is a nonprofit, Christian-based program that uses peer-to-peer sessions to help save troubled marriages. It often helps to hear that others have experienced trouble in their marriage, sought counseling, and emerged with stronger unions. Retrouvaille recently expanded its program to include virtual sessions that reach even more couples in need.

The American Enterprise Institute recently completed a study on marriages during the COVID-19 pandemic, and the results are eye-opening.

Of the thousands of married men and women surveyed, more than a third said the pandemic had increased the stress on their marriage. That’s on par with the 30% of couples who said they’re experiencing financial strain. The study also found that, even though couples were spending more time together, their sex lives weren’t improving.

Couples who had stable relationships before the pandemic may be experiencing more stressful interactions. Those whose partnerships were already strained may feel pushed to the brink.

According to the American Psychology Association, the divorce rate remains around 50%, but couples in troubled relationships may fight, plead, cry, wait, and hope for the best before they finally split.

Retrouvaille offers married couples a lifeline during those trying times. The Christian-based nonprofit is a ministry that provides peer-to-peer support around the world, and now, online.

The organization uses personal stories from couples whose marriages have endured significant hardship, many close to the point of divorce. Their stories aim to inspire and encourage other couples to mend their relationships with the new tools they gain from Retrouvaille.

“We offer love and hope for these couples on their journey so they can come back and have a fighting chance,” said Tony Ruiz, Retrouvaille’s International Deputy Coordinator. “Especially during the pandemic, some couples are in trouble, and it’s tough.”

Tony and his wife, Tina, served as Retrouvaille regional coordinators in California and now will be serving the organization to help globally. Tony said the couple’s work with Retrouvaille dates back to 1999 when their marriage was on the rocks.

At the time, Tony and Tina had been married for 11 years, and Tina was ready for a divorce. The couple separated for 16 months, and their on-again, off-again relationship was about to end.

“We come from a marital background with a lot of turmoil and distress,” he said. “For me, I didn’t think everything was really that bad. I thought everyone struggled, but the reality was our marriage was a train wreck.”

One day, Tony said his wife read about the Retrouvaille program in their church’s weekly bulletin. She came home intending to show it to Tony, but they got into an argument, and she ripped it up. But Tina still wanted to make it work, so she called and got the information a second time, and that was the charm.

The couple attended a retreat weekend in October of 1999, and the results were nothing short of miraculous. Tony said they discovered things about each other that helped them remember their deep love. Their relationship started to take a new turn, and it’s been growing stronger ever since.

Now, they’ve been married for 33 years, and they credit Retrouvaille for throwing them the life preserver they needed. Now, they help other couples overcome the same types of problems they had themselves earlier in their relationship.

Spouses of All Faiths Learn How To Strengthen Their Love

The Retrouvaille program is Christian-based Catholic in origin, but married couples of all faiths — or no faith at all — are welcomed with open arms. The organization also doesn’t turn anyone away because they can’t afford it.

The people who run the workshops aren’t licensed marriage counselors and that can benefit couples. Often, counseling can devolve into one person trying to prove that the other person is the problem. The blame game doesn’t help when you’re trying to save a marriage.

Couples like Tony and Tina share their stories at the workshops and explain the tools they used to turn their relationships around.

Couples who lead the workshops must first work together to write their life story, which is reviewed by a mentor couple. Then, the Retrouvaille team approves the story before it presents it to couples who are struggling in their marriages.

Tony said volunteering with the nonprofit is a powerful experience.

“I saw miracles. People sat in front of me who couldn’t stand each other and were in an ugly, nasty place,” he said. “They turned during the weekend program, and things broke open, and the skies were sunny. I couldn’t get enough. We decided that, wherever they need us, we’re going.”

Since the couple got involved, they have presented their story throughout the region and on the radio throughout the United States. They have shared the program’s importance of the program with many publications. They said their goal is to spread the word and help more couples stay married.

Retrouvaille volunteers typically organize transformational in-person workshops in communities worldwide. But during 2020, as the COVID-19 pandemic affected couples around the world, the organization changed the process to help more people. Retrouvaille held its first virtual workshop in July 2020, and Tony said it was a big success.

“It went much better than expected. It was phenomenal. We had 69 couples who sat in front of their computers eager to learn how to better their lives,” Tony told us. “Every couple came back for every post, and we knew it was really going to work.”

Couples can experience virtual workshops at different times, depending on their location. Most meet once a month, and some meet weekly on a Saturday or Sunday. Many couples offer to share their own experiences during the programs to inspire and encourage others.

“I’ve seen people who have been divorced 10 years go and get remarried. That’s always great to restore families that have been broken,” Tony said.

The nonprofit is quite busy, even as its focus has shifted to online. Tony said Retrouvaille hopes to hold an international conference in Mexico in 2021.

Meanwhile, as Tony and Tina move to be the International Coordinators, Tony said he still responds to the scores of emails that come in through the website asking for help with marriages.

“We’re going to continue to move forward in the best way we can,” he said. “We have a world full of volunteers and people who love the opportunity to get their marriages back. Our ministry wouldn’t be what it is without the love and dedication of all the couples throughout the world.”