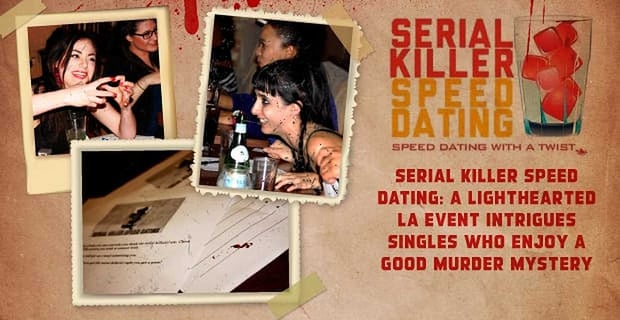 The Short Version: Speed dating has been around since the 1990s, and so many modern singles dismiss it as outdated and tedious. But, in August 2015, Abel Horwitz gave speed dating a makeover by creating horror-themed events for singles seeking a good time. Serial Killer Speed Dating brings eye-catching intrigue to the dating scene and invites attendees to solve a mystery by finding the fake killer in a crowd of dates. Single men and women chat for five minutes, vote for who they think is a serial killer in disguise, and laugh when the big reveal caps off the night. Daters who fancy themselves experts at reading people can put their skills to the test at a Serial Killer Speed Dating event, and, if they play their cards right, they might just come away with a killer date as well.

You know that feeling you get when sitting across from a complete stranger on a blind date? Like, kind of excited, kind of nervous, and kind of terrified that it’s all going to go terribly, horribly wrong?

When I first started dating, butterflies would cartwheel in my stomach as I tried to figure out if the guy across from me was crazy about me — or just plain crazy. Nowadays though, my dates don’t faze me. I’ve gotten used to the uncomfortable vulnerability of meeting a stranger in person. That’s just my Tuesday. I don’t sweat it at all, and that takes the terror and anticipation out of the experience.

Abel Horwitz founded Serial Killer Speed Dating  in 2015, and his events brought a creative twist to a long-standing dating process.

Dating has a lot of built-in drama, but it can get stale for date veterans who’ve gone through those emotional highs and lows many times. Fortunately, to spice things up, actor and writer Abel Horwitz has devised an ingenious event that combines elements of a murder mystery theater with speed dating. He calls it Serial Killer Speed Dating.

Based in Los Angeles, these events have delighted local singles since 2015. Abel said the idea came to him because he wanted to organize an event for Scare LA, a popular horror convention. He thought a speed dating event would be perfect because it would introduce single attendees to dates who share a common interest in things that go bump in the night.

At a party, Abel explained his idea with the creator of the convention, who also happened to be a close friend. She said he needed some sort of pull, something to tie the event back to horror. Another friend jumped in, saying “Throw in a serial killer!” And so Abel did.

He hired actors to show up and pretend to be serial killers. Not famous, actual killers, but heightened versions of themselves. A bit odd, but never too obvious. The mission of the speed daters was to spot the fake psychopath while they also searched for a compatible match. It gave the brief conversations purpose and added a bit of humor to the night. Abel said many singles broke the ice by saying, “I’m not a serial killer, and here’s why…”

After the first event, everyone agreed that Serial Killer Speed Dating was a lot of fun. Abel began hosting similar events every few months to help bring single men and women out of their shells. He said most attendees are 20-something or 30-something singles who feel drawn to the off-kilter, morbid, and comical tone of Serial Killer Speed Dating.

“The name is what sells it,” Abel told us. “Serial Killer Speed Dating. That’s the joke. It just snowballed from there.”

As a die-hard horror fan, Abel enjoys the thrills, laughs, and groans of a good haunted house or a camp murder mystery. After years of working with a theater group called Zombie Joes Underground, Abel saw firsthand how a good scare can bring a couple closer together and get new friends talking excitedly about how real the fake blood looks or what’s coming around the corner.

“I’m heavily involved in the haunted house community in LA,” Abel told us, “and I love immersive theater.”

Singles at Serial Killer Speed Dating have the chance to solve a mystery while seeking a date.

It seemed only natural for the horror buff to combine a theatrical element with speed dating. Abel had never thrown a speed dating event before the horror convention in 2015, but he was excited by the chance to bring people together in such a unique way. He’d gone to a speed dating event himself and saw how efficient and empowering it was for singles. “By the end of 15 dates, I was elated,” he said. “I felt more confident asking girls out.”

Abel’s positive experience convinced him that he could offer daters an even more engaging time by adding a murder mystery element to speed dating. He figured, you’re there trying to get to know people anyway, so there may as well be some game to it.

His first Serial Killer Speed Dating event made a killing — over 80 people showed up, many of them curious about how the event would work. When a theatrical and cheesy murder took place to start things off, everyone started laughing and cheering. The ice was broken, and a night of mystery and romance began.

“My events are a great way for like-minded people to meet,” Abel said. “Everyone there already has a shared interest.”

Plot Twist: Your Date Isn’t Actually Going to Murder You

Serial Killer Speed Dating keeps to many of the standard speed dating practices. Singles show up at a private room in a restaurant, bar, or meeting space, and have five minutes to chat with one another before moving on to the next person. At the end of the night, attendees mark down who they’re interested in seeing again. Abel then follows up with people for permission to share their email addresses with their mutual matches.

The events typically run for two hours and host around 30 people of all backgrounds and orientations. “I’m trying not to exclude anybody,” Abel said. “It’s just me running the events, and it’s a lot of work, but I’m very proud of it and want it to be open to everybody.”

Abel shows up to the events wearing a tuxedo because, as he says, you have to be classy. He gets everyone signed in and introduces the game element to the event — which kicks off with a dramatically staged murder.

Every Serial Killer Speed Dating event kicks off with a blood-curdling scream.

Serial killers are hiding among the attendees, Abel explains, and the daters’ job is to root them out and vote for who they think the “killer” is. At the end of the night, those who guess right will get a prize. Plus, the two daters with the most votes win The Golden Rat trophy (a plastic dollar-store rat spray painted gold) for being the Most Likely to Be a Serial Killer Without Actually Being a Serial Killer.

The room often fills with gasps and applause when Abel asks the “real” serial killers to step forward.

Note: Serial Killer Speed Dating is designed to be a little campy, a little tongue-in-cheek, and a lot of fun. It’s a playful way to meet a bunch of new people who have a similar sense of humor, think Halloween should be celebrated year round, and don’t take themselves too seriously.

“From the beginning, it was clear people were liking this idea,” Abel told us. “It’s a twist to speed dating. It gamifies it and gives singles a reason to be there.”

Singles Enjoy the Theater, the Thrill & the Competition

Abel told us he hopes to franchise his idea so singles all over the country can enjoy Serial Killer Speed Dating, but, for now, he’s content throwing his own fun events every few months and watching attendees loosen up together. Although Abel is still hoping for an email inviting him to a wedding from two people who met at his event, he said he has heard many stories of people dating and even falling in love at Serial Killer Speed Dating.

One single woman didn’t find her match at the event, but then met a guy on Tinder who’d won Most Likely to Be a Serial Killer Without Actually Being a Serial Killer. She saw the Golden Rat statue in his apartment, and she couldn’t help but exclaim, “I won that, too!” Turns out, they had more in common than they’d thought.

Oftentimes, winning the trophy is a point of pride for singles. It may sound odd to want to be voted a potential killer, but some attendees really get into the competition for that dollar-store rat and try to trick their speed dates into thinking they’re the hidden serial killer. “People want to play,” Abel said. “They want to have fun with this.”

It’s so easy to get stuck in a rut as a single adult. As I go from one indistinguishable date to the next, I can’t help but wonder “Where’s the mystery? Where’s the excitement? When’s the good part going to get here?” I want to go on dates that get my heart pumping and mind racing — and that’s why Abel’s macabre take on speed dating is so compelling to me. It may be ghoulish, but at least it’s original!

If you’re in LA, you can sign up to the mailing list to find out about the next Serial Killer Speed Dating event and liven up your dating life with a good murder mystery. These events offer an engaging way to break the ice, have a good time, and meet quirky singles in your area. Whether you come away with a date or a prize for guessing who the actor was, you’ll definitely have a night to remember at these frighteningly fun speed dating events.

“I like what I do,” Abel said. “It’s fun and silly, and it gives people the opportunity to meet one another. It feels like my creativity and hard work gives something important to singles.”