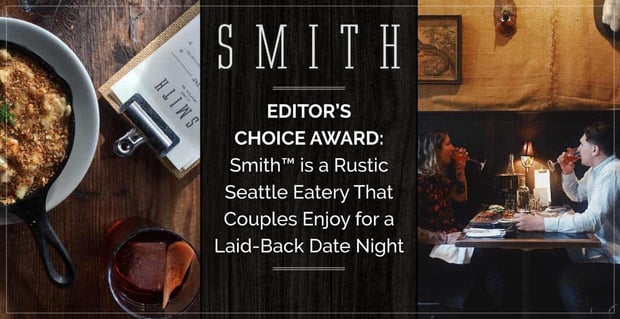 The Short Version: Couples in Seattle seek out Smith restaurant for its comfortable feel that’s perfect for date nights. Smith offers a unique environment in one of the city’s busiest neighborhoods, and its decor is inspired by the classic hunting lodge. The restaurant serves up traditional American dishes with a twist — including fresh takes on roast chicken, apple dumplings, and sweet potato fries. Couples can also order upscale cocktails, beer, or a bottle of wine while they enjoy Smith’s ambiance and food. For providing Seattle couples with romantic dining experiences, Smith has earned our Editor’s Choice Award.

Smith restaurant is located in Seattle’s lively Capitol Hill neighborhood, but diners are transported to an entirely different setting when they step inside. The space is designed to look like a vintage hunting lodge with animal heads mounted on the wall and dark, woodsy decor. The atmosphere helps couples quickly disconnect from their everyday lives, and each booth includes a small lamp that creates an intimate environment for a conversation.

“In the evenings, the candlelight from all of our tables makes our guests appear warm and glowing. And who doesn’t look good in candlelight?” said Marianne Ide, Owner of Smith.

In addition to Smith’s inviting atmosphere and tasty menu, the waitstaff is adept at ensuring guests have a pleasurable experience — which attracts many daters.

During its history, the restaurant has become more than a footnote in some love stories.

About 10 years ago, one couple got engaged at Smith just before one of the partners was deployed to Afghanistan. Thankfully, that deployment went well, and recently, the couple celebrated their 10th anniversary — again at Smith.

The restaurant also plays other roles in the lives of couples, as the owners and staff enjoy indulging their romantic imaginations for special events. Soon, the restaurant will host a Hogwarts-themed rehearsal dinner for a couple.

“I am already planning the floating Jack-o’-Lantern decorations,” said Marianne.

Smith has something for everyone, whether it’s a rehearsal dinner or a first date. Its dinner menu offers appetizers, small plates, main courses, and desserts, for diners with or without dietary restrictions, and the full bar serves up carefully crafted cocktails, beer, and wine.

Serving Up New Takes on Classic Food and Drinks

When couples arrive for a date night at Smith, they often start with one of the restaurant’s memorable cocktails, which offer fresh twists on classic flavors. The Ruby Collins, for example, is made with gin, rosé, rhubarb, pink peppercorn, lemon, and soda. The Masala Mule, a play on its Russian cousin, includes masala chai-infused vodka, lime, and ginger beer.

“Start with a couple of our craft cocktails or a bottle of Lemberger wine, and you are going to have an excellent first date,” Marianne said.

Marianne also suggests ordering small plates to share with your partner. Some popular options include a cheese plate with candied nuts, pickled vegetables, and bread. Daters can also order vegetable fritters, sweet potato fries, and macaroni and cheese to get a full range of the eatery’s offerings.

Couples can connect over fresh cocktails, appetizers, and shareable meals at Smith.

Those with bigger appetites often opt for the Smith burger, which was recently named one of the best in Seattle. And that elevated fare starts with an innovative culinary team.

“Our chef, Lucky O’Donnell, and sous chef, Sam Staub, are an intensely talented pair. When we met Lucky and Sam, they were itching to try new things and experiment with flavor and texture,” Marianne said.

The restaurant also uses local produce as much as possible, and partners with The King’s Garden, an organization that connects at-risk youth with farming opportunities.

Smith also has classic dessert dishes — with a twist, of course, and its apple dumplings with cardamom caramel are hard to resist at the end of a meal.

“I think the best part of dining at Smith as a couple is that we have something for everyone, meat-eaters or vegetarians,” said Marianne.

An Established Restaurant with a New Lease on Life

Smith has been an established eatery since 2007. But before that, the space where Smith is thriving had been a decade-long revolving door for a range of eateries. Many previous establishments had failed there after just a short time.

However, when searching for a space for her new establishment, Seattle restaurateur Linda Derschang fell in love with its dimly lit interior. She saw its potential and decided that she could realize her vision by transforming the space into a hunting lodge-themed restaurant.

A few years later, the popular Smith’s became a well-known restaurant looking for a buyer. That’s when Marianne and her partner Christopher Forczyk entered the picture. Previously, the pair had worked at restaurants in New York and Washington, D.C., before moving abroad to teach in Yemen, Thailand, and Pakistan, among other places. When they moved back to the United States, they hoped to return to the restaurant business.

Marianne Ide and her partner, Christopher Forczyk, purchased Smith after falling in love with its atmosphere, food, and service.

Their timing was excellent, as Linda had recently decided to sell the restaurant to spend more time in New York. Christopher and Marianne found what they were looking for in Smith.

“Smith completely charmed us with the hunting lodge décor, the lovely, personal service, and of course, food to die for,” said Marianne.

Marianne and Christopher also appreciated the ties the restaurant had with the city — both past and present. Linda had used reclaimed wood from a local high school in Smith’s decor. The door to the back of the restaurant still has the word “library” on it.

Additionally, one of the reasons that Marianne and Christoper decided to buy Smith was because of the time and attention that waiters gave to guests.

“Harrison, one of Smith’s outstanding waiters, was really interested in our travels and asked all kinds of questions. That was, of course, before he knew we were potential buyers,” Marianne said.

With such friendly staff, it’s no surprise that Smith also has a diverse crew of regulars. Marianne said that couples, young families, older adults, professionals, and hipsters have all found their place at Smith.

“We are proud of the fact that our regulars reflect the diversity of our neighborhood. In fact, one of our first tasks as new owners was to install changing tables in both bathrooms,” she told us.

Other guests became regulars because they want to experience more of server Bonnie’s sense of humor or have another taste of bartender Austin’s inventive cocktails.

“Our staff accepted the challenge of new ownership with good cheer and offered plenty of support,” Marianne said.

Over its nearly 15-year history, Smith has become a staple on Capitol Hill, but Marianne and Christopher still plan to make some changes to the classic restaurant. First, they plan to expand into catering, so that locals can bring Smith food to their events. The team is also planning what it calls a “streatery,” with tables and chairs on the sidewalk in the summer months.

“We want our guests to soak up some of the sunshine with their mushroom benedicts and a mimosa or two,” said Marianne.

Smith still retains the vibe that has helped it play such an important role in many relationships. Marianne said she values that history in making the restaurant what it is today.

“I am really touched that Smith has played such an important role in so many lives, and I’m so excited to help plan their wonderful future,” she said.