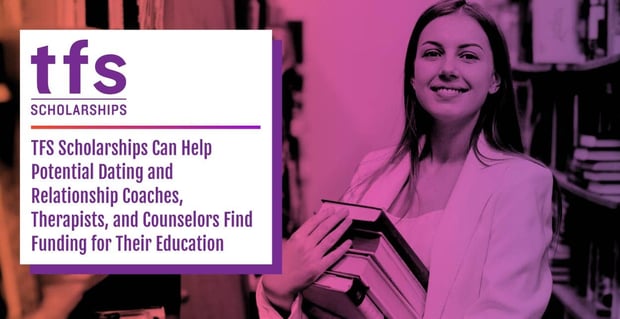 The Short Version: For many students, the most challenging aspect of attending college isn’t the homework, it’s the cost of tuition and books. They often apply for loans that can take decades to pay off and cause them substantial stress well after they graduate. TFS Scholarships makes it easier for those students to find funding through its non-commercial scholarship database. TFS Scholarships has grants and awards for any type of prospective student — including those who want to become dating and relationship coaches, couples therapists, or divorce and family counselors.

Many people who consider filling out a college or university application — whether immediately following high school or as an adult — face the same challenge: the ultimate cost of that education. According to the College Board, the average student borrowed $26,900 to attend a public four-year institution in 2017. For private school students, that figure increased to $32,600.

Not every student thinks about applying for scholarships to help fund their education, as many think they wouldn’t qualify. But TFS Scholarships (TFS) Co-Founder Richard Sorensen said those prospective students may be surprised.

“When the average person visits our website, they may find 80 to 90 scholarships available to them. And, depending on their profile, they may get as many as 200,” he told us. “A lot of companies will give scholarships as a way to promote themselves, and those are not always widely applied for. They may be in the $1,000 to $3,000 range with no requirements. Those can be pretty easy to get.”

TFS helps connect prospective students with funding for their education.

The TFS database includes grants for those considering careers as dating and relationship coaches as well as those studying to become marriage and divorce counselors. Scholarships are available for everyone, from high school students to those who are planning to return to school later in life. TFS encourages parents to search the site for their graduating kids, too.

TFS connects future students with $41 billion in funding and more than 5,000 grant awards every month, and Richard said searching for scholarships is a smarter move than going to the financial aid department and borrowing money. That’s because institutions often offer those loans at inflated interest rates that add up substantially over the years.

“That’s the worst thing they can do. It’s so easy to apply for no credit check loans, but it’s so hard to pay it back,” Richard said. “But there is a ton of free money out there.”

Founded to Address Scholarship Needs More Than 30 Years Ago

TFS Scholarships dates back to 1987, when Richard and his friends were interested in technology and in starting a business. His father, who was the principal of a high school in Salt Lake City, suggested that they focus on helping kids find scholarships. At the time, many people thought that high school guidance counselors would find and suggest grants for post-secondary education. But they were often too busy, and parents didn’t know where to look, Richard’s father explained.

“It took us a year to put together a program, and back then, programming was completely different. Everything was on floppy disks,” Richard said. “It was initially a scholarship matching service. A person could develop a profile, and based on that profile, we would match scholarships for them.”

When the team began to market the product, they quickly connected with PepsiCo, the multinational food and beverage corporation. The company’s executives were interested in partnering with Richard’s platform as an exclusive national sponsor.

They used the software as a selling point when they were negotiating with high schools about getting vending machine licenses in the schools. Because schools were interested in the program, they would choose Pepsi products over Coke, he explained.

That partnership lasted from 1988 to 2012, when Wells Fargo took over as the official sponsor of TFS.

That business model made it possible for the site to have no commercial affiliations or advertising. When a user enters information, the platform does not sell it to a third-party company for marketing purposes. Everything is private and safe — which is a significant differentiator from other sites.

Life Details Can Help Applicants Stand Out and Get Offers

When Wells Fargo took over as the sponsor for TFS Scholarships, the platform opened up its services to everyone — not just high school students. That was welcome news for parents and people interested in pursuing an education later in life.

Users begin their journey by creating a profile that includes information on race, religion, personal interests, desired major, and preferred school. Once users complete a detailed profile, TFS searches its database to find scholarships to which they can apply.

TFS users can create a profile and start applying for grants quickly.

The platform lists the most relevant scholarship opportunities first, and then includes many grants that are available to all applicants. Some are even random drawings, where luck decides who gets the funding.

Richard recommends finding something that sets you apart when applying for the grants. That way, you have a better chance of making a lasting impression on the people and committees in charge of deciding who gets the money.

And don’t be shy, he added. When you’re filling out scholarship questions, share everything positive and interesting about yourself. Be bold — but don’t be negative.

TFS makes the process of applying for scholarships less confusing and overwhelming. The time and effort can be well worth it, as students can find thousands of dollars in grants and save even more in interest they won’t be paying after they graduate.

For those who feel like they don’t have time to search for scholarships, the company offers an easy way to keep up with trending offers. If students follow TFS on social media — Twitter, Facebook, or Instagram — they can see notifications about the scholarship of the day. Many of the 365 scholarships highlighted each year have no requirements to apply.

Richard told the story of one girl who started applying for scholarships through TFS when she was in the 9th grade. She would return home from school, do her homework, and then spend a few hours applying for grants. According to Richard, she ended up with more than $300,000 in grants by the time she graduated from high school.

“You don’t lose anything by applying, besides time,” he said.

Because of TFS’ strong partnership with Wells Fargo, the company can focus on expanding its database, rather than marketing. That commitment has resulted in TFS having one of the largest scholarship databases in the world.

TFS is still run by the same group of friends who founded it, as well as a team of part-time technicians who are also in college. Those technicians understand the need for grants better than anyone.

The ultimate goal of TFS is to ensure that people can afford to go to college, and the company will continue that mission unless the American political landscape shifts and the country offers free post-secondary education.

“Until that comes to fruition, we’ll keep doing what we’re doing,” Richard said.