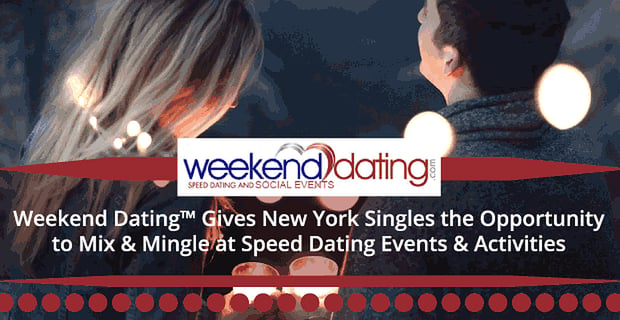 The Short Version: If you’re a New Yorker who’s tired of swiping through all five boroughs to find a good dating prospect, you may want to try Weekend Dating. For more than a decade, the company has hosted speed dating events and collaborated with local businesses to bring New York, Long Island, and even Connecticut singles fun and easy ways to meet. These events offer participants eight to 15 age-appropriate dates in just one night, and then Weekend Dating follows up to facilitate connections. People can also sign up for many interesting social activities — from salsa dancing to trivia — to meet others.

Personal experiences often inspire some of the best ideas. In the case of Jay Rosensweig, Owner and Founder of Weekend Dating, it was the lack of those experiences that sparked the idea for his business.

“I wanted to get out of the house on the weekend, but most of my friends were married or engaged, so I was looking for something to do,” he said. “I had gone to speed dating events and didn’t like the fact that none of them took place over the weekend — they were pretty much in the middle of the week. I got home really late and had to get up really early the next morning to go to work.”

That inconvenience got Jay thinking.

“I said, ‘Nobody is doing this on Long Island, and I am looking for something to do socially,’ and then I put the two together.” Weekend Dating was born.

The company is more than just a speed dating service because Jay understands that not everybody finds success dating on-demand. He collaborates with people and businesses in New York, Long Island, and Connecticut to hold low-stress events for people to learn new skills, share their passions with others, or just to hang out and have a good time.

Success is in the numbers for Weekend Dating — especially when it comes to lasting connections.

“So far, 62 couples have married, and 10 kids have been born — that I know of. One of the jokes I like to tell at the events is that I’ve been waiting 15 years for someone to name their baby ‘Jay.’ It hasn’t happened yet, but I’m hoping it’s going to happen soon,” he said.

Dating is not a one-size-fits-all endeavor. Weekend Dating understands that and has created a place for singles in the New York area to fill their social calendars, meet interesting people, and find partners with common interests.

Jay makes every effort to ensure that events are laid-back, casual, and foster conversation.

Weekend Dating also wants participants to have fun and connect with lots of people. He and his collaborators structure events so that you meet every attendee, which serves to remove any lingering awkwardness.

With a full calendar of speed dating events, social gatherings, and parties, Jay infuses fun and exhilaration into meeting other singles — while also making it cost-efficient. Meeting singles this way also gives your swiping thumb a rest for a bit.

Jay’s version of speed dating differs from that of other services out there. For one, he’s a stickler about age.

“We check IDs to make sure everyone is exactly who they say they are and aren’t misrepresenting themselves.” He said he feels a responsibility to give all participants the experience they signed up for, which means ensuring that everyone is being transparent.

Singles who sign up with Weekend Dating run the gamut. Women usually range between 24 and 65 years of age, while the men are just a touch older at 27 to 69. The events draw people from well outside the area, as well.

“People don’t come from the specific town where the event is taking place but usually within 30-40 minutes away. Some people have traveled farther,” Jay said.

As a general rule, the events are 90 minutes long, and attendees can expect to meet eight singles — but no more than 15. Limiting the time and the number of people can create a better experience, he said.

“When events are shorter than 90 minutes, people don’t feel like they are getting a good value. When they’re longer than that, people aren’t having as good of a time, and they start to burn out.”

During the events, singles will have eight to 15 mini speed dates, each lasting about five minutes. After each date, you circle ‘yes’ or ‘no’ on a scorecard indicating whether you’d be interested in talking with the person further. At the end of the evening, you turn in the scorecard to the organizer. The next day, you’ll receive an email with the names and contact information of the people with whom you mutually matched.

Attendees receive the names and email addresses of one-way matches — the people who chose you, but whom you didn’t pick — just in case you want to reconsider. Thus far, 70-80% of the participants leave the event with at least one mutual match.

“It can be overwhelming to meet a lot of people very fast, and you may change your mind. That’s why Weekend Dating gives you one-way matches. Other companies do not.”

If the idea of 10 mini-dates in 90 minutes doesn’t sound like your cup of tea, or you’re looking to be more social and meet other singles in a low-stress environment, Weekend Dating organizes social events for singles.

Meet up with others at events such as concerts, dance lessons, trivia nights, pool parties, and more without the pressure of being the best version of yourself in five minutes. These events are not about dating, but about making new friends and enjoying activities together.

Events are not limited by age and are a stress-free way to meet people who share common interests —but can also be a springboard to love.

If you love “Friends” or “The Office,” join up with the trivia groups to see if you can remember everyone Monica ever dated or how many times Ryan and Kelly broke up and made up. Events also include salsa classes, street art tours, and more interactive activities that can open up your heart and fill up your social calendar.

Weekend Dating works because Jay knows what it’s like to be single in the city — and he keeps things interesting.

“I’m living vicariously through people at these events. I’m still single, and I’ve met people myself. It hasn’t stuck for me, but at least I’m doing something great to get people together,” he said.

His Testimonials page is filled with thankful messages, engagement stories, wedding pictures, and more. Many of his clients have found someone special through his events.

One client named Samantha wrote to tell Jay how happy she is. “My now boyfriend and I attended an event for the first time in June 2015. We both had our eyes on each other before he got to my table, and, once he did, we clicked instantly. Since then, it’s been nothing but happiness,” she said in her testimonial. “We both are amazed by how well-suited for each other we are and how it seems we’ve known each other for far longer.” We’re happy to report a recent update celebrated the news of their marriage.

In the ever-changing dating scene, Jay plans to keep dating fresh for New Yorkers by continuing to do what works.

“I’m just going to keep diversifying,” he said. “Some people say speed dating is going away, but it’s not. People get sick of all the swiping stuff. I continue to come up with different types of events to connect more people.”