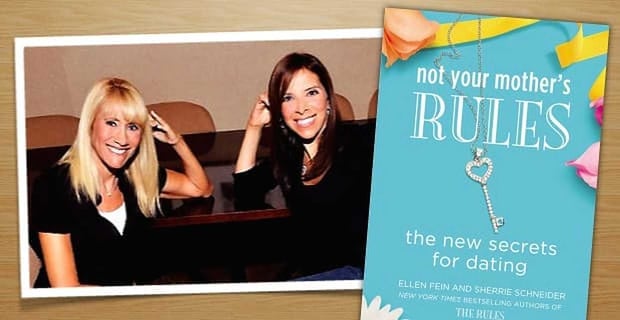 TL;DR: Dating today isn’t like it was in your mother’s time, and that’s why “Not Your Mother’s Rules: The New Secrets for Dating” is the ideal book for single millennial women everywhere. With Ellen Fein and Sherrie Schneider’s expert tips, you can easily navigate this technology-filled world and land the man of your dreams.

If you’re tired of being single and are always asking yourself “What am I doing wrong?” there’s no better book to help you answer that question than “Not Your Mother’s Rules: The New Secrets for Dating.”

As a follow-up to their 1995 best-seller and “dating bible,” “The Rules: Time-Tested Secrets for Capturing the Heart of Mr. Right,” Ellen Fein and Sherrie Schneider have compiled an updated list of rules just for millennial women so they can fully understand the detrimental dating mistakes they’re making.

What are the rules?

“Not Your Mother’s Rules” consists of 31 guidelines that show women how to stop treating their love lives like their work lives, with more of a focus on mystery and less on being aggressive.

Dating coaches Schneider and Fein said most women learn from their mothers how to study hard, get into a good college and start a successful career, but what they don’t learn is how to date, find the right guy and start a fulfilling relationship.

Some of the top rules include:

Schneider and Fein created these rules based on their own life experiences and the mistakes of their clients.

The co-authors want to show women they don’t need to treat landing a boyfriend like landing a position at a Fortune 500 company.

So what’s causing millennial women to break the rules? Technology.

“We wrote this book to address dating in the new millennium with all of the new technology because it was throwing women off – they weren’t sure how to handle it,” Schneider said. “They just don’t know how to do the dating thing. They know how to get a degree, but they really don’t know how to catch a guy.”

Fein added the rules are very easy to work into everyday life, making them something that will help women see results fast.

“When you’re doing the rules, it just comes naturally,” she said.

Why do the rules work?

The proof is in the pudding – Fein and Schneider are both happily married because they followed the rules in their own dating lives. Both women took it slow and made their now-husbands make all of the moves.

“They had to chase us, and that made them appreciate us,” Schneider said.

Sherrie Schneider (left) and Ellen Fein are the authors of “Not Your Mother’s Rules: The New Secrets for Dating.”

Their success in love also shows playing hard to get has not gone out of style.

“We don’t think of it as a game, even though we say play hard to get. We think of it as giving women power,” Schneider said. “We give them back their self-esteem [and] their boundaries because women are just generally, naturally very nurturing and open. We’ve had to help women set boundaries and control themselves because they tend to gush.”

What makes this book different?

“Not Your Mother’s Rules” isn’t for those who can’t handle the truth.

Unlike other dating books that sugar-coat everything, Fein and Schneider aren’t afraid to tell it like it is and call women out on their mistakes, especially when it comes to chasing after men and being too available.

Fein said while there are some critics of the book, most women need tough love like this in order to make the changes needed to improve their love lives.

“Too many women are open books. They treat dating like therapy,” Schneider added. “We’re creating intrigue and mystery.”