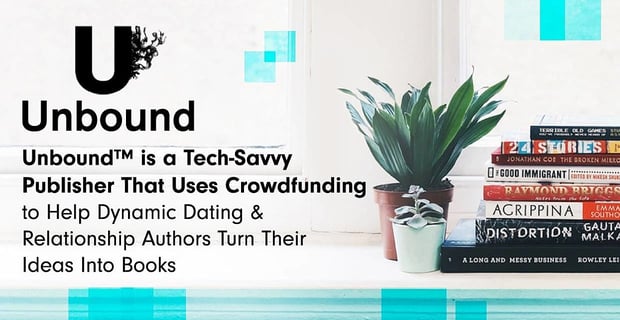 The Short Version: Unbound has harnessed the power of the internet to disrupt the traditional publishing industry and change the way an idea becomes a book. This groundbreaking publisher empowers readers to select which titles make it to publication. Ambitious authors crowdfund their book ideas and use their existing customer networks to drive interest in a project. Dating, relationship, and lifestyle experts with a potential self-help, romance, or advice book on the brain can pitch the project on Unbound and see if it sparks interest.

Building authority in the dating and relationship industry is all about spreading your message in as many ways as possible. You can share advice on social media, at in-person events, or through media appearances. You can create videos or email blasts for your subscribers. And, most importantly, you can add weight to your insights by binding them together in a published book.

Publishing a book allows you to showcase your expertise and build an audience on an international stage. However, making that transition from dating and relationship professional to bestselling author isn’t always easy. Dating and relationship experts are rarely publishing experts, after all, and they often need a helping hand to get their books on the shelves.

A tech-savvy publisher known as Unbound gives well-known professionals the opportunity to crowdfund their book ideas and leverage their loyal followings into book sales. This ingenious platform works off the crowdfunding business model. That means if you can raise enough money for your unpublished book, Unbound will publish it and deliver a copy to everyone who pledged money.

Readers direct the demand for books on Unbound, so your audience can tell you what they want — and then you can write it. This unique process gives creators the chance to float their ideas with an online audience and see if what gains traction and earns dollars. Maybe your 10-step process will intrigue readers. Maybe your unique perspective will strike a chord. You never know until you try.

You can rally support behind your brand and create a buzz around a book by joining Unbound as a creator and pitching your book idea to the professional editors.

Since 2010, Unbound has supported crowdfunded projects (aka books) across all genres, and the team is always on the lookout for the next big thing. Dating experts, matchmakers, and other noteworthy individuals can use this platform to unleash their creativity and turn a manuscript into a hardcopy.

“We’re excited about doing things differently,” said Phil Connor, Commissioning Editor for Unbound. “The publishing industry is over 500 years old, and it really hasn’t changed much. We want to do something to embrace technology and get people excited about books.”

Changing What It Means to Be a Modern Publisher

Unbound has published over 285 titles and built a network of over 198,000 readers and writers in 195 countries. This fast-growing online community has fulfilled a dream started by three writers in 2010. These forward-thinking men saw bookstores closing up shop and traditional publishing becoming increasingly difficult for new authors to crack — and they thought they could do better.

John Mitchinson, Justin Pollard, and Dan Kieran launched Unbound to put publishing power into the readers’ hands. They imagined a process that would work like the old-fashioned patronage system in which wealthy benefactors funded great works of art. Hey, if it worked for Shakespeare, who are we to argue? By combining crowdfunding with publishing, Unbound was born.

Today, Unbound’s library includes original works written by YouTubers, filmmakers, authors, poets, and a variety of experts around the world. Phil told us the professional editors at Unbound know how to “find the book in someone” and ensure a high-quality, thought-provoking project reaches its audience. The author has to do his or her part, too, of course, to ensure the book gets on the shelves.

“Our ideal author is someone who is tech-savvy, dynamic, energetic, engaged, and unafraid to be out there with big ideas,” Phil said. “The best projects have a strong issue at their core and are relevant to a modern audience.”

Having a timely subject matter or poignant perspective can bring people to your cause and generate interest in what you have to say. The most successful crowdfunding campaigns on Unbound typically involve an inspirational, controversial, or memorable idea.

For instance, “The Good Immigrant” is a collection of essays written by 15 immigrants living in Britain. The book ultimately reached 204% of its fundraising goal and received pledges from 1,383 backers, including J.K. Rowling. Now anyone can by the hardback or digital copy of the book and gain a personal look at how Britain’s immigration policies have impacted individuals and families.

“Using crowdfunding was integral to the success of ‘The Good Immigrant,'” wrote author Nikesh Shukla in a testimonial. “We were able to show that people do want to read books by British writers of colour, despite what the industry has told us for years.”

Many dating experts face a conundrum once they’ve grown as big as they can locally and want to expand to reach a larger audience. They are looking for that next step onto a national or international stage, but they don’t want to leave their local connections behind.

By crowdfunding a book project on Unbound, dating professionals can keep their current audience engaged while attracting new customers across the web.

Once Unbound approves a project, the team sets a fundraising goal that estimates the publishing cost of a particular project, and then it’s up to the platform’s readers to come together and raise the money within the next three months.

Individuals who pledge money to an Unbound project will receive a copy of the book once it’s printed, and they can also get exciting perks such as having their names printed on the back of a book or having lunch with the author.

Should the project fail to meet its fundraising goal, Unbound refunds the pledge money. According to Unbound’s internal statistics, over two-thirds of projects meet their fundraising goals.

“One of the joys of crowdfunding publishing is that people have the chance to go behind-the-scenes and get to know the author on a more personal level,” Phil said. “Now readers have agency in what’s being published.”

Unbound offers value to the creator as a grassroots publisher, and its potential to build communities around books can appeal to professionals looking to expand their reach. The platform can stimulate interest in a work and give enthusiastic supporters a chance to contribute to the project. In the end, authors don’t need thousands of followers to generate enough money to create a book — a handful of hardcore fans will do.

The Unbound publication process works best for professionals who have clients, listeners, readers, or other networks they can activate for a crowdfunding project. Authors need supporters to give money to help a book idea cross the finish line and get published. That collaborative effort often makes individual readers feel as if they have a personal stake in the future of a book. After all, their name will be on it.

“We turn ideas into books and bring people together,” Phil said. “The purpose of our company is to galvanize people around something they think is important.”

Over the last eight years, the Unbound team has lived up to its mandate of “liberating ideas.” The company is on a mission to make publishing less intimidating for newcomers with big ideas and strong professional or personal networks.

Many employees at Unbound are experienced writers or editors in their own right, so this is a personal cause for them. Those who have worked in the publishing industry have seen its flaws firsthand, and their frustration with the system brought them to Unbound. Collectively, the Unbound team has over 300 years of publishing expertise to back its process.

Phil Connor, of Unbound, has a talent for pairing the right book with the right audience.

Phil is a former bookseller who joined Unbound around five years ago when the startup company had only 10 employees — now it has over 50. He came on board because he felt traditional publishers fostered a disconnect between readers and authors, and he hoped Unbound could use technology to bridge that gap.

“There was a lot of pessimism in publishing then,” Phil noted, “but I thought those fears were misplaced. Technology offered the publishing industry a huge opportunity.”

Unbound fosters a versatile work environment where employees have a chance to pursue their passion projects and make an impact by discovering and recruiting talented authors. Full of curiosity and exuberance, employees go the extra mile to edit, support, and publish great works of fiction and nonfiction.

“The people are my favorite part of working at Unbound,” Phil said. “It’s a collegiate atmosphere. Everyone has a lot of interests in and out of work, and it’s fun to see what we come up with together.”

When it comes to building authority, dating professionals have a lot of tools in their tool belt, and the challenge becomes deciding which method is right for their long-term career goals. Publishing a self-help book can go a long way toward creating a lasting legacy that’ll live on physical and virtual shelves long after a tweet or advice article has faded from the web.

Unbound can help potential authors skip the traditional publishing hurdles and create bestselling books that meet popular demand. If you have something important to say to daters, create a project on the site, make your case, and see if people buy it. Unbound’s low-risk and high-reward system favors both the authors and readers, allowing them to build a community around the topics they love.

“We’re all about liberating ideas. That’s our motto,” said Phil. “We help people use their networks to turn their ideas into books.”