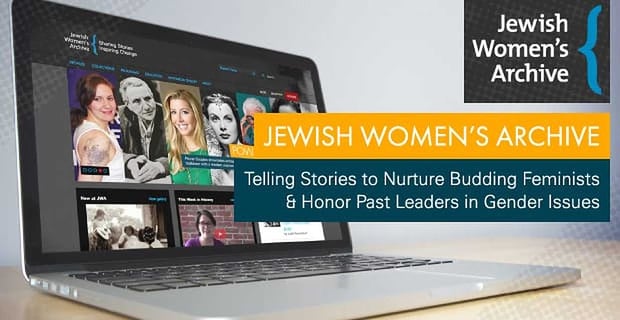 The Short Version: Between online dating and the mainstreaming of feminism, dating has changed radically over the past few decades. In modern American society, commonly accepted practices of the past, like men paying for dinner, have become more fluid, leaving singles wondering how to adapt to a more egalitarian mode of dating. Collecting thousands of stories across history, the Jewish Women’s Archive (JWA) focuses on Jewish feminist leaders, both past and present, who inspire introspection and leadership in feminists worldwide. Since its founding in 1996, the digital archive and nonprofit’s online exhibits, resources, and programs have cultivated an active community of movers and shakers. At the Jewish Women’s Archive, people of all ages and genders come together to share their experiences, strengthen their identities, and find common ground.

When I signed up for Jewish American Fiction in college, my friends suspected I was just trolling for a date. I like to categorize my type as straight-up nerds, but a couple of my boyfriends were also, coincidentally, Jewish, so there’s a theory floating around that I’m a sucker for Jewish boys. In reality, I took Jewish lit to learn, not find romance.

One book assigned in the class, A Weave of Women by Esther M. Broner, struck me as an empowering pushback against patriarchy; I felt shy about coming out as a feminist in class, so I kept my hand down during the discussion. A boy on my left, however, did not hesitate to speak up. “I don’t think it’s so controversial,” he said. “I mean, we’re all feminists, right? Who doesn’t believe in equality?”

OK, so maybe my friends had a point. It only took a few sentences for me to get a crush on my classmate. Affection is built on those moments when someone says your thoughts before you do. If you feel like you’re a minority in mainstream society, having someone who has traditionally been representative of your side is a powerful thing. There are few places where gender and classroom dynamics, Jewish literature, and feminism can be interwoven. The Jewish Women’s Archive (JWA) is an organization whose work and digital community provides space for all of those conversations.

Founded in 1996, JWA is a digital archive of the largest collection of Jewish women’s stories in the world. Building on academic roots, JWA endeavors to make history accessible and fun through the podcast Can We Talk and the Jewesses With Attitude blog. Both of these online resources give modern-day feminists a place to share and grow through storytelling.

JWA promotes role models, power couples, and women of valor to inspire their audience to action.

Aiming to effect change by empowering future feminist leaders through the examples of the women who came before them, the site celebrates Jewish women who have made an impact in the centuries-long struggle for equality and inclusion. Recently, the organization has expanded its reach by sponsoring on-the-ground discussions, public programs, and a thought-leadership fellowship aimed at Jewish teenage feminists.

“We are a purely digital archive devoted to the voices of Jewish women,” said Rachel King, Director of Marketing and Communications for JWA. “We learn from our foremothers and the amazing kickass women who came before us to make change today.”

The Jewish Women’s Archive aims to inspire an intellectual awakening in feminists worldwide. The website’s community stories and podcasts both emphasize historical leaders as a way of empowering the members in their community to continue fighting for social change.

Taken as a whole, the Jewish Women’s Archive gives readers a vocabulary and context to talk about gender and identity in a meaningful way. A lively community-driven part of JWA’s website is the “Jewesses With Attitude” blog, which fosters a relaxed, informal space for Jewish feminists to gather and converse. If you want a place to mull over interpersonal relationships and contemporary feminist issues, you can sift through the personal stories from impassioned writers on JWA.

One anonymous author connects her experience with the #YesAllWomen movement. Another feminist leader Larisa Klebe strongly pushes back against reductive and antiquated stereotypes of feminists as man-haters. To the suggestion that the so-called “battle of the sexes” kills romance, she points to her own happy marriage: “It’s perfectly possible,” she writes, “for a feminist to be in a healthy relationship with a man while still believing that he benefits from male privilege.”

This thought-provoking blog tackles everything from reproductive rights to the pitfalls of online dating, and it neither simplifies nor generalizes the conflicts women face.

“JWA is part of rewriting history from the perspective of people who are actually living it every day.” — Kate F., researcher and reader of the Jewish Women’s Archive

Sometimes serious, sometimes amusing, the online blog covers a range of hot-button topics — even Jewish hair. In this vast archive of the stories and experiences of Jewish and feminist leaders, “What is Jewish Hair?” is the JWA’s most popular blog post by far. Published in 2007, the article still garners a large amount of attention on the blog.

“It obviously resonates,” Bella Book, JWA’s Executive Assistant and Office Manager, said with a laugh. “Our blog is often lighthearted and whimsical, which is great. It has humor but also has an awareness that everything we talk about has a historical background and has resonance for today’s women.”

JWA is the world’s largest archive of Jewish women. Each year, over 1 million visitors come to the site, and many find a sense of belonging and identity in the words and stories of Jewish women such as Emma Goldman, Bella Abzug, Gloria Steinem, and Ruth Bader Ginsburg. Going beyond their content, the Jewish Women’s Archive gives people the chance to get involved and find support in a friendly atmosphere.

You can check out the JWA events calendar to learn about upcoming chances to join the discussion and meet people who share your ideals at public programs.

Additionally, JWA’s online book club fosters conversation among readers on the site. For bookworms like me, talking about what you’re reading is a fast way to bond and build friendships. The book club is open to people of all genders and backgrounds. You can go online to answer discussion questions, read author interviews, and get a curated list of Jewish feminist titles.

Teenage Jewish feminists can become part of the Rising Voices Fellowship, a 10-month thought-leadership program dedicated to empowering young women to develop their opinions and their voices by writing for JWA’s blog. These well-spoken high schoolers share their experiences, reflect on social justice, and come away with invaluable writing and leadership skills. It’s a great opportunity to build confidence and leadership skills in a supportive group setting.

“Because of the Rising Voices Fellowship, I now know that what I say, write, and believe is significant,” Ellie Kahn, a JWA RVF Fellow. “If this is what power feels like, then I can understand why everyone wants it.”

Encouraging activism and engagement, the Jewish Women’s Archive promotes their progressive agenda through public programs, fellowships, and volunteerism. “We’ve definitely evolved over the past couple decades,” Rachel said, “to become a more interactive and engaging forum for people of all walks of life.”

The Jewish Women’s Archive fosters a diverse, collaborative, and welcoming company culture. They even let dogs come and spend the day lounging in the office.

The clear-eyed leadership of Judith Rosenbaum, JWA’s Executive Director, is a big part of the positive and jocular atmosphere among the Jewish Women’s Archive’s staff.

“She sets the tone,” Rachel said. “She has serious intellectual chops as a feminist scholar, and she’s a really fabulous female leader, so we’re all fortunate to work in a place focused on women and powered by women.”

Reflective and inspirational, Judith has her Ph.D. in American Studies from Brown and speaks with conviction about empowerment and leadership. To that end, she encourages women to share their experiences. “Stories will heal us,” she writes in one blog post, “individually and as a nation. So today, and in the coming days, reach out to someone and share a story or engage in conversation.”

The Jewish Women’s Archive recognizes trailblazers of the past while advocating for equality in the present. The archive’s stories run the gamut from honoring American suffragettes to breaking the glass ceiling. “We love featuring women’s intergenerational impact and recognizing the shoulders we stand on,” Rachel noted.

The JWA’s community of educators help shape the future of women around the world.

Through education and activism, the Jewish Women’s Archive has built a truly unique digital space. Its extensive collection of stories promotes an understanding of history to inform the conflicts and issues of the present.

Beyond its remarkable content, the nonprofit offers a myriad of chances to get involved by commenting online, attending local programs, or volunteering with JWA. By joining the conversation, you may find you have more allies than you thought, and that’s always a heartwarming feeling.

When my classmate spoke up about feminism, the class practically gave him a standing ovation. By voicing his support, he encouraged others to don the label “feminist” without stigma. I wasn’t the only one to linger after class to talk to him (read: flirt with him) because, let’s face it, feminist guys are hot.