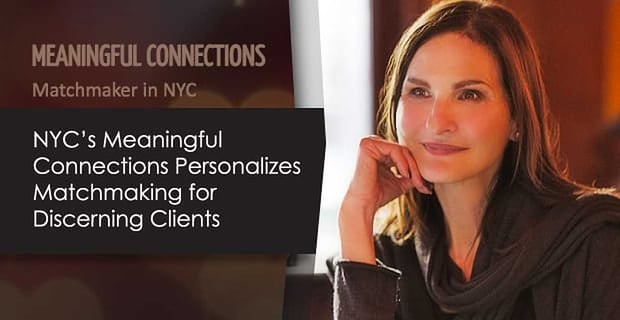 Short Version: Fay Goldman has more than 20 years of matchmaking experience in New York City, which can be one of the country’s most challenging locations for daters. Her service, Meaningful Connections, creates personalized pairings so clients don’t have to waste time on people who aren’t compatible with them. Fay uses early client sessions to determine what they’re looking for in a mate and then sets up meetings with well-suited matches. She also offers coaching in effective dating techniques to ensure that clients put their best foot forward. Ultimately, Meaningful Connections has helped numerous New Yorkers build friendships, healthy dating lives, and, even strong marriages.

Not all of Fay Goldman’s clients think they’re going to have success through matchmaking — at least not at the start.

“A divorced woman came in as an exercise, but she wasn’t expecting much. She thought she’d just go on a couple of dates, but she ended up falling in love,” Fay said. “Now they’re living together and plan to get married. She was in disbelief at first, but she recently sent me some emails saying she was really in love and thanked me.”

That client’s happy ending is not uncommon in Fay’s 20-year career as a matchmaker in New York City. She founded her matchmaking business, Meaningful Connections, to help New Yorkers find love and happiness.

“I like to make sure the client is getting a personal experience and someone cares about what they’re looking for,” she said.

Prospective clients may wonder why they would turn to a matchmaker when dating opportunities seem so plentiful, but many of Fay’s current clients invest time in their careers, their health, and their own success, but often neglect their romantic lives.

Many of Fay’s clients have told her using one-size-fits-all dating apps have left them feeling disconnected. At the same time, these dating apps have changed user perceptions about meeting their soul mates in person. Instead, online dating has made people more receptive to meeting a partner in non-traditional ways, including a matchmaking service like Fay’s.

“There’s a huge spinoff lately of people using apps and finding that they want something more personalized,” she said. “They get accustomed to using different methods — other than organically meeting someone. So there’s a lot of people who turn to matchmaking who would not normally have reached out.”

Her clients are diverse in age, experience, and interests. Some are younger people in their 20s and 30s who want to start families, while others are older divorcees or widows who wish to embark on new romantic adventures.

Daters of all ages come to Meaningful Connections to meet compatible partners.

“People go through different life stages, and I deal with all age ranges,” Fay said. “It starts in the mid-20s and goes all the way up. I work with anyone who is realistic and looking for a relationship.”

The clients who seek out Meaningful Connections all have one thing in common, though. They don’t want to play games and are serious about finding love.

“Everyone seems to have goals at certain points and age ranges about what they’d like to do. I think you can find love at any age,” Fay said.

Dating Plans That Differ Based on Life Stage and Interests

Meaningful Connections doesn’t have a standard plan for each client; instead, Fay creates individualized service packages based on his or her needs.

“I’ve had my business over 20 years, and I modeled it on the idea that I would provide personalized one-on-one instruction,” she said. “So the client has an experience as if they’re working with a friend who helps them find a person who is the right fit for them.”

Clients begin the process by filling out a brief informational form online, and then they speak with Fay about their preferences in a partner — like their emotional baseline, intellectual curiosity, and physical appearance.

“There’s a lot of communication after I start working with them. I provide feedback, and the client has a lot of say in who they’re introduced to. Then there’s a lot of feedback after they do meet to see if they’re on the right track,” Fay said.

Fay gets to know clients on a personal level before matching them.

Next, Fay compiles a list of suitable matches. Some clients she sends out on a handful of dates, while others may find an ideal partner after just one or two outings.

“It depends on who I’m working with, what I think will work for them, how many people I think is realistic,” she said.

Some clients may believe their dating style needs a few tweaks, which is why Fay also provides coaching services.

“They may be doing something that’s not working for them on a date, and they’re just not aware of how they’re coming off,” she said.

Her coaching style is compassionate and client-driven. She never provides advice that a client doesn’t want — or hasn’t asked for.

“I base my coaching on experience working with other people and common sense,” Fay said. “I’m figuring out how each client is receptive to advice. I don’t push anything onto someone. I’m not about that. I like to nudge them in the right direction gently.”

Fay’s matchmaking and coaching style work, and her list of satisfied clients prove how effective she is.

“One of my clients was on her second or third introduction and met her soul mate,” she said. “The man was someone I had met years earlier, but after I met with her, he popped to mind. I thought they would be perfect together — and they were. They got married, and they’re very happy. They have the same interests, the same sensibility.”

“It’s the greatest feeling. It makes you feel like you’re doing something worthwhile, and you’ve changed someone’s life,” she said. “Some of my clients and I become close, and it’s wonderful when you help someone find what they really want.”

Two decades later, Fay intends to continue what she’s done since she opened Meaningful Connections: create a personalized matchmaking experience that considers each client’s needs and desires. There will never be a one-size-fits-all model here.

“I want to keep Meaningful Connections personalized,” she said. “I want it to be the opposite of the online app. I’m all about keeping it real, and I think that’s what people are looking for.”