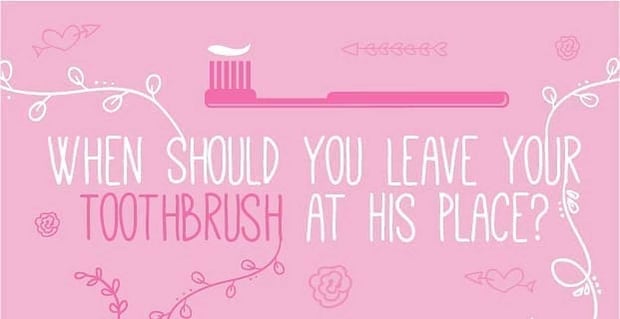 Dating is a game of give and take. At first look, women often seem to be the “givers” and men the “takers.” But, upon closer examination, the truth is revealed. Women are the masterminds in the windowless white van offering candy to their weak and gullible prey.

In the short term, of course, men often turn the tables and steal the candy before the woman gets what she really wants — a relationship. But the long-term game is driven by the female mind, which is the engine that has transformed our world from a jungle ruled by might and brute force into a civilized, functional and sustainable society.

The best way for a woman to gradually stake her claim on a man’s life while she is winning his heart is to leave little reminders of her around his home.

In fact, it is not only OK for you to leave things there, but it is required if you want to keep the Earth from spinning out of its orbit.

When should you begin to leave things?

When the time is right, you might have a nice date on Saturday evening and spend the night at his place. Cool. But the Sunday morning walk of shame can be an awkward experience.

You leave his place in your strapless red dress and heels while all the people heading to church or brunch are gawking at you like you’re the whore of Babylon. It’s not something you want to repeat often, but you can’t just claim the bottom drawer in his dresser yet either.

For now, just remember next time to roll up some leggings in your purse that can pass for pants and borrow one of his T-shirts that will come close to your knees.

What should you leave, and on what timetable?

After the first sleepover, you can’t leave anything. Some guys lose interest after one time, so you want to make sure it’s going to happen again before you start making assumptions.

The second time you stay over, you have to make sure you claim one of his T-shirts as your own (and not the one you might wear home). Guys love it when you wear their clothes, especially when you’re still all naked under that tee.

Put it on at night or in the morning for coffee and toast. But before you leave, make sure you tell him this is yours now and put it in a drawer or on a closet shelf that isn’t its normal place. Move some of his stuff out of the way and claim half of a drawer or one closet cubby so it has a place of its own.

It’s not presumptuous because the only thing in “your” spot is “his” shirt. You deserve a small place in his room, which in a way symbolizes your place in his heart and his life. Like love, it starts small and grows.

you can break through his firewall.”

If you’ve stayed at his place three weekends in a row, that’s a routine. His place is now your home away from home one night a week. Even if you alternate between his place and yours, the third time is still the charm.

He won’t mind if you use his toothbrush the first time. After all, you’ve been swapping saliva anyway. But there’s a good chance his toothbrush might look like it has been through two wars and a blender.

Pick up a new toothbrush and have it ready in your purse. Make it a nice big pink one that cannot be mistaken for a man’s toothbrush. This will make him think twice before he brings another girl home, or it will let her know he’s already taken.

Then just tell him “by the way” that you left it there so you don’t have to remember to bring one all the time. Pay attention to his response so you know how he feels about it.

Between the getting-to-know-you dates and a few intimate soirees, you’ve been together for weeks or months by now, so he will probably be a little excited about having something of yours to see every night and morning.

If he’s not, then it’s a good thing for you to find out now.

Each week you should leave one more thing. Bring a small framed picture of the two of you having fun on a roller coaster or at a party, club or camping out. Put it on the nightstand next to his bed or on his dresser.

It will remind him that you are a joyful part of his life, which will help you work your way into his heart as you weave your life stories together.

Socks aren’t too personal, so if you had a casual date and wore regular cotton blend socks, put them in his hamper and borrow a pair of his athletic socks. Just ask him to wash them with his things and put them with your T-shirt.

If that goes unchallenged, then go home “commando” next time and leave your undies for him to wash and add to your spot. He might actually like that.

After a month, bring your own plush “girly” bath towel to hang next to his. Bring fuzzy slippers and a robe and hang it in his closet the next week.

Your own soap, shampoo and conditioner also can be on the list during the second and third months. Comfortable jeans, tops and old sneakers might come next and also give you more options for going out for breakfast or lunch the next day.

You can’t load his bed with large stuffed animals, but you could get him a very small one as a gift and as a reminder of you that he can place where he likes.

Feminine products can be a touchy issue. Never leave the whole box, but after three months of regular sleepovers, you might want to leave a few tampons partially tucked under your T-shirt.

It also signals him that he is a trusted part of your inner circle and your private life and gently prepares him for the realities of female companionship.

Within three to six months, depending on his acceptance level, you should have a whole drawer and a presence in his closet, nightstand, bathroom vanity, towel rack and shower. The kitchen and living room are fair game next.

Why is it a good idea to leave your things there?

Men fall in love and accept commitment very differently than women. They are eager to jump into your white van for the candy, but real life, love and commitment have to sneak up on them from behind. You run toward commitment, but he runs away.

That’s why this gradual process is the most humane way to allow a man’s love and comfort level with a committed companion to grow and thrive naturally. It’s kind of like using a “live trap” for squirrels instead of a typical “sudden death” trap for mice.

Your man gets to test the waters one step at a time, and you get to plan your strategy by watching the way he responds. If he seems uncomfortable with one of your steps, you can back off, slow down or have a conversation about where things are going.

The truth is that you will, in the long run, be taking over his life — at least many aspects of it — and that is how nature intended it.

But it can’t feel to him like he is losing control. You have to take it at the rate he gives it to you. You are in charge and make the rules physically, but he sets the pace emotionally.

The stronger party is never allowed to force his or her will on the weaker, and you are stronger emotionally. When it comes to his freedom and independence, he is the giver and you are the taker.

By making small compromises along the way, you can break through his firewall, and you will both be better prepared for the bigger compromises and accommodations you will need to make when you are living together full-time, perhaps as husband and wife.