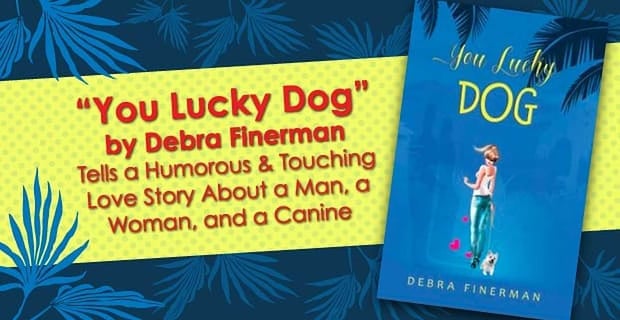 “You Lucky Dog” by Debra Finerman Tells a Humorous & Touching Love Story About a Man, a Woman, and a Canine

The Short Version: Have you ever found yourself having conversations with your dog when you’re alone? Ever cuddled with your closest furry friend and wished a human could be so loving and understanding? If so, then you’ll relate to Debra Finerman’s latest novel “You Lucky Dog.” This romantic story follows a man named Jake, who, after a freak accident, occupies the body of his wife’s pet dog, who’s also named Jake. He’s lucky to be alive, but he has to learn to see life in a new way — through a dog’s eyes. “You Lucky Dog” highlights the transformational power of a dog’s unconditional love. It’s an uplifting and laugh-out-loud story about a couple whose love is stronger than death.

American author Debra Finerman said the inspiration for her latest book, “You Lucky Dog,” came from a conversation with a friend. They were talking about how much they adored their fur babies, and her friend compared her relationship with her dog to the relationship she’d like to have with a man one day.

Published in June 2018, “You Lucky Dog” offers an amusing look at the life of a pet dog.

“My dog loves me unconditionally,” she said. “He’s always there for me. If I could only find a man who loves me like my dog does, I’d be happy!”

Who wouldn’t want a romantic partner as loyal, enthusiastic, and silly as a dog? The question got Debra thinking about the nature of unconditional love and what lessons humans could learn from their good-natured companions. She wrote “You Lucky Dog” to express how important it is to love without reservation.

Her friend’s lighthearted comment inspired her to write a fun and imaginative novel full of heart. “It got me thinking, ‘Aren’t we all seeking unconditional, true love?'” Debra said. “The biggest takeaway from ‘You Lucky Dog’ is that true love never dies.”

“You Lucky Dog” is available now as an ebook and hard copy. If you’re looking for a humorous romance novel to read on the beach, this would be a great choice.

What Happens When a Husband Turns Into a Dog?

Although it starts with a funeral in Los Angeles, “You Lucky Dog” is actually a humorous novel. The premise is that a man dies in a car crash, but his heart, soul, and mind transfer into his wife’s dog Jake. He continues living with his wife, Emma, but their relationship has changed somewhat. They have to find a way to make things work and love each other, fleas and all, just as much as they did before.

According to the book’s description, “What follows is a hilarious and heartwarming tale of misplaced identity. ‘You Lucky Dog’ explores the mysteries of life and death, and the enduring power of love, in a heartwarming story for animal lovers and all lovers.”

With an unfailing sense of humor, Jake narrates his experience living as a dog and seeing life from a whole new perspective. This unexpectedly touching story will have readers laughing the whole way through — and maybe tearing up just a little.

Debra’s Backstory: How a Journalist Became an Author

Debra started her career as a journalist in Los Angeles. She worked for a Beverly Hills newspaper and The Hollywood Reporter’s monthly magazine, but she longed for a change. So she enrolled in Christie’s Art Connoisseur program in New York City. She packed her bags and started a new chapter in her life.

In 2007, Random House published Debra’s first book, “Mademoiselle Victorine.” This historical novel takes readers on a romantic journey through 19th century Paris as seen through the eyes of the city’s most sought-after courtesan. The book has been translated into six languages.

Author Eleanor Herman called the book “as vivid, bold, and seductive as a Manet painting.” The story is a love letter to the city of Paris where Debra now resides.

In the last decade, Debra has published three novels and written articles about France in the online magazine “My French Life.” Her latest book is written for dog owners and dog lovers who, like her, believe in the inherent goodness in man’s best friend. The American writer has owned several dogs in her lifetime and said she never fails to fall for their quirky personalities. She based the dog in “You Lucky Dog” on her first dog, Frosty, whom she described as “a witty, frisky West Highland White Terrier.”

Animal Lovers Give the Book Two Paws Up

The majority of Debra’s readers are women, but she said she has also heard from men who read and enjoyed her books. The sentimental and humorous tone of her works resonate with people from all walks of life, but she said she wrote her latest book with a particular reader in mind. “‘You Lucky Dog’ is particularly for an audience who loves their pet,” she said, “and secretly believes he or she is human.”

Her books have been well-received by many readers over the years. “Mademoiselle Victorine” has a four-star rating on Amazon, and “Shadow War” (a WWII historical novel) has a 4.4 star rating.

“Reading the book is engrossing as well as informative. I thoroughly enjoyed it!” — S. Brown in a review of “Mademoiselle Victorine”

“I looked forward to reading this book. I wasn’t disappointed,” wrote Myra Gabbay in a review of “Shadow War.” She said she appreciated the well-rounded characters and inspirational message in the novel. “I do highly recommend this book to fans of historical fiction,” she said. “It is easy to read and very thought-provoking.”

“This is a very well-written novel, entertaining throughout,” said Thomas S. Ahrens on Amazon. “Very exciting, well-developed characters. I thought the action was nicely paced, making for a fun read.”

Debra’s goal when she writes is to entertain readers and give them something to think about, so she said she loves to hear from people who took her books to heart. “To hear feedback that people liked my book gives me great pleasure, of course,” she told us. “Everyone’s an individual and has a right to their opinion. But the positive comments happily far outweigh the negative.”

“You Lucky Dog” Will Make Its Debut in June

Anyone sniffing around for a quick, fun, and romantic story can dig into “You Lucky Dog” to enjoy a terrific tale of love, life, and dogs. The romantic novel follows Jake on his journey from cynical husband to faithful companion — and it has a twist ending you won’t see coming. From start to finish, Debra’s book offers a fun and refreshing take on romance that’ll have readers rolling over with laughter.

Whether you’re a dog owner or an animal lover, you’ll find something to relate to in this incredibly human story about a couple’s dogged determination to stay together.

Inspired by her own love of dogs, Debra has crafted a creative and down-to-earth tale that’s easy to enjoy. Debra told us she already has an idea for her next book, which is still in the planning stages. In the meantime, Debra’s fans can get themselves a copy of “You Lucky Dog,” which will be on shelves in early June.