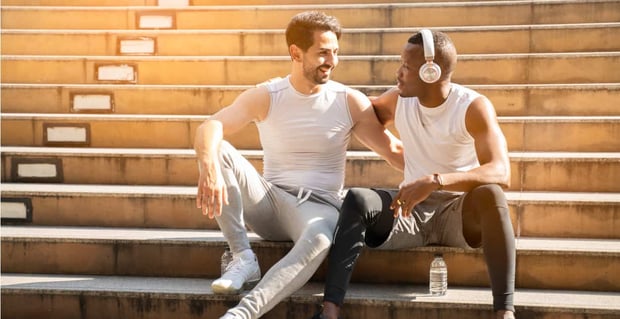 Gay dating culture can be complex. As much as I would like to think that dating should be simple, it isn’t. My hope is that, as people become less enchanted with technology, the trajectory of dating a gay man will be a lot more direct. It will be less about veering into ghosting or misleading territory.

When I asked a couple of close friends about this topic, I got replies that seemed fairly comical. Among my favorite replies was a GIF of a person swinging on a trapeze of sorts and another GIF of the stock market. I look at both of these representations, and it’s apparent that gay dating culture feels like an unpredictable game. Let’s delve a little deeper into this mental game of hopscotch.

Texting is a Game of Hide-and-Seek

The current tech era we live in has created a culture of constant texting — and sometimes a lack thereof. Who texts whom first? Can you catch a single man at the right place at the right time? I’ve always been quite the immediate texter. But I do not expect my partner to adopt that same mentality.

Sometimes it may seem like feast or famine with texting.

My one problem is when you know a guy has texted you, and you have ignored it throughout the day. It takes less than one minute to say, “Hey! I’m busy right now. Can we chat later?”

Are you wasting time trying to find someone who doesn’t want to be found? This, to me, is one of the biggest obstacles in current gay dating culture.

You Have to Be Willing to Be Vulnerable, But Be Brave Enough to Walk Away If It’s Not a True Match

Are you ready to experience love and make the choice to be prepared to fail? This is something I recommend for anyone who has experienced a recent breakup.

If neither partner in a couple is paying attention to cultivating a relationship, you can’t really claim to have anything in common. This becomes a game between a potential couple — neither of whom is really trying to find middle ground. And the fact is there isn’t one to be had.

Last year, I dated someone who didn’t have the same values. My non-negotiables weren’t something my potential partner wished to change about himself. You want to take everyone at face value and try not to convince them to be like you. Your perfect match will be open to change, but a relationship doesn’t work if you are demanding he change his character.

I can remember times when a current friend or dating coaching client was giddy over a recent spontaneous hookup interaction. A lot of gay men can get caught up in the fun and games and don’t establish an appropriate dating or relationship foundation.

Try not to get so wrapped up in the physical interaction that you forget to pay attention to what he says about how he feels about you.

Always remain cautious and approach getting to know someone with trepidation — especially with those people who don’t text you back after a fun evening. They do not want a relationship. They simply bought their ticket, had their short-term fun, and now they are ready to find their next ride. This is also one of the top frustrations I see in gay dating culture of today.

Many Gay Men are Selling the Idea of a Lifestyle, Not a Reality

I remember personally being newly gay and being treated like a “hot, young thang” among some older men. They loved to shower me in glitz, glam, and red carpets, but never actually wanted one-on-one time with me. I almost felt as if I was just another notch on their belt, another person in their plus-one Rolodex.

Gay dating culture can have that prestigious ambiance to it. A majority of attractive and seemingly successful gay men on social media want to sell you the magic of their lifestyle. Are you dating someone who wants to show you the alluring promise of a relationship? Don’t fall for this guy because every magician needs himself a willing volunteer.

Beware of Gay Men Who Only Talk About Themselves

A lot of newly gay men experience the vapid and judgmental culture of dating someone who is consistently rude to them as well as other people (i.e. restaurant staff, grocery store workers, or Uber drivers). As a professional matchmaker, one thing I consistently hear from clients is that they want to be with someone who is kind to service people.

Men who only want to tear you or others down and not build people up should be a huge red flag. Going on dates where the other person barely asks you any questions isn’t enjoyable at all. You feel like you’re being put in a game of dodgeball where you and others keep getting berated, and your date hasn’t bothered to ask anyone else’s opinion on anything.

A common gay dating red flag is if someone is self-centered and rude to others.

Men ready for a relationship always want to feel heard, so it’s best to practice a balance of active listening and sharing. They won’t mind being actively in the game or out on the sidelines.

In my book, I wrote about the notion of “The Keeper.” I the used the gay dating stories I had heard over the years from my clients and friends to classify gay men into certain archetypes based on their dating behaviors.

The tango takes a lot of dedication, focus, and paying attention to the cues of your dancing partner. The testimonies I’ve received from clients and friends in successful relationships have something in common. A “Keeper” is someone ready for love. “I have known him for longer (within a short time)” or “We met, and things just fell into place naturally” are the words of people who met the right partner.

You’ll know you have found The Keeper when the person you’re with isn’t about making excuses, but offering tangible solutions when confronted with obstacles. If things go bad for whatever reason, a good partner should strive to work through problems with humility and understanding. They know about the bad parts of dating culture, and they strive to not be a disappointment. They are ready to take your hand and dance!

It Can Be a Challenge, So You Want to Bring Your A-Game

Everyone yearns for that perfect score with someone they’re interested in. There are so many relationship factors that need to be present for everything to work.

Trust me, parts of gay dating culture are quite difficult to navigate. You have to be clear on your online dating profiles and on your first dates that you are looking for a genuine man who shares your interests and wants a serious relationship. Establish early on how you feel — you deserve to be honest with yourself, and your potential matches deserve honesty, too.

The thing about competitive sports is that they can take a lot of time and patience to build a professional skill set. When I was matching heterosexuals at the beginning of my career, a lot of clients would mention their preference to date divorced individuals. I totally knew the reason why. You can only gain something if you put in the work and try your best.

Be a champion among all of the suitors playing the gay dating game. Your victory will come only if you go against the grain of a culture that can be against you. I recommend you take a gamble, maybe defy your odds, but most importantly, stay true to your worth and sense of self.

How to Be Proactive in Dating (LGBT Advice)

Why is Gay Dating So Difficult?