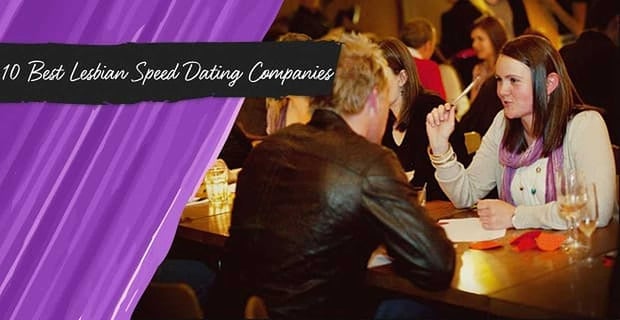 Speed dating was created in 1998 in Los Angeles by Rabbi Yaacov Deyo. While it died down a little as online dating took over, speed dating is still a favorite dating option among many singles. Particularly because you can try to make a connection in person instead of behind a screen — and you can get down to the nitty-gritty of what you really want in a date or partner.

However, choosing the right speed dating company can be kind of tricky, especially for lesbians. They don’t all cater to this audience. We thought we’d make the search easier for you by compiling a list of the top speed dating companies that offer lesbian events. From San Francisco to London, you’ve got a lot of choices.

You’ll need to reserve a seat for a Single Mingle, which usually last for three hours Once there, you’ll meet up to 20 like-minded women in one-on-one five- to seven-minute rounds. You’ll provide feedback after each mini date. If you and another woman like each other, you’ll both receive contact information the next day.

Known as “the world’s largest speed dating service for single professionals,” Pre-Dating hosts monthly events in more than 70 cities around the US and Canada. So far, the company has facilitated more than 5.7 million speed dates.

The process is simple. Just look for your city, register for an event, and read the informational email you’ll receive. Then, arrive early to get your name tag and scorecard. You’ll have six to 12 six-minute pre-dates, after which you’ll specify who you’d like to see again on your scorecard. Finally, you’ll receive your results with contact information within 24 hours.

3. Professionals in the City

Whether you’re looking for friends, dates, or a relationship, Professionals in the City can help you find it.

Professionals in the City is one of the largest speed dating services in the world.

This speed dating company mostly focuses on Washington, DC, (hosting over 1,000 events in the city every year), but you’ll also find events in Baltimore, Los Angeles, and Rio de Janeiro, to name a few.

Attendance ranges from 20 to 2,000 people, and most members are 25 to 39. However, Professionals in the City also puts on events for those 40 and older. If you prefer to attend an event based on religion, ethnicity, or, of course, sexual orientation, there’s that, too. One happy member named Julia told the company: “This was a fantastic event. I thoroughly enjoyed it! Thanks for offering!”

At the beginning of an event, someone is “brutally murdered,” and then you’ll participate in numerous five-minute dates not only to see who you’re compatible with but also guess who the killer is. Another fun bonus is, if most people happen to vote you as the killer but you’re not, you’ll win an ugly rat trophy.

DateSwitch is “the fun, exciting, low-pressure way to meet.” Couple Jeremy and Lauren Bollinger launched the company, and they say it stands out for many reasons. “We focus hard on a handful of cities, and that is one reason DateSwitch.com events quickly become the most popular speed dating events in those cities and tend to experience much better turnouts,” according to the FAQ page.

DateSwitch is run by a husband-and-wife duo, and each event can cost as little as $35.

Most events cost $45, but if you sign up early, you’ll only have to pay $35. In addition, if no one catches your eye at an event, then your next one is free. Half the women will stay seated at the same two-top table throughout the night, while the other half move to the next table after the bell rings every five minutes.

On Speed Dating has some of the most niche speed dating events and singles parties in this industry. Not only do lesbian women have a ton of options just for them, but they also have options based on age, profession, ethnicity, religion, interests, diet, and so many other identifiers. For example, Femme for Femme, Not From NYC, 20-Something, and Hot or Not are among the niche events hosted by On Speed Dating.

The self-proclaimed number one site for singles events, SpeedDater has numbers on its side.

SpeedDater is based in the UK and has an 80% match rate.

The company was founded more than 16 years ago, hosts 70 events a month in 24 cities across the UK (including London), has over 46,000 active members, and has an 80% match rate.

In her SpeedDater testimonial, Charlotte said, “It was my first time speed dating, and it was really good fun. We had a lot of laughs. I’d definitely come to another event.” Register on the site, and you could be the next success story.

Launched in 2002, 25Dates.com has been recognized by CNN, the Discovery Channel, CityPulse, and other popular media outlets. Based in Canada, the company was founded by Ragna Stamm’ler-Adamson, who met her husband at a 25Dates.com event. They’re now happily married with a 10-year-old.

More than 50,000 people have participated in a 25Dates.com event, and the company boasts a high success rate. Over 76% of participants find at least one match at an event.

If you’re single and eligible, you might want to give the aptly named Single and Eligible a try.

Single and Eligible’s mini dates last seven minutes each, and you’ll receive info about matches the next day.

To get started, you’ll create a profile on the site, which is free to do. Then you’ll browse for events and choose one that meets your needs.

The company will send you an email with the details, and once you arrive at the venue (15 minutes early is recommend), you’ll get a match card and table assignment.

Each mini date is seven minutes long, and you’ll check yes or no after each, indicating if you want to go on a second date with that person. The team will notify you about your mutual matches by the end of the next day. The rest is up to you!

First Dates is a speed dating company with branches in dozens of US cities, including Los Angeles, Chicago, and Philadelphia. The team puts on two to five events every week, and they all have different themes.

First Dates also hosts singles parties for a more upbeat environment. You can check out the event schedule on each individual website, but most of the two-hour-long events cost $35 and start at 8 p.m.

Now Get Out There & Find the Gay Girl of Your Dreams!

Just like online dating sites, speed dating companies have adjusted their processes over the years to better meet singles’ needs and changing lifestyles. No matter your age, location, gender, religion, ethnicity, hobbies, education level, culture, background, or sexual orientation, you can find a speed dating event. For lesbian women, this list is a good way to kick-start things.

Where to Meet Lesbian Women

New to Lesbian Dating? 3 Things Every Woman Should Expect

How Can I Find A Good Girlfriend? An Expert’s 5 Tips