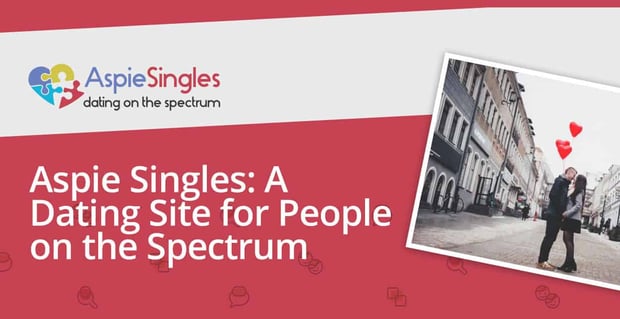 The Short Version: Aspie Singles has simplified the online dating world for singles on the autism spectrum. This niche dating site connects thousands of people who approach social and emotional issues in a unique way, and its discussion forum chips away at the stigma against autism. Aspie Singles offers a free basic membership to help newcomers get their footing in this new virtual terrain, and its plus plan has private chat features available for more serious daters.

My first dating profile bio was three words long: Nerdy, sarcastic bibliophile. It inspired many intelligent conversations and dry banter, but I retired it after an unsuccessful dating experience with a guy on the autism spectrum.

My date was upfront about his inability to detect sarcasm, and it wasn’t an issue when we were online because I could be careful about my wording. Unfortunately, our first date was full of miscommunications, and it frustrated both of us to keep going back to clarify jokes or euphemisms.

By the third date, I was ready to call it quits. “I think we’re speaking two different languages,” I told him.

He furrowed his brow, looking a little angry. “I’m speaking English,” he said.

Singles with autism can face many challenges in the dating scene, and romantic connections can sometimes get lost in translation. Fortunately, Aspie Singles has created a niche social space where singles across the spectrum can relate with one another and form meaningful connections.

“We make autism dating and Aspergers dating fun and easy,” the Aspie Singles team said. “We provide a platform for making new friends.”

The Basic Membership Includes Access to the Discussion Forum

More than 3.5 million Americans are currently living with an autism spectrum disorder. Some have a mild case that presents as an unwillingness to depart from routines or a difficulty in sustaining relationships. Other cases are more severe with symptoms including being nonverbal or unable to make eye contact.

The mainstream dating world can be overwhelming for an individual with mild autism and impossible for someone with severe autism. That’s why Aspie Singles has stepped in with an unintimidating networking solution.

The Aspie Singles dating site has the profile browsing features and search tools that are standard for online dating. What sets it apart is its community-building features. The site has an active discussion forum where members can ask questions and share their experiences as a person with autism.

Members can take their time building friendships and relationships on Aspie Singles.

Aspie Singles is a dating site where people across the spectrum can communicate and connect as they see fit. It can be a space for making friends, testing social skills, or even finding a romantic partner.

The site has a few premium options to suit different online dating styles and budgets. The Premium With Free Trial plan costs $0 for the first week and then $2.50 per week after that. This plan can be canceled at any time for no additional cost.

If these plans seem affordable to you, that’s by design. The Aspie Singles team has put the interests of its users first by creating pricing models that are flexible enough to suit people of all socioeconomic backgrounds.

“Love and friendships should be for free,” the team said. “Still, this site takes time and money to maintain, so we need to cover some of our costs.”

Aspie Singles provides a welcoming space for anyone open to dating or getting to know someone with autism. Its chat rooms are accessible and affordable, so no one is left out.

Aspie Singles has become the top service in the autism dating space because it takes the pressure off singles with autism. The site’s matchmaking tools allow members to find common ground more easily than they could on mainstream dating sites and apps.

Plus, this niche dating site provides supportive resources to make sure singles with autism can successfully negotiate interpersonal challenges.

The Aspie Singles blog has collected insights on dating and relationships from people who are on the spectrum and can speak with authority on the issues they’ve encountered.

“You have certain specific needs when you’re on the autism spectrum,” said Douwe Boschma, creator of Aspie Singles. “You ideally want to get into contact and feel comfortable with a person before meeting in person. That’s different from mainstream dating where you meet after four or five days.”

Aspie Singles highlights dating advice from the perspective of a person with autism.

The autism-focused blog articles tackle questions ranging from “Why do people want to hook up?” to “What does it take to not break up?” The articles can offer practical advice for emotionally charged situations and give autistic singles well-reasoned instructions they can understand and follow.

Aspie Singles provides a cheat sheet for online dating for free to help build awareness about how to navigate online dating and relationships as a person on the spectrum.

The Aspie Singles blog offers an empowering message for any single person wondering where to go or what to do to get in a meaningful relationship. Aspie Singles lets people know that being autistic doesn’t have to be an insurmountable obstacle in one’s dating or social life. Its advice articles can build up confidence in typically shy or anxious daters and show them a clear path forward in the modern dating scene.

“ASD is a beautiful gift of extreme focus and sensitivity that I would not trade away for anything,” Douwe in a post about autism and anxiety. “It comes with glitches, but also with superpowers.”

I was initially attracted to a guy on the autism spectrum because he was direct and thoughtful. But, at the end of the day, I was not the right partner for him. My sarcastic nature came through even when I was trying to suppress it, and neither of us felt heard or understood under those circumstances.

Not everyone in the mainstream dating world can understand the nuances of autism dating or successfully bridge those interpersonal divides. That’s why it’s important to have resources like Aspie Singles to raise awareness and build a community on behalf of people on the spectrum.

As an autism dating site, Aspie Singles can offer single men and women an avenue to friendships and relationships that are grounded in shared norms, ideas, and values.