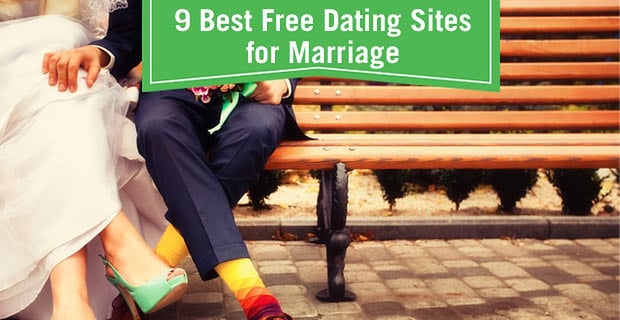 9 Best Dating Sites For Marriage (That are Free to Try)

As the saying goes: Happily ever after is not a fairy tale. It’s a choice. A majority of Americans will walk down the aisle at some point, but more than 21% of Americans who say they want to get married haven’t yet reached that milestone, according to a Gallup poll.

Finding that special someone isn’t as simple as it used to be — it’s not as common to meet someone at bars, gyms, or coffee shops, but popular dating sites have begun filling in that gap. Online dating has become the norm because it’s so easy and affordable, and you’re basically guaranteed to find dates.

If you’re looking to meet someone special and get married, you should sign up for a relationship-oriented dating site where serious people mingle and match. We’ve listed a few of our favorite dating sites for marriage to help you take that first step to your happily-ever-after story.

Match is responsible for more dates, relationships, and marriages than any other dating site, so it shouldn’t be a surprise that it’s our number one choice. Another important fact about Match is that it was the first dating site, having launched in 1995. Debbie and Jim are one of the thousands of success stories. “I was on Match for only two months when I was contacted by Jim. He was cute and sweet. We are very much in love,” Debbie said.

Practically 100% of the singles on EliteSingles are looking for a relationship, so you’re in good hands if you join this site. In addition, about 90% are at least 30 years old, and about 82% have a college degree. John and Cindy shared their love story with the EliteSingles team: “We went on 17 dates over the course of the week and celebrated our time together. There was no shortage of flirtation. She is a perfect mirror and a fantastic friend.”

eharmony has facilitated thousands of marriages in the U.S., and a big reason why is because of its 29 Dimensions of Compatibility Quiz — which focuses on deeper beliefs instead of superficial traits. Hundreds of people sign up for and take eharmony’s matching test every day, and the site does all the searching for you. Then you get to decide who you want to communicate with. Like a good wingman, eharmony will also guide you through the messaging process — try out one of their Icebreakers if you’re not sure what to say.

OurTime caters to daters who are over 50, especially those who want a lifelong partner. You can sign up for the site via a laptop, or you can download it for free via iTunes and Google Play. Donna and Rich met on OurTime and are now very happy together, and she offered a few tips for new users: “My advice for anyone searching is to keep looking and don’t give up. We feel truly blessed we found each other!”

You don’t have to be black or biracial to join BlackPeopleMeet — you can also be interested in pursuing an interracial relationship. Either way, the site doesn’t charge you to register, browse, or flirt. One former member from Germantown, Maryland, wrote to the site and said: “I was able to find a wonderful woman through the use of your site. We are currently dating, and it is quite serious. After one month, I truly feel as though she is the woman of my dreams, and when the time is right, I will ask her to marry me.”

As you can probably tell by the name, ChristianMingle is where single Christians go to meet and get to know each other. The site welcomes Christians within every corner of the faith as well as straight, gay, and lesbian Christians. For proof that ChristianMingle can work, just check out what Penny and Dwight have to say: “We are no longer lonely and fit perfectly together. Thanks, ChristianMingle, for helping bring these two souls together!”

SilverSingles focuses on the 50+ crowd, and you won’t have to pay anything to search for and receive matches as well as communicate in certain ways. On Google Play, Paul Toth said the SilverSingles app “seems good so far,” and Joe Phaneuf said “This app’s users seem to be more truthful and realistic than many other apps.”

Founded in 2012 by two sisters and a cousin, Coffee Meets Bagel (CMB) is a popular dating app that’s meant for serious-minded daters. You have a week to exchange contact information with a match, or else the connection disappears. Former CMB users Caleigh and Joe knew after one date that they belonged together, and they got married not too long after. For new users, Caleigh recommends, “Don’t pigeonhole yourself to subscribing to ‘a type’. Give most things you would not usually consider a try — one shot, that’s all. And be honest because one’s true colors will show eventually anyway.”

People like to think of Hinge as “the anti-Tinder” because it’s designed to help singles match based on common interests — not just looks. To start a conversation, you like or comment on a person’s profile and photos and vice versa. Hinge boasts having the highest success rate in terms of turning first dates into second dates and second dates into relationships. Stephen and Alexandra met on Hinge and are more than happy to sing its praises: “We started chatting, and it was clear pretty fast that we had the same sense of humor and a connection. We’ve been dating for about a year and a half now, and things are good.”

Say “I Do” To These Marriage Sites!

Marriage can be a wonderful thing — you feel like you’ve got a teammate for life who can go through all the ups and downs with you. You don’t have to hound your friends, scour your office, or stay out late at bars to find your perfect match, though. The dating sites above can do all the legwork for you. All you have to do is choose the site that sounds best to you!