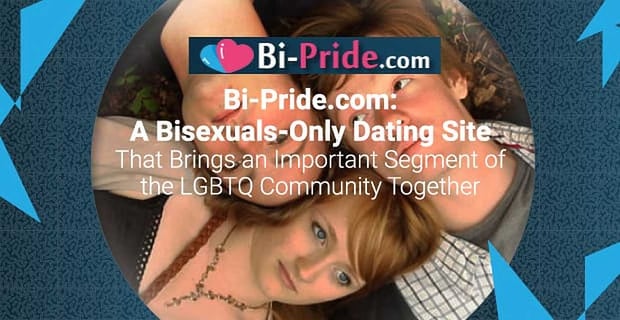 Bi-Pride.com: A Bisexuals-Only Dating Site That Brings an Important Segment of the LGBTQ Community Together

Short version: Bisexuals may be the majority within the LGBTQ community, but that doesn’t mean they’re the most accepted or understood. Facing discrimination and depression, bisexuals often feel unwelcome in both gay and straight circles. Bi-Pride.com, founded in 2001, is a dating site that aims to erase those feelings and help bisexuals meet each other. All of the site’s users are bisexual, so singles — or couples — can find partners who understand their unique struggles. Since its creation nearly two decades ago, Bi-Pride has attracted users from around the world and helped thousands of people find love.

In a 2016 survey, 5.5% of women and 2% of men in the US identified as bisexual. That represents a significant percentage of the US population, and those numbers are likely similar the world over.

However, bisexuals often face stigmas that individuals in the gay, lesbian, transgender, and straight communities don’t.

“The prejudice and hatred against bisexuals can make it hard for them to live,” said Bi-Pride.com’s Nick Young. “More and more, bisexuals are afraid of coming out, and some of them even feel self-suspicious. But being bisexual is not shameful.”

Since bisexuals ostensibly have a larger dating pool than either straight or gay people, there is a perception that they have an easier time finding dates.

Bi-Pride.com caters exclusively to bisexuals who are looking to connect with like-minded daters.

“Outsiders always think that think bisexual people have an easier time finding partners, as they can choose from a larger pool,” Nick said. “And they also tend to believe that bisexuals have twice as much sex as everyone else. But Bisexuals don’t find it’s easier to find a partner; instead, it’s harder.”

“It’s long been acknowledged that bisexual people are subject to high rates of violence and discrimination,” said Nick.

But Bi-Pride aims to erase some of this stigma by helping bisexuals find like-minded friends, partners, and communities. All of the website’s members must identify as bisexual.

With so many connotations surrounding bisexuals, Bi-Pride’s users often find it simpler to date within their own community rather than struggling with the perceptions of outsiders.

Although bisexuals may not receive as much media attention as the other groups under the LGBTQ umbrella, they make up around half of the community. Despite this majority status, however, bisexuals don’t always feel welcome in straight or gay communities.

“Despite being the largest population within the LGBT community, bisexuals tend to be seen as outsiders in lesbian, gay, and heterosexual communities. They often receive negative comments and are mistreated,” Nick said.

“It’s a small team that runs the site, but every person accepts bisexuality and bisexual people. We want to make some contribution to improve their situations.” — Bi-Pride.com’s Nick Young

Bi-Pride.com aims to create a community where bisexuals can interact on their own terms since they often face exclusion from both sides. And the site is run by a group of people who understand the unique struggles that bisexuals face.

“It’s a small team that runs the site, but every person accepts bisexuality and bisexual people,” said Nick. “ We don’t judge them, and we want to make some contribution to improve their situations through our bisexual dating site.”

Many bisexuals find love on the site, but some others are simply looking for companionship or confirmation that they aren’t alone in their identities.

“Bi-Pride.com has helped thousands of bisexual singles and couples find their match,” Nick said. “As a bi-only platform, we are among the most trusted and comfortable places for bisexuals to meet, chat, and date. “

Offering Daters a Range of Options

Membership on Bi-Pride.com is free, and users visit the website for a variety of reasons — from meeting friends to forming partnerships. When creating a profile, users can identify themselves as a “Bi Woman,” “Bi Man,” or a “Bi Couple.” Alternately, they can change the label from “Bi” to “Bi-Curious.”

Next, users choose who they’re interested in meeting — a woman, a man, either, a couple, or all of the above.

Bi-Pride’s users are not just from the US, as the website is popular with bisexuals in countries around the world — including Canada, Australia, the United Kingdom, and Germany.

Most users — around 80% — are between the ages of 20 to 45. Further, the site has more women users than men. But the number of female-female, male-male, and female-male couples the site produces is nearly equivalent.

Bi-Pride also features a blog where users can share their online dating experiences. Some recent blog posts include “How to Get More Responses on Bi Dating Sites” and “How to Choose Bisexual Dating Sites.”

Bi-Pride fosters connections — whether temporary or eternal — and has proven to be a trusted resource for bi-daters.

A Platform Where Bisexuals Can Feel Confident and Comfortable

Ultimately, Bi-Pride.com was given its name so that bisexuals could claim and be proud of their identity.

“We hope that all bisexuals can have bi-pride,” Nick said. “And that is the founding story as well as the mission at Bi-Pride.com.”

Most significantly, representation matters. Speaking on media representation for an article in the Huffington Post, Ana-Christina Ramón, assistant director of the Ralph J. Bunche Center for African American Studies at UCLA, said “What you see often becomes a part of your memory, and thus a part of your life experience.”

That sentiment demonstrates why Bi-Pride is so important. Many bisexuals feel shame in their identities, but they’re more likely to feel comfortable in their own skin — and find love — if they recognize that plenty of others share their experience.

And Bi-Pride.com helps them do just that.