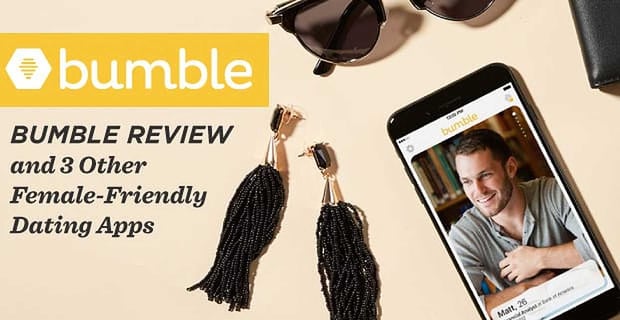 When creating a Bumble review, the thing that stood out to us the most is the dating app’s female-friendly features. Since 2014, Bumble has endeavored to improve the dating scene by empowering women to make the first move. And we applaud that.

According to a post on Quora, women receive anywhere from 20 to 130 messages a day on dating websites as long as their dating profile is new or recently updated. Women who’ve been on the site awhile with no updates tend to receive about 15 messages a day. Which, honestly, is still way too many to sort through.

It can be overwhelming to be a woman on a dating site or app where anyone can send messages. Women can end up peppered with pickup lines and unsolicited “sup girl” messages, and that burns them out on the experience. That’s bad news for women, but it’s also bad news for men who see low response rates for their messages. Bumble has changed that and put the power to communicate in women’s hands, thus making the dating process more fun and less stressful for both genders.

Below are our thoughts on the app, and we’ve included three other apps that also provide a great experience, particularly for women.

Bumble was founded in 2014 by Whitney Wolfe (who co-founded Tinder), with the help of Badoo CEO Andrey Andreev and former Tinder employees Chris Gulczynski and Sarah Mick. These dating experts came together because they saw something amiss in the online dating scene, and they wanted to make it more a female-driven place.

The app’s motto is “Life is short — make the first move.” Whether that’s for networking, friendship, dating, or love, Bumble’s ultimate goal is to do away with outdated dating rules that say men have to be the ones to initiate.

To sign up, you’ll need to sync up your Facebook, which Bumble will use to pull information like your name, age, college, and job. This also helps to ensure everyone is who they say they are.

In terms of photos, you’re allowed to add up to six, and they can come from Facebook, your phone, or you can take a new one right then and there. The team moderates photos and flags any inappropriate content, so no shots of celebrities or you in your underwear or blocking your face. Bumble has also banned pictures with guns in them.

Once a woman and man both swipe right on Bumble, she has 24 hours to send a message. This doesn’t apply to LGBT singles.

As we mentioned, the biggest difference between Bumble and other dating apps is women have to send the first message to men. This doesn’t apply to same-sex connections, obviously, where either party can send a message.

Once a straight man and a straight woman mutually swipe right on each other (matches are called Bees), she has 24 hours to message him or the connection goes away forever. If he wants more time before replying, he can extend the deadline to another 24 hours, which also shows the woman that he’s really interested in chatting.

However, he can only extend a match once a day and once for each connection — unless he’s a paying member. Women with paid memberships also have the option to extend the deadline.

If you accidentally swiped left on someone, shake your phone to unlock the Backtrack feature. You’ll get three of these for free, and they’ll refill after three hours. You can earn more for free by spreading the word about Bumble on Facebook, Instagram, or Twitter.

Bumble was created in 2014 as an alternative dating app that puts women in the driver’s seat.

Bumble has more premium features, but you’ll have to upgrade your membership to access them. It costs $9.99 a month, but you’ll save money if you prepay for three or six months. The features include Beeline (see users who’ve already swiped right on you), Rematch (keep matches who should’ve expired), and Busybee (receive unlimited extends).

Since 2014, Bumble has received a lot of praise, especially from women. “App is cool and I like that I get to be the one to make first contact,” said Alisha Rocks in her review on Google Play. The main downside we’ve seen about Bumble is that some people don’t like the fact that they have to register via Facebook. Andy Finucan, who also wrote a review on Google Play, said:

3 Other Female-Friendly Dating Apps Besides Bumble

We’re fans of Bumble, but it’s not the only dating app out there that we’d recommend to women. There are three, in fact, and they have their own unique histories, teams, features, success stories, and pricing that you should consider.

Zoosk was created in 2007 and was one of the first dating apps on the market. It’s been paving the way for others like Bumble ever since. Integrated with Facebook and Google+, the app has a quick signup process that only takes a minute or so, and it’s 100% free.

Unlike Bumble, you don’t have to use an existing social media profile to create a Zoosk profile. You can just join via the homepage, the App Store, or Google Play.

Size is another thing Zoosk has going for it. It’s been downloaded more than 30 million times and receives more than 3.8 million monthly visitors. What we think women will love most is the Carousel — which suggests matches to you, and then you can decide to like them (click the heart icon), pass on them (click the X icon), or save them for later (click the word maybe).

Match is the grandfather of online dating, having been founded in 1995. Throughout its long history, Match has perfected its online dating experience for desktop and then copy/pasted the design that when it launched the app. Whether you use an Android or iOS device or a laptop, you can get Match for free.

As you can see, Match is a really popular dating platform. It gets over 13.5 million visitors on a monthly basis, but something also worth mentioning is it has over 30 million members in general. Provide your criteria (gender, age, location, sexual orientation, interests, etc.), and search for dates and partners on your own as well as receive them from Match.

Serious-minded daters flock to Elite Singles because of its large demographic of educated members — more than 80% have earned a bachelor’s, master’s, or doctorate degree. Every week, more than 165,000 people join the app, and every month, more than 2,500 find love through it.

Once you join, you’re given a free membership that never expires and allows you to upload your information and photos, browse profiles, receive compatible profiles, and communicate in several ways (e.g., virtual winks).

Say Goodbye to Nude Pics & “Hey, babe” Thanks to Bumble!

You’d think receiving 20 to 130 messages a day would be exciting for women, but it becomes more of a job than anything. Plus, the good guys can be overlooked because they’re hidden in a sea of “What’s up, cutie?” and dick pics. Bumble strives to eradicate this problem by putting women in charge, and it seems to be working. But life is all about having choices, so if you’re going to sign up for Bumble, why not give some of these other apps a try? They’re all free, so it’s not really a gamble!

As a Contributing Editor for DatingAdvice.com, Brittney’s research background gets put to good use developing thorough articles and guides for the informed dater. She enjoys going on new adventures and finding activities that provide unique mental and physical challenges.

What Should I Not Do While Dating?

How Online Dating Has Changed Society