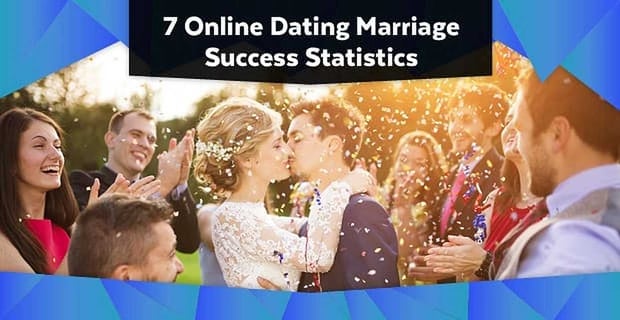 Online dating has been around since the ’90s, and it’s become pretty commonplace in our lives. But how well is it really working? Is online dating getting people into the relationships they truly want? Is it actually leading to marriages that last?

You’ve probably heard stories about couples who met online, fell in love, and got married. Online dating success stories are all over the web. However, we wanted to go beyond anecdotal evidence and tell you about the online dating statistics regarding love and marriage.

Research shows that people who meet online often head to the altar sooner than those who meet through friends, at work, at a bar, or other places like that. Michael Rosenfeld, a sociologist at Stanford, said there are a couple of reasons for this.

“You can be more selective because you have a bigger group to select from,” he told The Washington Post. “A lot of the information-gathering that courtship is really about is sped up by the information you can gather from the profiles and from a person before actually meeting them.”

2. Over 17% of Marriages Start Through Online Dating

According to the Statistic Brain Research Institute, 1 in 5 relationships and a little more than 1 in 6 marriages begin online.

About 17% of marriages and 20% of relationships begin online.

We expect those numbers are only going to grow, as more than 49 million people have tried online dating, and nearly 8,000 dating sites exist in the world.

We also expect those numbers to grow because most people’s intent with online dating is to meet someone for marriage or at least a long-term relationship. For example, 80% of Tinder users say that — not a hookup — is what they’re looking for.

3. Online Marriages are Less Likely to End Within the First Year

Not only are people who are meeting online getting married sooner, but their marriages are also lasting longer than those of couples who didn’t meet online. The former group is less likely to separate or divorce within the first year of marriage than the latter.

“We found that online dating corresponds with way more interracial marriages, and way stronger marriages, from a mathematics perspective,” Ortega said in an interview with Forbes.

This fact goes hand in hand with the last one. In addition to online couples making it through the first year of marriage more often than offline couples, they also say that they’re more satisfied in their relationship.

This research paper, which is titled “Marital Satisfaction and Breakups Differ Across Online and Offline Meeting Venues,” was led by University of Chicago researchers, and the results were published in the Proceedings of the National Academy of Sciences.

“Marital outcomes are influenced by a variety of factors. Where one meets their spouse is only one contributing factor, and the effects of where one meets one’s spouse are understandably quite small and do not hold for everyone,” said John Cacioppo, the study’s lead author and the Tiffany and Margaret Blake Distinguished Service Professor in Psychology at the university. “The results of this study are nevertheless encouraging, given the paradigm shift in terms of how Americans are meeting their spouses.”

5. Over 2 Million Couples Met on eharmony

eharmony is one of the most popular and successful dating sites in the world — launching in 2000 and having more than 30 million singles sign up. So it makes sense that eharmony would facilitate a majority of relationships when compared with some of its competitors.

According to eharmony, over 2 million couples have gotten into relationships thanks to its tried and true matchmaking services.

According to the site, approximately 542 members tie the knot each day, and in total more than 600,000 members have walked down the aisle.

While we’re talking about eharmony, it’s also worth mentioning the site reports that its divorce rate is lower than that of the national average: 3.86% vs. 50%. We think eharmony’s 29 Dimensions of Compatibility Quiz may have something to do with it.

New members spend about 25 minutes filling out their profile and answering more in-depth questions than you’d find on some other dating sites. These include “What are you passionate about?” and “If your best friends had to pick four words to describe you, which four would they pick?” You can read our article to learn more about eharmony’s questionnaire.

7. Over 80% of Millennials Would Marry Someone of a Different Race

A majority of people ages 18 to 35 don’t care about their future partner’s race.

The Pew Research Center reports that more than 8 and 10 millennials say they are open to marrying someone who isn’t the same race as them.

Business Insider found millennials don’t think premarital sex is a big deal, prefer to live with a romantic partner before marrying him or her, and are waiting longer to get married than previous generations.

Almost 60% of millennials are single and have never been married compared to 16% of Generation Xers, 10% of baby boomers, and 4% of traditionalists.

There’s a reason online dating is still around after all these decades — it works. The evidence is all around you, including in this article. So if marriage is your dating end goal, online dating should be in your dating arsenal among being set up by friends and approaching strangers at bars and events. It definitely won’t hurt your chances!

9 Best Dating Sites For Marriage (That are Free to Try)

“How Much Does Zoosk Cost?” — (2 Budget-Friendly Choices)