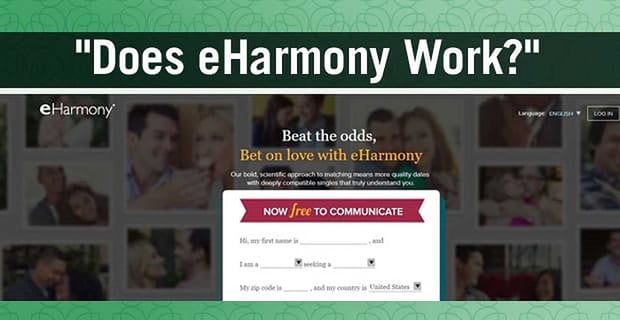 Over the years, eharmony has worked its magic in a lot of people’s lives and led to some pretty special love stories.

Rachael was on eharmony for four months and had become “exhausted” with going through match after match and no one being quite right for her. She was a few days away from letting her eharmony membership expire when she was matched with Nick, and she decided to give the dating site one last try.

Good thing she did because they immediately hit it off, flying through eharmony’s Guided Communication and arranging their first date within a week. At a charming French restaurant in downtown Seattle, what was supposed to be an hour of dinner and drinks turned into five hours of great conversation and undeniable chemistry. After two weeks of dating, Rachael and Nick became exclusive, and then two years later, Nick proposed.

Rachael admitted this might never have happened without eharmony. “Thank you, eharmony, for matching us. We probably couldn’t have done it without you! I figured we ought to give credit where it’s due!”

Success stories like Rachael and Nick’s are told every day on eharmony, yet some singles still wonder if eharmony works. They question if the dating site and app can help them find true love in the real world. But there’s really no need to worry because we’ve found numerous facts and figures that prove eharmony can work for singes who are serious about building a lasting relationship.

Seminary professor, Christian theologian, and psychologist Dr. Neil Clark Warren co-founded eharmony in 2000 because he wanted values-driven singles to have a dating website that could cater to their needs.

He envisioned a dating site that would use psychological principles to identify compatibility and match people who had serious relationship potential. The team’s 20-year dedication to this mission is just one of the many reasons eharmony is so special in the online dating scene — and that’s why we’ve given them 4.5 out of five stars in our comprehensive eharmony review.

Besides a high rating from our dating experts, eharmony has plenty of other incredible numbers to back them up. If you’re still asking “Does eharmony work?” then we’ve got some stats to assure you that it does. Let’s break it all down.

Men’s Health estimates that 15,000 singles a day fill out eharmony’s questionnaire. This one-of-a-kind personality test takes about a half hour to complete and uses 32 dimensions of compatibility to pair up people who have a lot in common. These factors include core traits, such as emotional temperament, social style, cognitive mode, and physicality, and vital attributes, such as relationship skills, values and beliefs, and key experiences.

Fact 2: 15 Million eharmony Matches are Created on a Daily Basis

According to the Wall Street Journal, 15 million matches are made on eharmony every day. Some more good news is eharmony delivers all of their matches directly to their members, so if you sign up, you won’t have to do any of the work.

A report conducted by eharmony called Married Couples by the Numbers Facts shows 71% of female members and 69% of male members find their future husband or wife within a year of joining the site. Just let that sink in for a minute. If you created an account on eharmony today, by this time next year, you could be with your long-term partner.

The fact is, eharmony is a powerful matchmaking tool that can change people’s lives by introducing them to the love of their lives.

Fact 4: eharmony Marriages Account for 2% of the U.S. Total

According to eharmony’s calculations, the dating site has been responsible for 2% of U.S. marriages, and no other dating site can tout that. We’d say it has a lot to do with the time, effort, and expertise they poured into their accurate matching system. At the end of the day, eharmony truly cares about helping singles find love, and they’ll do whatever they can to make that journey fun, easy, and quick.

Fact 5: Over 542 People a Day Get Married Thanks to the Dating Service

The eharmony mission is to strengthen marriage as an institution, and we’ve found hard evidence that the dating site is doing just that.

In an article for OnlineDatingPost, an industry news blog, Dr. Neil wrote that more than 600,000 couples who met on eharmony have gotten married. That walk down the aisle started with the creation of an eharmony account.

This shows that on eharmony matches lead to dates, dates lead to relationships, and relationships lead to marriages. If that’s what you’re looking for, you’re in good hands.

In that same article, Dr. Neil said of those 600,000+ eharmony marriages, only 3.86% have ended in divorce. Couples who meet online are actually less likely to divorce.

With half of U.S. marriages ending in divorce, looks like the odds of finding and keeping your happily ever after might be greater if you use the eharmony dating service.

If you’re going to take a chance on a dating site, you should feel confident taking that chance on eharmony. Rachael had her doubts, but now she’s one of the 2 million happy eharmony couples who are sharing their story with the world.

There’s a reason eharmony is consistently voted one of the most trustworthy and effective dating websites in the online dating world. It uses psychology to create matches that last and help people have a good experience from the moment they sign up with a free membership.

We’ve given you seven facts and figures that show eharmony actually works, and we expect those numbers are only going to grow. As the site’s motto says, “Beat the odds, bet on love with eharmony.” You’ll be glad you did!

How Much Does eHarmony Cost?

What are Zoosk Coins & How Do You Get Them for Free?

7 Best Polyamorous Dating Sites (That Are Free to Try)