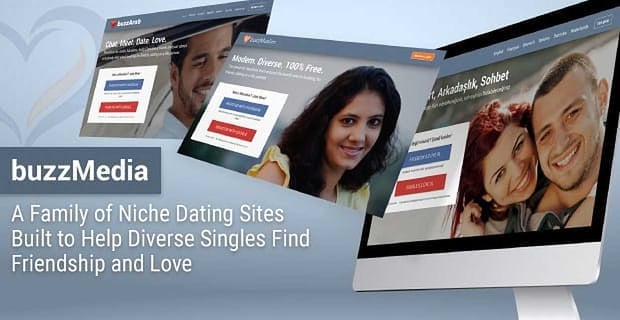 The Short Version: In addition to wanting a partner who is kind, smart, funny, and attractive, many singles are also seeking someone who shares a similar background — especially when it comes to religion, ethnicity, and nationality. As a result, niche dating apps, such as those under the purview of buzzMedia, have become widely popular. The company’s three flagship online dating properties, buzzArab, 99Turkiye, and buzzMuslim, make it simple for singles in the Arab, Turkish, and Muslim diasporas to find partners who share their beliefs and values. We recently sat down with buzzMedia Founder Sherif Abdelkader, who told us how he created the apps to fill a need in these underserved communities in the online dating world. He said his mission is to help connect singles for friendship, love, and potentially lifelong commitments.

Everyone deserves someone to love, and there’s no reason it should be hard to find a partner with whom to connect. At least that’s what Sherif Abdelkader, Founder of buzzMedia, believes. Family owned and operated, Sherif’s company oversees three niche dating apps to help singles in Arab, Turkish, and Muslim communities worldwide find their soul mates.

“A lot of people are looking for someone with the same religious background, ethnic background, or national background as them,” he said. “By using niche online dating, it increases your chances of finding someone compatible. On other dating apps, you’ll have to filter through 10,000 profiles to find five or six potential matches.”

The dating platforms owned by buzzMedia were built to connect singles with similar backgrounds.

“Each one has its focus,” he said. “The buzzArab app is focused on people of Middle-Eastern origin, either in Arab countries or living abroad. The 99Turkiye app is mostly for people in Turkey or Turkish people living in Europe. The buzzMuslim app is generally for Muslims; however, there is a larger number of Asian Muslims, specifically in and near India, who use the app.”

Sherif started serving singles with buzzArab, which represents 80% of the group’s traffic, and added additional apps as he analyzed which singles weren’t being served or weren’t being represented well. Sherif also proudly stated that BuzzMedia’s sites are some of the only Arab and Muslim dating platforms that are LGBTQ friendly. And he and his team continue to enhance their niche apps, which can be used on web, iOS, and Android.

The flagship and largest site of the group, buzzArab, boasts an impressive 100,000 daily users speaking eight different languages. The site is also home to 320,000 users from all over the world, and its numbers continue to grow. While buzzArab was created to serve the Arab community, the platform welcomes people from all ethnicities, cultures, and religions.

The app’s users speak very highly of buzzArab, especially those who’ve had poor experiences with other apps specifically marketed to Arab users.

“I had bad experiences using other Arab apps, but buzzArab is very professionally run, and, as a female, I feel safe using it,” said one female member.

The membership on buzzArab is diverse and hails from countries around the globe.

The site offers a wide array of easy-to-use features to help you connect with other singles who meet your specific criteria. In addition to robust advanced search features and online chatting, users can control their notifications and block or hide users they’re not interested in.

The buzzArab platform also ensures you’re talking to real people looking for love, not bots or scammers. The site employs both manual and automatic methods of profile management, ensuring there isn’t any inappropriate content or fraudsters on the site.

As Sherif noted, the goal is to make it simple to register, search, chat, and find your soul mate.

With 20,000 daily users, 99Turkiye is buzzMedia’s second-largest niche dating site. The app provides a place where Turkish people from around the world can meet friends, someone to date, or even their life partner.

While singles across the globe’s Turkish diaspora regularly connect on the site, it is most used by people in Turkey or Turkish people living in Europe. The site operates with a philosophy that values diversity and welcomes all religions, races, and ethnicities. And one of the best parts of membership is that communication with other members is completely free.

99Turkiye gives Turkish singles the opportunity to find each other no matter where they are.

The site’s search features make it simple to find others with whom you might be compatible. Members can search by location, age, and even language.

At 99Turkiye, users can bond with other members over the 10,000 reasons to halay and playfully discuss whose grandfather makes the best Turkish coffee this side of Anatolia. And, with seven languages available, it’s easy to see why the site has become a global meeting place for Turks worldwide.

“It’s great that I am a Turkish citizen living in Canada and can find the opportunity to meet Turks everywhere in the world,” said one 99Turkiye user.

Launched in the last six months, buzzMuslim is making slow but significant gains, and currently welcomes more than 1,000 daily users. This app is a little different from the others, as it not only works to bring Muslims together for friendship and love, but also welcomes non-Muslim members who would like to get to know more followers of the Islamic faith.

Members converge on the site to share pictures, chat in the app, and connect over common backgrounds. Sherif said buzzMuslim was built to bring an individualized Muslim experience to users. And the site’s users write in testimonials that this is exactly what they’ve experienced.

“[It’s] a service for the modern Muslim that doesn’t try to push its views on to you and just lets everybody be themselves,” said one member.

The team at buzzMuslim works diligently to ensure you can be your authentic self and stay safe with the site’s many fail-safes and features. Profiles are crafted so you don’t receive unwanted messages from anyone. Sherif said the aim is to keep safety and privacy top of mind while curating an easy-going environment in which to meet new people.

buzzMedia: Founded With a Mission to Link Compatible Souls

Having an understanding of its clientele is what makes buzzMedia’s apps different from others in the online niche dating space. For instance, Sherif understands his clients might be more conservative than others in a more mainstream site, and he tailors his features to meet their needs.

“We give users the ability to make photos private,” he said. “We also offer protection for photos such as not allowing a screenshot to be taken of photos. This caters to our more conservative clients. It makes people feel safer putting their photos on an app.”

Sherif told us he plans to continue to innovate his apps as new technology arises. Apple Watch and Apple TV apps are currently in the works so users can more easily manage their messages and profiles.

“Basically, we are looking at all the evolving technologies and seeing how we can integrate them into our platform,” he said.

In addition to staying current with changing tech, Sherif said he also solicits feedback from his users to create the best system possible because, after all, they are the ones using it to find their soul mates.

Sherif said he and his team feel satisfaction in what they do.

“It’s nice that you’re doing something that people can really take advantage of,” he said. “It’s nice to be able to provide a service to people that can change their life.”