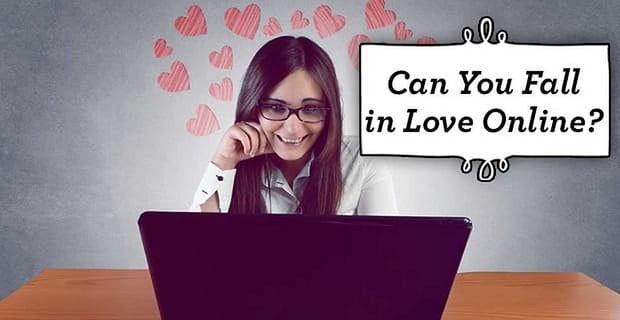 “Can You Fall in Love Online?” — (5 Real Stories That Prove It Can Happen)

When creating a dating profile for the first time — or for the 20th time, actually — it’s normal to have doubts and maybe even to wonder if you really can fall in love online. I mean, is that even realistic?

Shows like MTV’s “Catfish” and stories like Manti Teʻo’s can give online dating, and the internet in general, a bad rap and tend to scare people away. But, honestly, it’s the solid way to meet some quality people, and you can absolutely find a boyfriend or girlfriend online.

Research by the Statistic Brain Research Institute shows that 20% of relationships and 17% of marriages start online. Not to mention dating sites like Zoosk and Match have 38 and 30 million users, respectively. Your odds of finding someone compatible are significantly greater online than they are in, say, a bar or by having friends set you up.

Can you fall in love with someone online? Yes, you can. It may take time and effort, but it’s definitely possible. Below are five heartwarming stories that prove it can happen to anyone.

Newly single and with her kids growing older, Anna turned to eharmony to find a loving companion. She was on the site for six months, receiving match after match without anything sticking… until she met Sam.

“His profile struck a chord — he was very spiritual, for one thing, which was important to me,” Anna told Woman’s Day.

The two hit it off right away, emailing and having hour-long phone calls for six weeks before meeting up. Another six months later, Sam and Anna got engaged.

Many experts say prior online communication, like the kind Anna and Sam had, can create a stronger bond in real life.

“Online technology, as well as SMS, enables having a connection that is faster and more direct,” according to Aaron Ben-Ze’ev, author of “Love Online: Emotions on The Internet” and a University of Haifa philosophy professor. “It also enables ongoing dialogue as compared to the slow interactions that are typical of letters.”

When Amanda joined JDate, she wasn’t too concerned with finding a date. She didn’t even put up any photos of herself — she just wanted to be able to see all of her cousin’s profile. Not long after, Aaron reached out because he saw that she went to Jewish summer camp while growing up.

They talked for several months and decided it was time to see if the chemistry was there in person as it was online, even though she had never seen a picture of him.

JDate was the site Amanda and Aaron met and fell in love on.

“All I knew was that he was tall and had brown hair and blue eyes, so every guy I saw who kind of fit that description, I would look at him and I would say, ‘If that were Aaron, would I still like him?'” Amanda recalled to CNN. “The answer was always yes.”

They met at the airport when Aaron was returning from vacation to go to college. “I watched him walk off the plane, and I remember thinking, ‘This is so weird because it’s not weird.’ It felt like I was meeting an old friend,” she said.

Amanda and Aaron became official a few months later, and then after a year, discovered both their grandmothers attended the same Jewish summer camp in Cleveland, Ohio — their story coming full circle. At that moment, “fate was sealed,” as Amanda says. And they lived happily ever after.

Darren and Gina fell in love online over their passion for rugby, specifically the All Blacks, and their fondness for “silly humor” and romantic gestures. They both admitted to Express that they began falling for each other within days.

They spent the next three months exchanging thousands of emails and Facebook messages and dozens of phone calls — even though they were in opposite time zones, with her living in New Zealand and him living in Wales. Darren would send Gina poems, and they’d shared what they were looking for in a partner.

“I knew even then that I was going to marry her. We’d never met, but I was in love hook, line, and sinker,” he said.

Darren and Gina’s online courtship lasted for three months and culminated with him proposing over the phone.

His colleagues thought he’d lost his mind, but he knew she was the one for him. Six weeks after their first online conversation, Darren proposed to Gina on the phone — from 12,000 miles away and bent on one knee. She said yes, he moved to New Zealand, they got married on New Year’s Eve, and the rest is history.

“I’d never done anything this crazy and impulsive before, but I’ve never felt the love I have with Darren,” Gina said.

Numerous studies suggest that talking online with someone beforehand can improve face-to-face relationships. One such study is the “Relationship Formation on The Internet,” which tested two groups of students, one that met online and one that met in person, to see which one was more comfortable with each other. Turns out, it’s the online group.

Seems like this definitely worked for Darren and Gina.

Paul and Vicky probably have one of the most unique love stories out there. They connected on the online video game “Final Fantasy” via their avatars, Andurus and Branwen.

For five hours a night, they would play the game and get to know each other, and the attraction was cemented when he sacrificed his character in the game to save hers.

Thanks to “Final Fantasy,” Vicky and Paul found one another.

“It might sound strange to people who have never played an online game, but the fact he was a traditional man with values to match and was protecting me was what first drew me to him,” Vicky said. “Andurus, albeit a cartoon type character, is strong and physically attractive, but it was Paul’s caring personality that really shone through.”

“As soon as I saw Vicky, I knew she was the one for me. Incredibly, although we’d never met in real life before, because of our virtual fantasy relationship, we already felt we knew about one another,” Paul said.

They started dating in the game, and their relationship carried over into the real world once they met in person. Paul and Vicky were married in September 2009, and their wedding cake featured their avatars.

Jon flew for more than 30 hours from South Asia to California to meet Katie, the girl he met online and who he’d been calling and emailing with for the past two months. He had his grandmother’s ring with him and was going to propose.

As Christian missionaries, Jon and Katie bonded over their desire for helping others, and Jon described her as his “heart in the form of a girl.”

“Everything struck me about her,” Jon said about the moment he saw Katie. “In all reality, the thing that attracted me the most about Katie all along was her heart, which was and is incredibly beautiful. But when I saw her in person, I was able to see her inner beauty radiate through her eyes and her smile. I was a goner pretty quick.”

As you can probably guess, she said yes, and they’re now happily married and have a daughter.

Is Finding Love Online Really a Possibility? The Answer is a Resounding Yes!

These are just a handful of stories out of thousands or millions, as Statistic Brain showed us. When you’re looking for that special someone, don’t forget to include web-based resources, like online dating, in your arsenal. It’s easy and effective and potentially life-changing. Who knows, by this time next year, we could be writing about your success story!

23 Best Dating Sites During Coronavirus in 2023