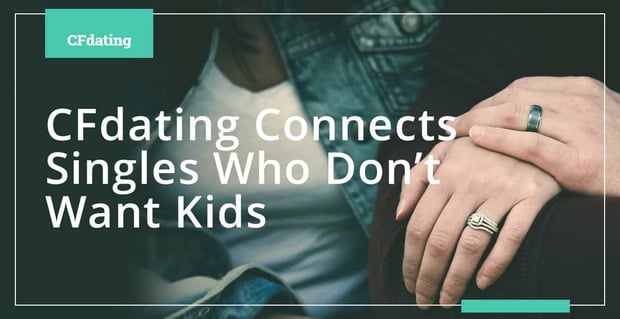 CFdating Connects Singles Who Want Long-Term Relationships Without the Kids

The Short Version: For previous generations, getting married and starting a family was an inevitable package deal. It wasn’t until society progressed toward greater equality and independence that purposely childless couples became a more common and viable option. Today, CFdating offers a dating space for singles who want to stay child-free now and forever. The niche dating app focuses on helping singles find long-term relationships that meet their standards and don’t involve co-parenting or childrearing.

Some singles dream about finding that special someone and immediately starting a family. Others cringe at the thought. Having children isn’t in every single person’s plans, and CFdating is a child-free dating platform that encourages singles to make their childless intentions known upfront.

CFdating was designed to promote and empower singles who are drawn to the child-free lifestyle.

The singles on CFdating are childless by choice, and they want to stay that way. These individuals have often put a lot of thought into their futures, withstood questioning from family members, and concluded that having children isn’t in their best interest.

CFdating doesn’t judge singles for their choices. Instead, the app helps childless individuals find people who have the same inclinations and plans. Because who wants to argue with a date about the downsides of having children? Talk about a mood killer.

CFdating is a dating platform for singles who prioritize other things besides starting a family.

Singles who are looking for dates and relationships must occasionally have difficult conversations about their choices and lifestyles. Nipping the child issue in the bud on CFdating can be a great help.

“When my wife and I were dating and got married, it never occurred to me that I could ask myself the question about whether I want kids,” said Patrick, the founder of CFdating. “It’s so normal that I expected it would happen.”

But when the couple thought about what they wanted, they realized they were part of a growing demographic of adults determined not to become parents. These adults may not want a family, but they still deserve a steady and fulfilling relationship. CFdating is a dating app where staying childless is #relationshipgoals.

Patrick and his wife have embraced the child-free lifestyle and found support for their choices online. A few years ago, Patrick’s wife started following a child-free sub-Reddit community, and the couple got to know many footloose and fancy-free people who shared similar values and interests.

“We thought about it and went through the reasons — like how you save a quarter-million dollars per child if you don’t have a kid, the freedom, travel, ability to sleep in, and do whatever you want when you want and enjoy each other,” Patrick said.

The decision not to have children was a no-brainer for Patrick and his wife, but they realized not everyone had it so easy. Many singles in the childless sub-Reddit community talked about struggling with this issue because they couldn’t find a partner who felt the same way. Not wanting children can be a serious relationship roadblock.

Some people say they don’t want children, only to change their minds later on. Some agree to forego having children at present, but expect to reopen the conversation in a few years.

CFdating makes sure singles are on the same page about not wanting children. Patrick said the dating site was his wife’s idea.

“The sub-Reddit forced her to think about why it is never publicized that you can be child-free. Why does everyone think you’re expected to have kids?” he said. “So, she really grew into that. That’s what she figured out she wanted to do.”

CFdating matches singles based on shared lifestyles and interests.

Patrick is a web developer with an entrepreneurial streak, so he took his wife’s idea and ran with it. With some market research, the couple discovered that there were only a few dating platforms that specifically catered to people who willingly choose not to have children.

That’s when the couple decided to start CFdating and make this important choice a defining issue in the online dating scene.

Over the years, Patrick and his wife have refined the CFdating platform with unique features. The app includes search filters for child-free singles who have had a vasectomy or gotten their tubes tied. It’s even possible to search for people who are planning to have these procedures done in the future.

“We only want child-free users. We don’t allow people who are on the fence or trying to get in for any reason,” he said. “The numbers aren’t a big deal; we want an authentic community.”

A Dating Site That is Open to Global Singles

In 2018, Patrick launched a beta version of the site to see if there was as much interest in child-free singles as there was in the #childfree hashtag. It was open to everyone on the globe, and it was free at first in the United States.

Sure enough, there was a lot of interest from users. After a successful test run, Patrick took down the site and dramatically improved it. He launched the full version in December 2020. Singles can create a CFdating profile and browse the database for free. Messaging is available to premium members. The subscription also allows singles to browse incognito and see who’s checking out their dating profile.

The users of CFdating range in age from 18 to 60, but they all have one thing in common: They absolutely don’t want children.

Creating a free CFdating profile allows singles to be honest about their dating and relationship goals.

“If you are not child-free, we will figure it out and respectfully decline that account,” Patrick said. “If it’s not approved, you can browse but you’re invisible to the community. We have ways of weeding out most of the folks who come in but aren’t child-free.”

Of course, some people may change their minds about having children over time. But the singles who intentionally seek out a childless dating network tend to be more committed to their choice. Patrick takes the protection of the CFdating community seriously. He has received positive reviews from users who are happy with their experience and appreciate the low-pressure, child-free atmosphere.

“Let me start by thanking you all for creating this great platform so that people like me who never want to have kids can easily find love with like-minded people,” said Charles, who signed up for the dating site last year.

CFdating Listens to Feedback From Users

Signing up for a dating site or app doesn’t necessarily mean signing up to be a parent someday. CFdating stands behind the idea that singles can create relationships and marriages that don’t involve procreating — and be perfectly happy with their decision.

Patrick told us he hopes to see the CFdating community grow and raise awareness about alternative lifestyles for singles without children. Within the next year, Patrick said he plans to roll out some new features and partnerships that will make the online experience more impactful than ever.

“Our goal is to keep growing CFdating by feedback,” Patrick said. “We do a lot of community polling, and that’s a key aspect. We’ll offer new filters that the community really wants. We also want to provide the best customer service and keep ensuring that the community is authentic.”