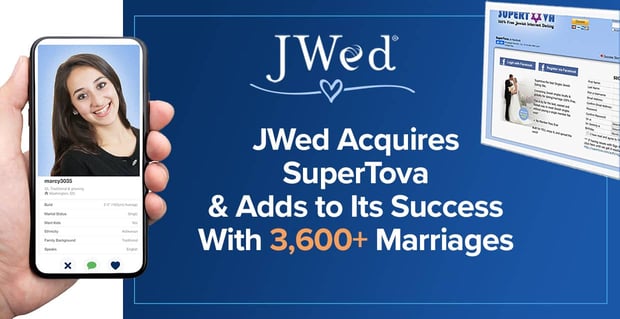 The Short Version: Finding a meaningful relationship in the Jewish community can be challenging in today’s climate. Swiping apps often emphasize dating for superficial reasons, and it can devalue relationships over time. That’s why Jewish singles often turn to JWed when they’re ready to get serious and take the time to get to know someone special. The niche dating platform focuses on connecting Jewish singles with serious partners and has been a trustworthy matchmaker in the industry for two decades. Since its launch in 2001, JWed has facilitated more than 3,600 marriages, and it has acquired other Jewish niche platforms, including SuperTova.

In the early 2000s, many couples were discovering the upsides of online dating, but they often didn’t like to advertise that they’d met the love of their life through a dating website. That was something they tended to keep private.

However, the expediency of meeting a date or love interest online is hard to deny. Over the years, online dating sites and apps have become much more accepted and even celebrated part of the matchmaking world.

A niche dating site called JWed has helped Jewish singles find long-term romantic partners for more than 20 years. The platform has seen the stigma against online dating disappear, and it currently holds a special place in thousands of happy couples’ hearts.

What’s more, JWed’s recent purchase of SuperTova further solidifies its position as a top Jewish dating for marriage service. The company has previously acquired Dosidate, Futuresimchas, and Hareiat, and now it adds SuperTova to its portfolio.

Jewish singles no longer have to consult community matchmakers or ask for family members to fix them up with strangers. If a single person wants to make a date that has the potential to lead to marriage, then all it takes is an online dating account on JWed.

The COVID-19 pandemic, with its stay-at-home mandates and social distancing, has made it more difficult for Jewish singles to meet in organic ways in the community. So, it’s no surprise that JWed has seen a dramatic increase in membership over the last year.

“Today, online dating for most has become the first port of choice, rather than the medium of last resort it was years ago,” said Derek Saker, Co-Founder and CMO of JWed. “And we are hoping to reach 4,000 marriages as a milestone in a few weeks.”

JWed, which launched in 2001, averages eight engagements or marriages a month. It offers a wholesome space where people of the Jewish faith can find each other — no matter where they live in the world.

“Thanks to your site (and the help of The Almighty), we were able to connect,” said a 30-something named Jaime, who married a Jewish man she encountered on JWed. “We are now happily married for five years with two beautiful daughters. Thank G-d for JWed.”

JWed differentiates itself as a Jewish dating service for those exclusively Jewish and sincerely marriage-minded. Derek Saker said the purchase of SuperTova with over 20,000 members, was a natural acquisition. “SuperTova, like JWed, was also a pioneer. But its free dating model has become outdated in today’s online dating environment.”

Derek added that today’s sincere singles are looking for authenticity and quality members and have no hesitation in paying for a premium membership to ensure they are not wasting their time looking for their soulmate.

JWed focuses on helping Jewish singles who are ready for marriage. Many of its members are also eager to start a family. Derek said he is proud that the service is customer attentive and bears characteristics of a more traditional Jewish dating service than just another dating app.

“This is, in reality, a nice community dating service,” he said.“Our power is to enable Jewish singles, whether from large or small, isolated communities to meet Jewish singles from all over the world.”

The company has created a JWed app that works totally in sync with the website. In fact, Derek says more registrations come through the app than the website these days — though members can access the JWed service through either platform. Like the website,  the app enables users to create a free profile and — once approved — conduct searches and be listed on searches. Paid subscribers, identified with golden rings on the platform, can communicate with others through on-site messaging, instant messaging, icebreakers, and the site’s Forum.

According to one woman’s JWed review, paying for a one-month subscription made all the difference in her love life. She said, “Even though in the past I had never messaged a guy, I decided to take the plunge and just message him.”

The conversation was promising enough that they extended their chat on Whatsapp and eventually agreed to meet in New York for a first date. He had to fly in from Arizona for the day, but it ended up being well worth it because the couple fell head over heels. They are now married with two sons.

The JWed site creates an environment where singles can search for serious relationships. The platform encourages people to take their time and get to know their date prospects — and to give non-local matches a chance. Some dating apps limit matches based on geography, but Derek said it’s important for Jewish singles to be open-minded about meeting someone who lives further away.

“Over 70% of marriages have been between members out-of-state, city, or country,” he said. “We always tell members that, while geography is important, it should not be everything. Two people who find they share religious outlooks, common goals, and love each other’s personality and character attributes can overcome distance.”

A divorced woman in New York took a chance on a man whose JWed profile said he lived in Ohio. The couple exchanged emails, hit things off on Skype calls, and got engaged five months later. “We have been married for a year and a half, and I am grateful to JWed for my current situation,” the woman wrote in a testimonial. “I would never have met my husband from another state without JWed.”

Members of All Ages Can Find Love on the Platform

In the last year, Derek said he’d seen a dramatic upswing in the number of JWed members. He also said he has noticed increased signups among a growing number of younger singles between the ages of 20 and 30, who have yet to be married.

Those singles, who used to go out to nightclubs, bars, or networking events to connect with other Jewish singles, were left with few alternatives when the COVID-19 pandemic stopped everything in 2020. While they may have lagged in using the site, many people in that same demographic are now looking for a serious relationship online.

Derek said he’s also seen an increase in the number of older members — those in their 60s, 70s, and 80s. Most of these singles are getting back into the dating scene after a divorce or death of a spouse, and they need a helping hand they can trust.

Online dating can be invaluable to a single person who is ready and willing to put in the effort to make a match..

“No one wishes to be alone. And senior people have been acutely affected by the loneliness of COVID-19, unable to see family or friends,” he said. “Today, there is much more motivation and family support for an older parent to boldly venture to start a new chapter in their life and meet someone else.”

Of course, that can make it tricky for the JWed team to balance the technical demands of the younger generation with the simplicity yearned for by older members. Derek said the team works hard to avoid the dismissiveness that singles say they often experience on other dating platforms.

Sometimes JWed facilitates a bit of serendipity that grows into love. A woman named Sandra said the romance with her future husband rekindled when she accidentally clicked on his profile on night. “I was not above stalking, but I didn’t happen to be doing it at that very moment,” Sandra said.

Luckily, her man responded with grace, and they enjoyed a fresh start in a conversation that led to a heartwarming love story. They were married in June 2007.

JWed has built its collection of success stories by putting genuine relationships first. The site encourages its members to consider the many facets of a person — beyond whether they find a profile picture attractive — to improve the quality of the online dating experience. In addition to photos, profiles include personal descriptions, information on what the person is looking for, and Judaism’s role in their lives.

The team said JWed will soon launch a new feature to help spark connections between users. The site and app will include audio greetings, a feature that allows members to record a 60-second introduction in their own voice. It’s a great way to show authenticity and stand out from the swiping crowd.

JWed is also focused on the platform’s security and quickly weeds out scammers who try to slip through its process. Recently, the platform introduced new Know Your Customer (KYC) technology that is traditionally used in banking apps. JWed plans to use KYC to verify the identity of all future members with their passports or other government-issued identification. The software will ensure the face on the ID is the same as the user.

It’s part of JWed’s mission to give singles the opportunity to find love and build a family. Derek said he is proud of the progress the Jewish dating site has seen — and the difference it has made in thousands of people’s lives — but he knows there is still so much more work to be done.

“We’ve had good, strong growth, but it is, as always, competitive,” Derek said. “Singles are understandably always looking for something new to help them find their soulmate.”