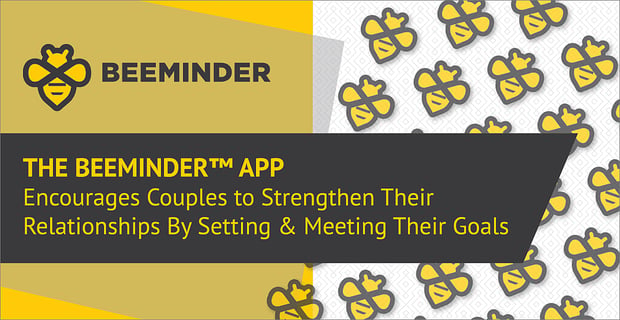 The Short Version: In 2010, married couple Daniel Reeves and Bethany Soule founded Beeminder to hack into people’s productivity and motivate them to achieve their goals. The app and website measure a user’s progress toward a customizable goal (i.e. going on one date a week) and then will take pledge money if the user “derails” from the program and fails to meet the goals they set for themselves. Goal-oriented singles and couples can use Beeminder’s helpful tools to improve the quality of their lives by sticking to their commitments.

Author Nick Winter wrote “Motivation Hacker” in 2013 to explore the attributes shared by self-motivated individuals and recommend shortcuts that could help readers do just about anything they set their minds to.

His highly motivated three-month regimen included learning over 3,000 Chinese words, training for a marathon, reading 20 books, increasing his bench press by 60 pounds, and going on 10 dates. All while writing a self-help book.

Nick accomplished a lot during this hyper-productive time in his life, and that experience drove him to continue setting lofty goals for himself. A few years back, he joined the Beeminder network to keep him on track as he pursued his personal and professional objectives.

A married couple founded Beeminder in 2010 as a motivational resource for goal setters.

Nick used Beeminder primarily as a tool to improve his relationship with his girlfriend at the time. He wanted to make one romantic gesture a week to show her how much he cared, so he used Beeminder’s website and app to ensure he followed through on his plans week after week. Beeminder collects data regarding specific goals and creates a graph to show the individual’s progress toward that goal.

Generally speaking, Nick’s task reminder was a pretty straightforward question — he either made a romantic gesture or he didn’t — but others have used the app to help them achieve more complicated and difficult goals, including losing weight, learning a language, and exercising more often.

The motivational goal-tracking system is versatile and can work for anyone interested in bettering themselves, their relationships, and their lives one data point at a time.

The Unique Pledge System is Flexible to Your Needs

The Beeminder system began as a pact between Daniel Reeves and Bethany Soule in 2005. Daniel was working on his Ph.D., and his girlfriend Bethany wanted to motivate him to finish his dissertation on time so she came up with the Voluntary Harassment Program. The program involved a series of monetary incentives that helped Daniel buckle down and graduate within the year.

A few years later, the couple applied their productivity schemes to other goals. They recruited friends to join them in losing weight and created graphs that would track each individual’s progress toward his or her ideal weight. To make things interesting, Bethany, Daniel, and their friends made a bet: Anyone who failed to meet their weight-loss goals had to pay the others. This bet motivated many of them to reach their goals.

Bethany and Daniel knew they were onto something, so they quit their day jobs in 2010 and founded Beeminder to offer their unique motivational process to the world.

The startup company’s playful name speaks to its ultimate mission to light a fire under its users. As the website says, “Beeminder reminds you and binds you. It’s Beeminder, the me-binder. It’s reminders with a sting. Mind your goals, and be minded.”

Bethany (aka Bee) is mindful of what people need to make progress in their lives and told us the Beeminder website and app offer a persistent yet friendly reminder for goal-setters of all backgrounds.

Users start out with no money at risk, but the pledge amounts increase as they fall short of their goals (they call it derailing). If you miss a week, your pledge for the next missed week is $5. If you miss again, it increases to $10, and then $30, until users feel motivated to stick to their goals. Users can set a cap on their pledges and schedule breaks as needed.

Beeminder automatically creates a graph that shows an individual’s progress and creates a projection of where he or she needs to stay (they call it the Yellow Brick Road) to meet the desired goal in the next few weeks. These goals can be anything quantifiable, and Bethany said she has seen couples use it to track how often they hugged one another or gave each other small gifts.

Partnering With Other Services to Track Your Progress

Beeminder has three premium plans, in addition to the free Core Beeminder plan, to give users an added bang for their buck. Premium features include the ability to give pledge money to a favorite charity or remove pledges altogether. Bethany told us the premium features include some great perks, but users don’t need them to accomplish their goals.

“You can be successful with the core plan,” she said, “but the premium plans are a bit more powerful.”

Beeminder can draw information from its partners to track a user’s progress toward set goals.

If you want to track your steps, for instance, Beeminder can pull data from your FitBit and create a graph without you having to do anything. This allows the app to hold users accountable and create a clear picture of their progress toward a particular goal.

Looking to the future, Daniel and Bethany said they want to continue steadily adding partners and making improvements to the app’s interface. They also plan to grow their remote team of developers as Beeminder gains traction in the mobile space.

“Beeminder is a powerful tool, and we’re working on making it more user-friendly,” Daniel said. “Right now we’re popular in the quantified-self community, and we have the potential to grow in other spaces as well.”

Serious, Commitment-Oriented People Benefit the Most

Joining Beeminder and creating a goal is completely free. As long as you check in and stay on track, you need not give any money. However, users must provide a credit card number upon sign up, and they will be charged if they wander off the Yellow Brick Road. They can also upgrade to premium accounts to create more than three goals and get other perks.

Beeminder users tend to be highly intellectual and curious individuals who appreciate the app’s data-driven approach.

Daniel said the most successful users tend to be highly disciplined and determined individuals. Many of them compare stories and offer tips in the Beeminder Forum. They are serious about their goals and use the Beeminder app and community to hold themselves accountable.

Over the years, Beeminder has facilitated many life-changing stories, and its testimonials page speaks to its tremendous impact on different areas of life. People have improved their health by losing weight, they’ve repaired their relationships by spending time together, and they’ve bettered themselves by measuring their actions and modifying their daily habits.

“I’ve used Beeminder for weight loss, exercise, time management, and job hunt goals,” said David MacFarlane. “It brings an immediate discipline to all of these and keeps me from lying to myself that it’s OK to let today slide.”

“People who are persistent tend to love it,” Daniel said. “Our community attracts the kind of person who has a concrete goal and wants to do it — they just need that extra kick in the pants to make it happen.”

Whether you’re on a mission to lose weight, write a novel, or get in a relationship, you can use Beeminder to motivate yourself using a combination of friendly reminders and monetary consequences.

Danny and Bethany have spent years perfecting Beeminder’s incentive process and applying their knowledge of human psychology and game theory to help motivate people working to achieve a variety of goals. If you’re tired of falling short of your New Years’ resolutions, join the Beeminder network and give yourself a “safety rope for slippery slopes.”

Nick used Beeminder to strengthen his relationship, and his short-term goals paid dividends in the long run. He and his then-girlfriend are now happily married with two children.

Beeminder can help couples work on their relationships, and it can be a wingman for singles seeking a more active love life. You can set goals to approach at least two people per day on the weekends or ask for one phone number a week. These dating-related goals can push singles to overcome their fear of rejection and gain confidence in themselves.

“Beeminder can help motivate singles to take action and expand their comfort zones,” Bethany said. “If you’re nervous to talk to people you don’t know, it’s a good thing to practice and take risks until you successfully find a relationship.”