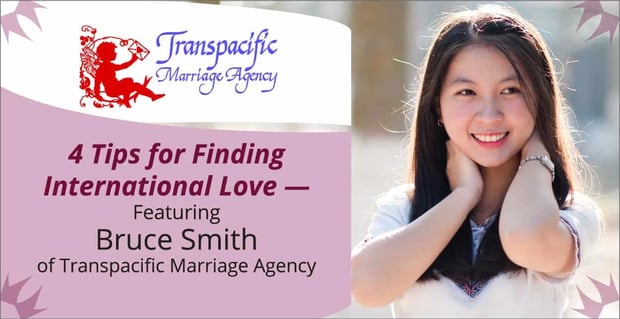 The Short Version: Singles often have questions about how to look outside of their geographic region for a long-term, meaningful relationship. That’s where the Transpacific Marriage Agency comes in to help. Founder Bruce Smith has plenty of advice for Western men who want to connect with Japanese women (and vice versa). Over the last 27 years, TMA has facilitated over 10,000 marriages, and 40% of its clients get married within the first 18 months. Bruce understands the challenges faced by couples in international relationships, especially during a pandemic, but a few expert tips can ease the search for love.

If you have a few preconceived notions of what an American man is like — or what a Japanese woman is like — you’re not alone. Bruce Smith, Founder of the Transpacific Marriage Agency (TMA), has heard just about every assumption and stereotype before because he works in the international dating industry. His job is to connect men and women from across borders and cultural divides.

“People have presumptions and assumptions, and we have to educate them. When people join the agency,” Bruce told us. “They’ve gotten to the point that they need to find something different than what their current environment provides, and a lot of that rests on their presumptions about what people in the other cultures are like.”

Bruce has helped advise singles and facilitate relationships for 27 years. A significant part of his job is educating clients on the realities of cultural differences, international love, and human nature. He teaches people that relationship success doesn’t have to do with where people are from. Instead it depends on shared values and healthy communication.

Since he founded the TMA in 1994, he has seen clients matched in about 10,000 marriages around the world. Even more impressive, he says that less than a dozen have reported back that they had gotten divorced, and most of those also came back for a new TMA membership.

The international marriage agency’s client-first policy means that TMA will tell potential members if its services aren’t right for them. Bruce wants to set his clients up for success, and he doesn’t sugarcoat the challenging aspects, particularly during a global pandemic when travel restrictions can be a factor.

“There are some hurdles that people need to overcome when they’re pursuing an international relationship,” he said. “It’s hard enough when you live in the same town, but when you live halfway around the globe, speak different languages, and have different cultures and expectations, there are a lot of additional challenges.”

Getting help to overcome those cultural hurdles — as well as the legal barriers — can mean the difference between a failed relationship and a marriage that lasts a lifetime. That’s why Bruce gave us some of his tips from his years of experience in this industry.

1. Understand Your Potential Partner Has a Different Perspective

A lot of the beauty and the richness comes with the Japanese culture, and Bruce has seen that firsthand after having lived in Japan for many years. He’s also lived in South America, Central America, and the Middle East, so he’s familiar with many cultural norms and values around the world.

“I am interested in people, cultures, and creating structures that break down barriers between others. When you cut through all the misinformation, the same wants and desires generally drive people around the world,” he said. “Our job is to help people make that less rigid.”

When it comes to connecting Japanese women and Western men, Bruce said his team spends a lot of time translating Japanese culture into the Western viewpoint and vice versa. Both individuals have to be in a place of undersanding differences if they’re going to make a relationship work.

“They’re not right or wrong, but it’s an educational process. We include information that we’ve learned over the years that drives interests of those seeking international love,” he told us.

Bruce said many clients come to him with a laundry list of demands for what they want in the perfect partner. One of his first pieces of advice is to let go of those demands.

“When they finally find someone and decide to get married, only a few of those items on the list are still important. Chemistry gets involved, and there are many things they didn’t think about when they made that list,” he said.

Part of the TMA’s role as an international matchmaker is to help people get real. Clients may say they want all these superficial things, but what they really want is a great relationship, love, and a family. Those are shared values. As Bruce said, “If you come in with ‘I want. I want. I want,’ it’s not a good formula for a relationship.”

“The key to all relationships is communication.” — Bruce Smith, Founder of TMA

Clients who sign up with the Transpacific Marriage Agency get some assurances upfront that other members of the site are legitimately looking for long-term relationships. All clients undergo a background check to ensure they’re legally available to marry another person.

If a potential client is separated but not divorced, they must present a divorce certificate before they can sign up with the agency.

3. Work On Your Communication Skills

Bruce encourages his clients to learn good communication skills because he said they’re vital to a successful relationship. Since not all communication is verbal, Bruce also encourages people to pay attention to body language and be considerate of others.

“No one is going to marry someone without connecting and seeing if they have similar values. The key to all relationships is communication, whether verbal and non-verbal,” Bruce said. “Sometimes it doesn’t work because people are thinking of themselves rather than the other person — or ‘me’ rather than ‘we.’ Part of our service is to help people see that it’s not all about them.”

Of course, communication also comes with understanding cultural differences. Thanks to movies and the media, people in both Japan and the West have ideas about each other that may not be correct. That’s why it’s all the more important to communicate clearly.

“For example, Japan is a very male-dominated society, and many women think that a non-Japanese man would be more liberal,” Bruce said. “What they find is some truth and some falseness to that thinking. Our job is to help educate people about the reality. It’s all about relationships, communication, and shared values.”

Bruce wants to help relationships grow as organically as possible, even if the matches are across the globe. He offers practical advice and guidance to clients so they are prepared for the challenges they face. That’s been particularly important over the last few years as the coronavirus pandemic has left some singles feeling isolated.

There is still hope though. The TMA has continued to make matches and facilitate international love despite the restrictions imposed on travel. Bruce said the company’s marriage success rate hasn’t gone down significantly during COVID.

4. Make Sure Your Finances, Career & Life Are in Order

Bruce’s agency has been successful in connecting people for lifelong love by helping them overcome cultural hurdles. But clients also need to come to the agency with their personal lives in order.

“If you’re looking to marry someone who’s thousands of miles away, certain things become important quickly. First, you have to be financially stable. You don’t need a million dollars, but, if you’re unemployed, your chances of finding love are also going to be poor,” Bruce said. “I don’t want to take money to help someone when they have other important challenges to deal with.”

With clients in more than 60 countries, the agency doesn’t discriminate, but Bruce and his team try to provide people with realistic ideas of what they can expect in an international relationship.

“We let people know what their chances are. In every culture, some people aren’t nice, so some Western guys don’t meet our cut,” he said. “But that’s why we do background checks on all our clients. We have to look out for what’s best for our members.”

Of the nearly 10,000 marriages the Transpacific Marriage Agency has fostered, about 40% of those clients got married within 18 months. At the 30-month mark, the number of married clients climbs to 60%.

Bruce credits his tremendous success to the fact that the agency doesn’t rely on an online search system. Instead, it focuses on making connections the old-fashioned way: find partners who share similar values.

That approach has worked well for Bruce. And it’s not the only thing that makes TMA stand out from other international marriage agencies. For instance, both men and women pay for TMA’s services. Some companies require just the men to pay, which Bruce said doesn’t work well when it comes to facilitating a healthy, long-lasting marriage.

Just remember, marriage isn’t all about initial attraction or a list of traits you want in another person. It’s about merging two lives into one harmonious union through shared interests and experiences.

“Things that aren’t really at the front of your mind at the beginning become more important over time. Politics, religion, family lifestyle, diet, health — and a whole list of other things come into the equation when you have a long-term relationship and marriage,” Bruce told us. “You have to be able to get along. If you don’t, you’re going to have a much harder time having a successful relationship.”