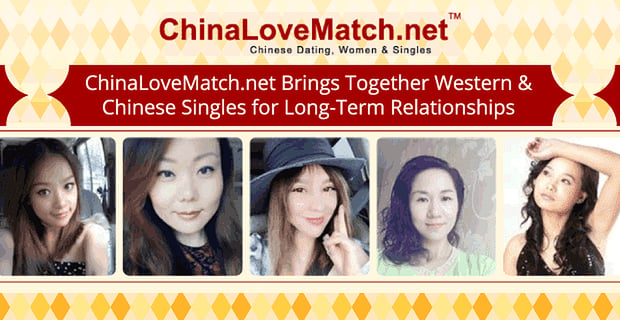 The Short Version: The primary mission of ChinaLoveMatch.net is to help Western men and Chinese women find quality relationships — the kind that could end in marriage. John Abbot and his Chinese-born wife created the platform because they were brought together, in part, through online dating. ChinaLoveMatch has become a popular destination for singles focused on the long term and includes a forum and blog where users can receive — and provide — valuable advice. The platform has protocols in place to help keep encounters secure and plans to expand the business to include cross-cultural dating between other nationalities.

ChinaLoveMatch.net began with a chance encounter between Canadian John Abbot and a Chinese woman at a Hong Kong airport years ago. Over drinks in the lounge, they struck up a conversation and, after chatting for a while, they discovered they were both members of the same popular dating website.

After returning to their respective hometowns, they connected on that website, continued their conversation, and a romance ensued. A few years later, they were married. One day, the happy couple was discussing the dating platform they met on, as well as others in the industry.

They identified plenty of areas for improvement, especially for fostering a relationship similar to theirs. So they decided to use their experience to make a better platform.

”Looking for something fun to do together, we decided to start a better Chinese dating site,” John said. “We also wanted to create one that was vigilant about keeping the scammers away, kept the members real, and was transparent in every way.”

That’s just what they did with ChinaLoveMatch.net.

ChinaLoveMatch.net was built to connect Western singles with Eastern daters.

Now co-owners of the site, John and his wife devote their time to building and maintaining a platform that helps other singles find the same type of lasting love they did.

New users can apply for a free account in minutes, and applications are approved or denied within 24 hours. Applicants deemed suspicious or fraudulent are rejected. The site is open to men and women from around the globe, and most members are Western men or Chinese women.

“Because we are strictly for long-term relationship daters, our age range is a little older than some other sites,” said John. “Chinese women are culturally very marriage-minded, so the women on our site who are seeking serious relationships generally start at 21 years old, while our men typically start around 25.”

However, both genders and cultures have members on the site who are in their 70s, many of whom are seeking a relationship later in life or after a previous one has ended.

“In just over 10 years, we’ve signed up about 260,000 members and maintained an even balance of males to females,” John said. “We take great pride in the fact that, unlike most cross-cultural dating sites, we have never posted a fake member in 10-plus years — and we never will. All of our members are real.”

ChinaLoveMatch.net has a small but dedicated team of employees working from locations around the world.

“Our team is not large, but it is very talented, and we love doing what we do,” said John. In addition to John and his wife, the company employs a developer, a Chinese manager who handles customer service for Chinese members, two part-time writers, and a handful of virtual assistants.

In addition to the employees in China, the site has others from Britain and the Philippines. The team members all work together remotely to make sure the site runs smoothly and provides members with useful information in a friendly, safe environment.

“We have active blogs that offer quality advice to members written by people who have experience with online Chinese dating,” said John. “Additionally, many of the bloggers are either Chinese women or Western men who have lived and worked in China.”

The active forums allow members to communicate with each other to help solve problems. John said that common topics address the obstacles encountered while seeking cross-cultural relationships online.

Through the blog posts and the forum, members have plenty of opportunities for interaction, which makes ChinaLoveMatch.net more like a community than just a dating site. Many friendships blossom and some evolve into relationships that lead to marriage.

“Some of our best Success Stories are members who met on the forum and then looked up each other’s profile and start to date,” said John. “Likewise, a number of our bloggers are now married to members who initially got to know them through their blogs.”

While every story is a great success, John said that one in particular not only brought two people together but served to help erase a common bias from the site.

“We brought together one of our best bloggers, who is African-American, and his lovely Chinese wife. We take a lot of pride in that union because, when we started out, there was a clear bias in Chinese women against men of color.”

John decided to help alter that sentiment by showing female users that those thoughts were unfair and unnecessary. Part of that was introducing them to an African-American blogger and having them get to know him.

“After a few months of him blogging, that prejudice, which is strong in the general Chinese culture, disappeared from our site,” he said.

The online dating world is rife with scammers who want to make some quick money, not put in the time to find a relationship. One way that ChinaLoveMatch.net sets itself apart from other sites like it is by using robust features to help deter and combat scammers.

Scammer Prison™ allows members to see which users have been caught engaging in suspicious activities on the site. Those activities include anything from asking members for money to soliciting their services as visa agents. Once a scammer is “convicted,” his or her profile picture is altered to include a set of prison bars. That strategy creates a memorable visual so if that member sends you a message, you can recognize them as an offender.

Another feature is the ability to check the other user’s IP address and report any suspicious inconsistencies. For example, if a man says that he’s in America, but his IP address shows that he’s in Germany, that would be a red flag. It’s possible that he’s logging in while on a business trip, so when a member is reported, the ChinaLoveMatch.net team investigates the account to see if the user will be sentenced to Scammer Prison.

The combination of these features has worked well to keep the site safe, and, because of that vigilance, users trust in the matches they make on the site.

“We take great pride in the fact that, in 10 years of operation, fewer than a handful of people have been scammed, and very little money has been lost,” John said.

When John Abbot met his wife, Western men meeting Eastern women on dating sites was less common. Today, thanks in part to ChinaLoveMatch.net, those singles meeting online is more mainstream.

John Abbot and his wife developed ChinaLoveMatch.net to give others the chance to find love like they did.

The opposite pairing isn’t as prevalent. But in recent years, there’s been a growing interest among Western women in dating Chinese men, and ChinaLoveMatch.net also caters to that niche.

In addition to that flip side of its primary clientele, the site is looking to expand beyond catering to people looking for Western-Chinese relationships.

“We hope to take the success we’ve had in these two niches and expand them into all of the other niches in international dating,” John said.

As the platform ventures into content changes, it will also update the site’s appearance and functionality. John said the company is starting to rebuild our website to a format similar to a social network. The change will increase user engagement and provide a fresh, up-to-date look.

When John and his wife set out to create China Love Match, they wanted a safe place for daters of different cultures to find a love that they’d found with each other.

“We are very proud to have helped many people do just that,” he said.