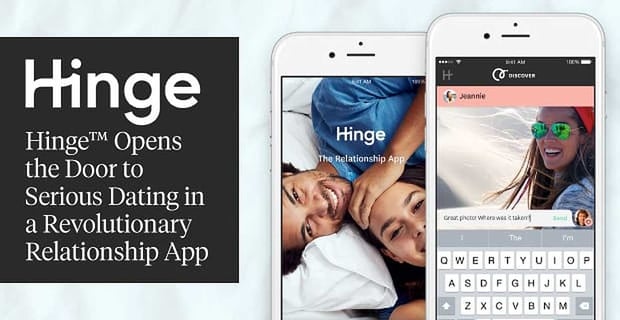 The Short Version: For all the singles tired of ghosting, swiping, and wasting time on shallow dating apps, Hinge offers an innovative and effective solution. Hinge isn’t a dating app; it’s a relationship app. Users on the platform connect on a deeper level and build lasting bonds. The social-based communication tools provide a natural way for singles to break the ice and chat with someone based on shared interests. Dispensing with superficial profiles with little more than a photo, Hinge created a social newsfeed where users can comment on photos, videos, and prompts to start a conversation. For $7 month, premium members can engage with one another in a community designed to serve relationship-minded singles in their 20s and 30s. If you’re looking for a real connection, a serious relationship, or a deep conversation, you can download Hinge on iTunes or Google Play and join the serious dating revolution.

Fast-moving Tinder-style dating apps treat dating like it’s a game of musical chairs. Hasty singles go round and round trying to win by covering the most ground. Today’s casual dating culture encourages daters to make a date, move on, find another date, and keep swiping in an endless looping carousel. It’s all fun and games until the music stops and some poor saps are left standing all alone, wondering where all their dating options of the past went.

Finding someone to share your life with isn’t a game. And yet so many of today’s dating apps leave singles rushing around in a chaotic scramble for any seat available. The problem is the objective of such apps is to pair users up quickly, not permanently.

Hinge’s relationship app gets rid of swiping in favor of more unconventional and engaging communication tools.

Hinge takes issue with the meaningless dating culture perpetuated by knee-jerk swiping and superficial matching. In the early iterations of the Hinge dating app, the team saw how ineffectual photo-based judgments could be in terms of facilitating genuine connections.

“[Users] were swiping more than ever, but only 15% of those were leading to conversations,” said Katie Hunt, Chief Brand Officer at Hinge, in a Bustle interview. The Hinge team believed dating could be about so much more than swiping, so they developed a groundbreaking relationship-focused app for singles seeking real connections with down-to-earth people.

Hinge aims to attract millennials who are tired of superficial dating apps and want a more meaningful dating experience. Bucking the status quo of casual dating apps for young singles and commitment-focused dating platforms for older singles, Hinge’s relationship app targets singles between the ages of 25 and 35. Because mature daters aren’t the only ones interested in finding love!

In 2016, Hinge situated itself as the go-to relationship platform for young daters. After spending a lot of time thinking about and discussing what makes a dating platform successful, the Hinge team overhauled its former setup and created a one-of-a-kind app to facilitate deep connections from any mobile device.

The update included moving away from free communication features toward a paid app. Today, Hinge’s new membership plans cost only a few dollars a month and includes unlimited likes and advanced search filters. The price is meant to weed out flaky casual daters, ensuring that everyone signed up as a full member is serious about dating for keeps.

“Inspired by love, and guided by authenticity, Hinge creates meaningful connections among those bold enough to seek real relationships,” according to the Hinge team’s mission statement.

Singles can sign up to Hinge for free using their Facebook accounts, which makes the profile setup easy and also automatically verifies the authenticity of a new user. The intuitive design works like your favorite social media pages. Your profile — called Your Story — offers open-ended prompts like “What are you reading?” and “A fact about me that surprises people.” Such in-depth questions fuel conversations because instead of private messaging someone, Hinge users like or comment on any of the content in Your Story.

Free members can send up to 10 likes per day and filter date prospects by height, religion, and ethnicity. As a Preferred Member, Hinge users have even more options to target the type of person they’re interest in. For just $7 a month, chatty singles enjoy unlimited likes and comments, which stimulates connections on any mobile device.

On Hinge, you can make honest connections based on more than what someone looks like.

“Because you have to interact with someone’s profile before a two-way conversation opens up, there is no room for copy-and-pasted lines,” noted Michelle Toglia, a Hinge beta user and writer on Bustle. “I found it much easier to have conversations, and not one of them involved the usual ‘Hey, how’s it going?'”

“The matching and conversations are much better than other apps,” wrote beta tester Mike Davis about the Android version of Hinge. “This gives everyone the gentle nudge and icebreakers to get going. A step above the rest!”

Another key feature of the relationship app is the addition of video content to show snippets of your daily life and adventures. According to Vice President of Member Experience Tim MacGougan, videos serve a vital purpose on the app by giving “users a good feel for what it might be like to go on a date with someone.” Videos reveal more about a date prospect’s personality and give more room for silliness, creativity, and engagement.

Whether you’re hoping to get more likes or second dates, Hinge’s team can point you in the right direction with data-driven dating advice. Hinge Reports compile interesting stats on the app and give daters insight on answer prompts with the most likes and most and least successful date locales. The blog gives singles a space to pull back the curtain on mobile dating interactions and learn how to successfully attract eligible dates.

“The new Hinge is redesigned for relationships,” according to the website. “It’s a members-only community for people looking to get past the games and find something real.”

Inspiring Genuine Connections Between Millennials Since 2011

Hinge has claimed new territory in the dating scene and created a niche for serious daters in their 20s and 30s. Hinge’s relationship-geared take on mobile dating has gained traction among young singles interested in long-term love. According to internal stats, 85% of users remain active one week after joining, and 75% are active on the app one month after joining.

Reviews of the redesign have been largely positive as well. “Seriously the best app out there right now. Adding video was SO clutch. Also the quality of guys is so much better than on other apps. Hinge is a total game changer!” Siracha898 wrote in an iTunes customer review titled “Yaasss Hinge.”

“The people I’m matching with are much more serious about a relationship than the other apps. Keep up the great work!” –Zeedee0676, a Hinge user

In 2013, Hinge supported a community of over 60,000 users. In 2016, the team decided to push the boundaries of what an app could do by giving users even more social-driven dating tools designed to help people form deep and lasting relationships. “By introducing trust and transparency through social, Hinge is shaking up the dating landscape,” according to the website, “and has attracted over $20 million in funding from investors.”

The team’s fearless leader, CEO Justin McCleod sees enormous potential for growth in the coming months and years. “As long as there are single people in the world, they’ll come to Hinge,” he said to TechCrunch.

A Gutsy Team of Idealists Shape the Future of Serious Dating

As with any tech startup these days, Hinge’s company culture is fun-loving and innovative, with plenty of space for open collaboration between forward-thinking team members. Salaries are transparent, and team members bond at company-sponsored social events. A majority of the company’s experienced engineers come from work backgrounds at Google, Amazon, Spotify, Etsy, Meetup, and other big names in the tech world.

“This job has me excited to get out of bed in every morning,” wrote an IOS engineer working for Hinge in the New York offices. “The company is full of bright, hardworking people.”

According to the company culture webpage, “We build products for humans, by humans, and always with the utmost respect for our members and their experience.”

Justin McLeod, Hinge CEO and Founder, has raised over $20 million for his tech startup.

The story of Hinge’s development began by listening to what users wanted and imagining how an app could solve a fundamental problem in the dating culture. Fresh from Harvard Business School, Hinge Co-Founder Justin McLeon envisioned a dating app that connects you with friends of friends, creating a natural and trustworthy dating experience.

When the startup built the first version of Hinge in 2011, the unique dating app had a broad appeal, but the tools didn’t prove effective for most daters.

“The whole thing was designed around matching you with more and more people,” CEO Justin McLeod said about the original design. “No one’s really invested in the experience, people are flaky, [and] they’re there for all kinds of reasons.”

“For our team, it became impossible to ignore that we’re no longer living up to our mission and that we were a part of something that we didn’t like and didn’t want in the world,” Katie told Bustle. “We wanted to be relationship-oriented and be something that really connected people in a digital space.”

The Hinge team took a risk and decided to scrap the app’s original design, starting over from scratch with the goal of creating the first relationship app for young daters. There isn’t a schematic for what they’re doing now. Hinge’s optimistic team is pioneering an uncharted space in the dating world and hoping singles will see the value in what they offer.

“What we wanted to do was create that same dynamic where everyone is invested in the experience,” Josh said in a TechCrunch interview, “but we didn’t want to make it so expensive that it becomes this niche thing.”

Since its redesign, Hinge has made a huge splash in the dating industry. Thousands of curious singles have downloaded the app and paid for a premium membership plan in hopes of a more refined mobile dating experience — and Hinge lives up to its hype. The app’s social tools drive conversations about interests, experiences, and opinions. Currently, Hinge matches its users up in more than 50,000 dates and 3,000 new relationships each week.

Hinge is the world’s first relationship app. The platform empowers and supports a generation of  tech-savvy singles worn out by the mad rush to find a partner before the music stops.

“I think we’ve lost reality over what it means to be a bold person and say what you’re looking for — and there’s so much power in that,” said Katie. “My hope is that it’ll allow millennial women who want relationships to actually put a stake in the ground and say ‘This is what I want, this is the type of treatment I want, and this is what I expect.'”