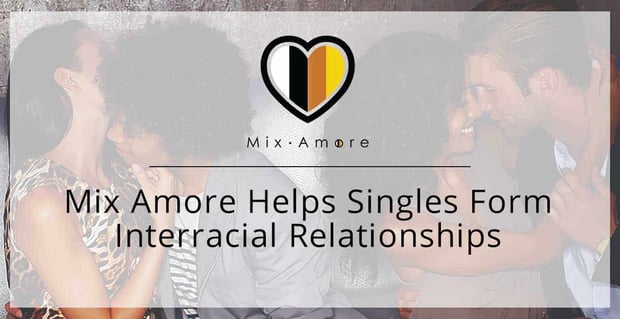 The Short Version: Mix Amore is a popular dating app that invites a diverse mix of singles to create multicultural and interracial relationships. The app’s live chat and video features help people get to know one another and create bonds that are more than skin deep. Singles can download Mix Amore for free in the App Store or on Google Play and discover a world of romantic possibilities is within their reach.

I’m a sucker for a good romantic reality television show, so when I heard the premise of “Bride & Prejudice” — which follows engaged couples whose families disapprove of their union — I was all in and ready to binge watch the whole series.

Even though I’ve seen a lot of reality show drama in my day, I wasn’t prepared for the vitriol and ignorance of some families. An interracial couple in Texas tried several times to win over their family members with no luck. “I don’t like him because he’s white,” the bride-to-be’s cousin said. “Stick to your own.”

Mix Amore encourages singles of all races to meet one another and mix things up.

These two star-crossed lovers came from two different worlds, but their love helped them bridge the divide. What’s even more remarkable about this interracial couple’s story is that they never would’ve met had it not been for a dating site.

Online dating platforms have the power to broaden people’s horizons and bring more love into the world. Mix Amore has taken that mandate to heart and created a dynamic place to diversify your date list.

As an interracial dating app, Mix Amore is on a mission to help men and women of all races, cultures, orientations, and backgrounds find common ground and build meaningful relationships.

“Interracial dating is not as black and white as you may think,” the team said. “Welcome to Mix Amore, the most exciting interracial and multicultural dating app for singles who are open-minded to finding love.”

Online dating sites and apps have the power to connect people who may never have met otherwise, and that has been a game changer in the social scene. Some studies have linked online dating to a rise in interracial marriage in the U.S., and Mix Amore aims to be at the forefront of this movement.

For the last few years, Mix Amore has promoted interracial dating and matching features that put Asian, Hispanic, Black, White, and biracial singles in the same space. There are search filters by ethnicity, but users can indicate that they’re open to dating any race to maximize their match potential.

It’s free to download Mix Amore and browse the database to see the romantic options it has to offer. The app uses traditional search and swiping tools to make online introductions, and premium app users can use the real-time messaging and video chatting features to build on their online connection.

On the surface, Mix Amore may seem like a run-of-the-mill swiping app, but its match algorithm digs a little deeper to make sure couples fit each other’s lifestyle. The matchmaking formula takes a person’s age, location, body type, appearance, and social media habits into account when suggesting compatible matches.

Mix Amore users can disclose how much time they typically spend on social media, and that data will be displayed on their dating profile and factored into their match ratings. This unique feature can help mitigate a major source of conflict in relationships by ensuring both individuals are on the same page when it comes to social media.

“We have implemented something very exclusive to our dating algorithm that incorporates social media usage,” the Mix Amore team explains. “It’s used in compatibility scoring.”

Mix Amore offers an intuitive and easy online dating experience for singles willing to go outside their comfort zones to meet their perfect match. Countless international friendships and interracial relationships have already sprung from this matchmaking system, and the Mix Amore brand continues to grow in the U.S. and beyond.

Boasting a 4.6-Star Rating in the App Store

Mix Amore offers a variety of matching features to help individuals search for date prospects beyond their own social circle or city limits. The app offers a combination of local dating and international dating to help create special connections between people who want the same things and are willing to go the distance to reach their relationship goals.

The Hot List of profiles on Mix Amore has kept users engaged in the search for love, and the app has seen rave reviews from all corners as a result.

“What I like most about Mix Amore is proximity matching,” said Hayden W. “I can get access to many people near me and easily arrange a meeting.”

“It works in such a way as to make the app a great experience,” another Mix Amore user said. “I think this is the future of social media.”

“I love it,” said an iOS user named Adam, who said he met many friendly people on Mix Amore. “It’s very amazing, and thank you so much for this app.”

One Google user said the Mix Amore app helped him get through a rough divorce. “This app literally saved my life,” the review said. “Many of these people [helped] bring me out of my funk at that time. I’ve made many great friends here and hope to find love here.”

Mix Amore has a lot of praiseworthy features that streamline the online matching process, but it’s the people on the app that truly make it great. The app’s diverse audience makes it stand out because it can appeal to single people of every skin color, nationality, and cultural background.

“It’s lots of fun, and you can meet people from all over the world,” Edvin boasted in his testimonial. “It’s a great app, and I’m really happy to be introduced to it.”

Love is Colorblind on Mix Amore

“Bride & Prejudice” does a good job at highlighting the challenges that interracial and interreligious couples can face, and it poses the question: Can love truly conquer all? Many of its couples show that it can with enough patience, compassion, and inner strength.

Mix Amore celebrates the beauty of interracial relationships and helps daters find those opportunities to grow and learn together. This app has created many matches that cross cultures and borders to get to the root of what makes love last.

Looking to the future, the Mix Amore team intends to expand in Colombia, Venezuela, Brazil, and the Philippines with a focus on international dating.

“I am personally trying to open doors for those around the world, and especially in South America,” said the Mix Amore founder. “We see a growing interest in multicultural relationships led by Mix Amore.”