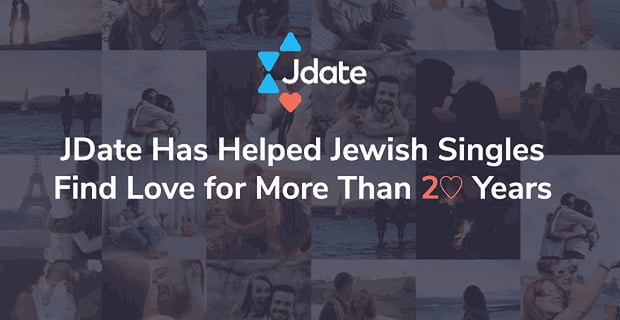 The Short Version: Many Jewish couples have JDate.com to thank for their happy relationships. The site has focused on using proven methods to connect Jewish singles for more than 20 years. The platform is moving forward with fun new outreach campaigns and backend improvements to add functionality and features for its users. JDate is on a mission to give all Jewish singles a chance to find long-lasting love with someone who shares their faith and interests. With online dating becoming ever more popular, new generations of Jewish singles are flocking to one of the original faith-based platforms to find a partner — and start a family.

My former co-worker Justin was a funny guy with a quick smile. He was also smart, successful, hard-working, and kind. However, because he was Jewish, and the small town we lived in lacked a sizeable Jewish community, he was having trouble finding a woman who shared his interests, culture, and values.

Instead of resigning himself to loneliness, Justin proactively signed up for JDate.com, a dating site designed specifically for Jewish singles.

David Yarus, JDate’s Director of Brand Marketing, spoke with us about the site’s role in Jewish dating over the last 20 years.

Fast-forward seven years, Justin is married to a beautiful woman, and they have two adorable daughters. His Instagram page is full of pictures of his family, and often I see him smiling wider than I remember him ever doing while he was single.

For more than two decades, JDate has played the role of matchmaker in countless Jewish communities around the globe. When single men and women of faith are ready to find love in a meaningful way, they can create a profile with information on themselves, their beliefs, and their passions. The site fosters connections on a deeper level than simply physical attraction, although that is still needed to form lasting relationships.

At a time when online dating has become more mainstream, JDate still offers quality over quantity.

“Any individual using a dating app has practically unlimited options,” said David Yarus, JDate’s Director of Brand Marketing. “But it also challenges the paradox of choice. With so many options, it’s harder for people to choose. I’m a big believer that it’s on us not just to help people find more people but also provide tools, content, and services that help them date more.”

JDate’s mission goes beyond helping Jewish singles find someone. The site wants to foster more profound love and deeper connections by pairing users based on compatibility and faith.

As the world’s largest network of Jewish singles, JDate is hardly a secret. It’s been around since 1997 and has more than 750,000 members in the US alone. In 2014, the company debuted a highly successful mobile app. The site also logs more than 2 million monthly views, making it, by far, the most popular dating site for Jewish men and women.

Once users sign up for the site, they have access to unlimited profile and photo browsing. A curated list highlights new users and profiles of people who may be good matches for you, as well as users who are located nearby. There’s also a “Lookbook” feature that shows users profiles one at a time, to see if any connections jump out. If not, you simply pass and keep looking.

JDate’s features help it attract even the most discerning Jewish daters.

Users can upgrade to a subscription at any time, which will allow them to send and receive messages on the site. And premium package members have access to even more features, such as the ability to see who’s liked and viewed their profile, as well as receive notifications when someone reads one of your messages.

JDate is also proactive with technology, even acquiring forward-thinking companies and technologies that help the platform accomplish its mission.

“About two years ago, we acquired JSwipe, which was an important piece of the mix as the largest Jewish dating app,” David said. “Together we’re doubling down on creating a robust highly engaged Jewish dating suite of tools. Over the last two years, we’ve integrated both teams and started building out road maps to connect the two communities and platforms.”

Even though JDate has seen plenty of success with users in the past, it is always looking to the future, and its team has launched new outreach campaigns to draw in new members.

One fun campaign is called “Powered By Yentas,” and it features lovable Jewish grandmothers who are always trying to hook singles up. They ask questions that are well known to many Jewish daters, like “When are you going to find that special someone so you can start having some babies already?”

The Powered by Yentas campaign is a humorous take on JDate’s matchmaking process.

“We searched for the most notorious yentas, the lovely Jewish grandmas from all around the US, but specifically the Tri-state area,” David said. “We hired yentas for 50 billboards around New York and created digital content, recorded them telling their love stories, and sharing their dating advice and holiday recipes.”

Another campaign includes JDate highlighting “20 Years of Love.” In this campaign, the platform showcases success stories from its two-decade history.

“We’re celebrating the love stories we have helped write from around the world. The individuals, the couples, the love, the magic, and the romance,” David said. “These stories have taken place in every Jewish community across the world over the last 20 years.”

When you log on to JDate, you can also visit JLife, which is a robust blog featuring articles on Jewish culture and dating, as well as stories from users. If you need tips on how to bounce back from online dating mistakes, or whether it’s a good idea to invite a date to your family Seder, you can find a post to help.

JDate has been revamping its social media presence, as well. The site now has a dedicated social media team that creates engaging content. This strategy helps draw in younger members who rely on those channels for information and advice.

Jewish singles can find advice on many different subjects through Jlife.

Another way JDate is reaching out to new members is by forming partnerships with local organizations.

“We’re building local relationships in different communities across the globe. We want to be the premier Jewish dating platform and community, but we also want to play a meaningful role in the local communities we serve,” David said.

JDate is Building Its Team to Help More Singles Connect

Much of JDates recent upgrades have been on the technology side, so JDate has been building the foundation for adding a host of new features, David said.

“Over the last year, our goal has been to create new and exciting features and do it effectively and efficiently,” he said. “On the front end, there aren’t a lot of new pieces, but, on the back end, our team has been working days and nights. We are both building interesting new features and transitioning on to a new platform.”

The team gets its motivation from helping Jewish singles find their own success stories — just like my friend Justin.

“Every day when we get new stories in, it ignites and renews our passion for what we’re doing,” David said. “When we hear the stories of people we’ve helped find love and start families, it’s powerful.”