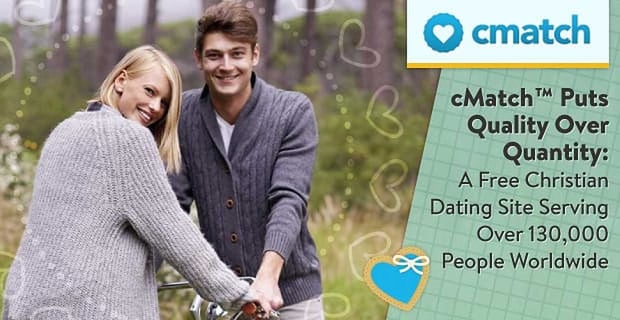 The Short Version: A Christian-owned dating site, cMatch is at the forefront of values-based dating for an international community of singles. Over 130,000 Christians have joined the network so far, and cMatch currently features more than 10,000 active profiles made by relationship-oriented men and women. With exhaustively vetted profiles, a clutter-free inbox, and a proprietary matching algorithm, the site upholds Christian values in every aspect of their business model. Since 2006, cMatch has promised singles a safe haven to connect with like-minded people from around the world. Singles of all Christian denominations are welcome to join cMatch for free and enjoy the fellowship of a genuine dating site.

Living in the Netherlands in the late ’90s, Chris Algra was underwhelmed by the online dating options for single Christians in Europe — they were too scarce and too generic — so he decided to join a dating site for Christians in the U.S.

“Surprisingly, it had a very international audience,” he said. “I was hooked instantly — the excitement of hearing the ‘ping’ of a new received message, the browsing of profiles, but also the discovery of new cultures.”

Chris Algra, Founder of cMatch, stays true to his audience of Christian singles as he runs the site.

Chris soon found himself having profound discussions with faith-oriented people in a global community, and he wanted to share the joy with other Christians like him. He began pursuing a career in building and managing websites for single Christians. In 2006, he launched cMatch, a Christians-only dating network intended to encourage intercultural relationships, friendships, and fellowship.

Today, a diverse team of Christians run a safe, free, and vibrant site for singles with a thorough screening to foster a high-quality and authentic user base. cMatch members hail from countries and regions around the world, including the U.S., Canada, East Africa, Southeast Asia, and Australia, and come from all denominations of Christianity.

“Since our launch, we’ve served over 130,000 singles from all over the world,”Chris said. “We have students and retired seniors joining us alike.”

To ensure money isn’t an obstacle to love, cMatch offers a freemium site where free members can receive an unlimited number of messages and can send up to five messages every 24 hours. For added value, the premium membership offers ad-free browsing as well as unlimited messaging — and it will not auto-renew. cMatch is a dating site that puts users ahead of profit, and Chris is proud to maintain high standards of integrity in everything he does.

All profiles are vetted by the cMatch team to assess if the applicant is upstanding, genuine, and Christian. When you browse these profiles, you’ll see only verified members active on the site. Unlike other dating websites, cMatch doesn’t pad their numbers with fake profiles.

“We remove inactive profiles, and we vet every single profile before activating it,” Chris told us. “Our company is 100% bootstrapped because we want to remain in full control of our concept and mission.”

“Once new members start to interact on the site, they get excited,” Chris said, “as they discover our singles are real. They enjoy the positive vibe at cMatch — they feel at home.”

The staff members dedicate themselves to Christian principles and values as they help singles find a pathway to faith-based friendships and relationships. Quality is prioritized above quantity here.

On the site, lighthearted and thought-provoking match questions cut to the heart of who a person is so their match algorithm can recommend the most compatible singles active on the site.

“As Christians, we believe everyone is worthwhile,” Chris stated. “We focus on the person behind the photo, and we encourage our singles to do the same with our unique features.”

The global cMatch team is on a mission to keep the site safe for all users, and the measures they take are top-notch. “We’re seeing much less scammers slipping through cMatch’s nets, and we’re darn proud of it,” Chris said.

The site’s team understands their audience and can cater to their needs. On cMatch, church denomination plays a role in suggested matches because Chris knows how important of a factor it can be to many Christians. “We not only check how well you match with someone, but also how well you meet the requirements of your match,” he said. “So our match percentages are much more accurate.”

“I love the fact that you can really get to know someone by reading his essays and by checking out his answers to your match questions.” — Testimonial from a cMatch user

Among cMatch’s unique features is the ability to give praise to other members. You can compliment someone with a badge of honor — an icon that promotes the recipient’s attractive qualities such as “You are very huggable” or “You are a prayer warrior.” These badges add a bit of flirtatious fun and give members a boost as they search the site for worthy individuals. Plus, advanced search functionality lets you find your perfect match that much faster.

“At cMatch, dating has become a positive experience again,” Chris said. “We see singles get encouraged by these badges, but also by other singles who offer to lend an ear or pray with someone.”

After more than a decade in the dating industry, Chris staunchly refuses to waver or sell out. “Our passion is to serve fellow Christians,” he maintained, “and we don’t want to get pulled into unethical business practices, like adding fake profiles or bots, or selling out the privacy of our users to advertisers.”

Since 2006, cMatch Has Introduced Many Loving Couples

Over the past 10+ years, cMatch has proven their ability to build lasting connections between Christians all over the world. Location no longer stands in the way of love on this site.

In 2010, Raluca sent a wink to Scott on cMatch. Less than two years later, they were married.

Scott and Raluca met on cMatch despite living halfway around the world from one another. Scott was in the U.S. and Raluca was in Romania, but that didn’t stop them from forming a connection based on their shared faith. They met online in November 2010, and two years later they were married. The couple now live in Germany with their two kids and have nothing but good things to say about cMatch: “It’s awesome to have you shine a light in the darkness. Good job, guys!”

The site’s success stories bring hope and inspiration to singles everywhere with many couples writing in to heap praise on the cMatch team. “Every time we get an email thanking us for introducing them to their soulmate, we’re excited,” Chris said, “because this is why we do it.”

“I feel what you guys have put together in helping brothers and sisters in Christ Jesus coming together is incredible,” wrote yet another satisfied user. “I feel so safe here at cMatch, with the way things are. Most singles seem full of the Holy Spirit. I’m feeling so blessed.”

Since he joined the online Christian community more than two decades ago, Chris has dedicated himself to serving singles in search of a faith-based dating experience. Their values guide every feature and policy — from in-depth match questions to free messaging. Over the years, cMatch has built a reputation as a moral leader by running a safe dating site catering to single Christians the world over.

The team continually improves and expands to best serve their faithful following of Christian daters. In the near future, they intend to launch a singles blog designed to offer encouragement and advice for anyone navigating the dating world. “We realized we need to become more than a dating site,” said Chris, “to share our vision on positive, dignified dating.”

From all corners of the world, Chris has pulled together a talented staff of Christians to make the site a helpful and secure place for wholesome singles in search of deep connections.

“I wanted to create a site for people like me,” he explained. “People interested in meeting other single Christians beyond borders. I’m thinking travelers, expats, international students, former missionaries, and anyone else who wants to broaden their horizons. That’s what cMatch is for.”