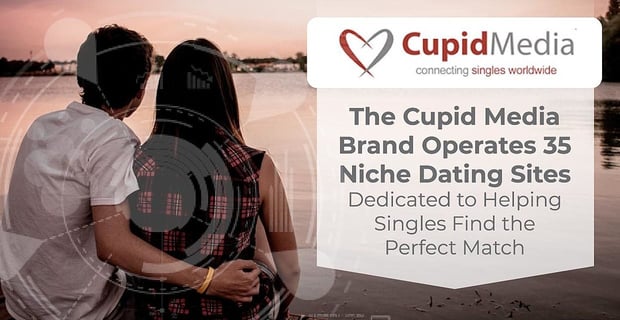 The Short Version: Cupid Media runs a leading online dating network with over 30 million users in 200 countries and territories around the world. Its 35 major brands range from dating sites for lesbian singles (PinkCupid.com) to dating sites for Asian singles (AsianDating.com). Since 2000, Cupid Media has set the standard for how to fill a niche in the dating scene and satisfied millions of singles seeking a perfect match.

Cupid Media represents a vast multi-cultural dating network that’s active in 200 countries around the world. Its dating sites have facilitated countless relationships and marriages, setting the standard for modern dating services. The company has had a massive impact on the dating world, and it all started with two people in a long-distance romance.

Nearly 20 years ago, Andrew and Emily met and fell in love despite being from different countries — Andrew is from Australia and Emily is from Korea — and their international relationship inspired them to start a dating company.

The married couple decided to create a website where singles could find romance across borders. In 2000, they launched AsianEuro.com (now AsianDating.com) to bridge the gap between online daters in Europe and Asia. It was wildly popular, and success stories started rolling in from all corners.

Once they saw love blossom on AsianDating, Andrew and Emily realized they could help people of all ages, orientations, and backgrounds by applying their dating site’s tools to other niches.

Andrew and Emily’s passion project became the foundation for Cupid Media’s global effort to create a platform for just about every ethnicity, religion, and lifestyle under the sun. Cupid Media now has 35 dating sites that cater to a variety of niche audiences, and AsianDating remains one of its most popular and effective products.

“We have always had a strong focus on niche dating and international markets,” said Jason Johnson, the Marketing Manager at Cupid Media. “We want to make it easy for singles to find other like-minded singles, no matter where they are in the world.”

From offices in Australia, Cupid Media has built a phenomenal enterprise on behalf of singles around the world. The diverse team includes people from different cultures, nationalities, and religions, and they work together in offices in New Zealand, Thailand, and Kenya.

The Cupid Media team is collaborative, fun-loving, and passionate about what they do. Some employees have been with the company for over a decade, which tells you a lot about the company culture. It’s the kind of work environment where individuals can take on big responsibilities and learn about the company by working across departments. Plus, the team frequently lets off steam together during happy hours on Fridays or cricket matches during lunch.

The Cupid Media dating network includes over 30 million singles around the world.

Many Cupid Media team members feel motivated by the success stories they hear from customers, and they stand behind the importance of the work they do. One IT member actually met a lovely woman on BrazilCupid.com and ended up marrying her shortly afterward.

“After 18 years in the business, we have learned that we can teach skills and knowledge, but it’s harder to change personal traits,” Jason said. “That’s why we have a strong focus on finding people with the right attitude, work ethic, and personalities to join our team.”

Making Inroads in Challenging Dating Markets Around the World

Cupid Media has been around for nearly two decades, yet it continues to grow by leaps and bounds each day. The dating network currently gains over 40,000 new users per day on average, and Jason said that number has increased year over year.

Singles from over 200 countries, territories, and regions use Cupid Media’s online dating network, and the sites are available in more than 25 languages. The Cupid Media team has a knack for identifying desirable dating populations and creating dating sites around those traits. In the last few years, FilipinoCupid.com, LatinAmericanCupid.com, AsianDating.com, and AfroIntroductions.com have attracted attention and gained millions of followers.

Cupid Media’s largest dating site is Muslima.com, which has over 4.5 million members worldwide. This site launched in 2006 to facilitate traditional Islamic marriages and empower singles to focus on date prospects who share a specific cultural understanding. You can read its success stories here.

“The reason it’s so successful is because it can be difficult enough to find someone who’s single and shares your same religious beliefs,” said Jason. “Muslima allows people with the same beliefs to connect in a way that shows they are ready for something serious.”

Muslima is a helpful resource for Muslim singles who want to marry someone of the same faith.

Cupid Media offers dating sites geared toward many major ethnicities and religions, but it also supports niche networks for people across the sexuality spectrum. The company’s LGBT+ brands, including PinkCupid and GayCupid, make online dating accessible to everyone.

By uniting daters who share similar viewpoints and lifestyles, Cupid Media has created a safe space where singles reach their dating potential and find a partner who understands where they’re coming from.

“It’s our mission to show the world that you can find the love of your life, no matter what preferences you might have,” Jason said.

Translation & Matching Features Ease the Way to a First Date

The Cupid Media team has thrived because of its willingness to adapt, grow, and change with the times. The team constantly adds new features and functionality to make its sites easier to navigate, and they study what has been successful in the past to create a more effective matchmaking system.

“Our matching process is becoming more and more advanced all the time,” Jason told us. “We are always working on something new.”

Thanks to Cupid Media’s translation tools, online daters can overcome a language barrier and broaden their horizons.

Unlike many of its competitors, Cupid Media has decades of experience to back its dating brands, and the team has learned from its users what works and what could be improved.

Cupid Media’s innovative translation feature has been a game changer for international daters. The tool translates chat messages in real time and allows singles of different nationalities to engage in a seamless conversation. This has opened Cupid Media’s members up to a world of dating opportunities.

Over the years, Cupid Media has established dozens of well-known brands that give a personal touch to international dating. The global team endeavors to localize its products (even sites like InternationalCupid.com with a multi-national audience) to help singles feel part of a close-knit community.

“Our team is so passionate about improving the overall dating experience for our customers,” Jason said. “We are always trying to make it easier for them to find their perfect match in the safest and most fun way possible.”

Since its founding, Cupid Media has gone from strength to strength and now reaches singles in over 200 countries. Its influence in the dating industry is undeniable, and the company continues to grow. Jason said the team is always looking for ways to improve its dating services and help people find that ideal match. The future looks bright for this massive online dating engine.

“2018 was our biggest and best year yet,” Jason said. “We continue to trend upward, and we are getting ready for an even bigger 2019.”

In the next year, Cupid Media will be expanding its Australian office to better suit its fast-growing team. The dating company also plans on unveiling several new sites for emerging markets. By bringing time-tested matching features to targeted audiences, Cupid Media has been able to grow in popularity and bring like-minded people together. Its international dating sites have effectively filled a niche in the dating scene and ensured that singles will never run out of options as they search for love.