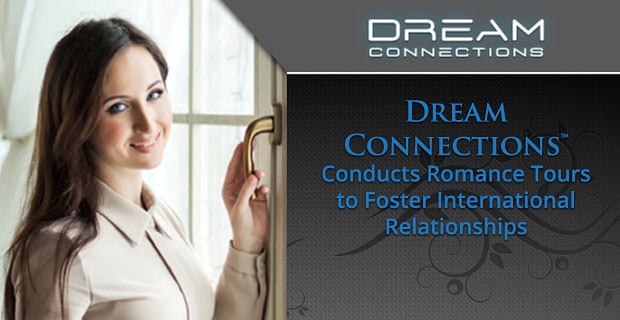 The Short Version: Once singles have exhausted their local dating options, they have to decide how far they’re willing to take the search for love. Dream Connections encourages singles to cross oceans and borders to find a lasting soul mate. This international dating service arranges tours in Ukraine, Thailand, and Colombia with the goal of fostering long-term relationships and marriages. A tight-knit team of matchmakers, translators, designers, and romance coaches work together to make international dating not only doable but enjoyable.

In 2004, Mark Edward Davis went on a fishing trip to the Amazon with 15 coworkers. He caught more than fish on this trip, however — at the end of the trip, he spent a few days in the Brazilian city of Manaus where he caught the love bug.

Mark experienced the excitement and promise of an international romance, and, just like that, he was hooked. His Brazilian connection wasn’t meant to last, so he continued traveling in hopes of meeting a special woman.

Lightning struck on this fifth trip overseas. He met his future wife Anna Astafieva in Ukraine one wintry day in December 2006. He said they had an instant emotional connection. “She is a brilliant and caring woman,” he said, recalling how gracious she was when he took his 8-year-old son Chris to visit her a few months later. “It was an instant family. We felt like we’d always been together.”

Mark proposed to Anna while on a dinner cruise in San Francisco, and they were married on October 13, 2007 in California and are still happily married today. In addition to merging two cultures, the couple had to deal with criticism from people who felt their marriage was somehow illegitimate or insincere.

In 2009, Mark wrote “International Dating: A Man’s Guide to Romance Overseas” to dispel stereotypes and misconceptions about international marriages. Thanks to his advocacy, he and his wife garnered national media attention from the Today Show, Dr. Phil, and cable news networks.

Mark and Anna knew they could do more, so they founded DreamConnections.com in 2011. This international dating service has facilitated introductions between Western men and Eastern European, Colombian, or Thai women. These men and women may come from vastly different backgrounds, but they come together because they’re looking for a marriage that crosses borders and defies expectations.

“Everything had to be done from scratch. There were no good models for international matchmaking,” Mark said. “We invented the Quest Romance Tour to help men from around the world be able to have a wonderful and sincere experience meeting new people.”

Because Dream Connections was founded by an international couple, the team has a deep understanding of how impactful their work can be. “No one punches a clock,” Mark said. “I’m very proud of the fact that the most wonderful people in the world are drawn to want to work here. They work to support our mission and to see men and women succeed.”

The first principle says that the path to marriage is a journey — it may not happen right away, and it may not be easy to find. The love of your life isn’t always living around the corner or sitting one cubicle over. Sometimes you have to go out and seek her.

The second principle is that more education leads to more success. Dream Connections coaches its clients to the best of its ability to get them up to snuff for the dating scene. The team even hosts a weekly webinar on Tuesdays to educate men about different cultures and self-improvement.

Their YouTube channel offers more than 600 videos on culture, dating, relationships, as well as interviews with men, women, and translators.

Next, the Dream Connections team maintains that the old systems are ineffective, and modern matchmaking services can more quickly match singles on dates.

The team’s fourth principle that women deserve respect is pretty self-explanatory. So is the fifth principle, which states that romance is best when it’s a face-to-face experience.

Dream Connections also maintains that community is essential to success, and the team treats every client like family and creates a way for them to get to know one another. Last of all, the team encourages clients to pay it forward and refer other men to the service. After all, that’s how they grow.

“We believe that our cause is more than men taking a vacation trip. This journey and our individual quests are noble and liberating and make dreams come true.” — Mark Edward Davis, Co-Founder of Dream Connections

A tight-knit team working in Ukraine, Thailand, and Colombia pool their expertise in matchmaking, linguistics, marketing, attraction, graphic design, and psychology to help clients meet someone special and fall in love. They are currently gearing up to launch a podcast called the Man Card Academy to help men take control of their lives and live up to their potential.

“Our coaching style is practical and inspirational,” Mark said. “We offer hope and practical tips for people to find lasting love.”

The typical Dream Connections client is around 45 years old — though the team has seen clients as young as 24 and as old as 72 — and makes an average of $65,000 a year. These men are often intelligent and could get a date on their own, but they’re frustrated by the flakiness and superficiality of online dating. Nearly half of Dream Connections clients have been married before and want a second shot at love.

Around 65% of male clients come from the US, and the rest are from 20 Western countries, including Canada, Australia, the UK, and New Zealand.

Dream Connections takes these marriage-minded men on tours to Nikolaev and Kherson in Ukraine. They also have a tour to Thailand and Colombia. The journey starts with a Skype interview with the team member so they can get a handle on what you’re looking for and how they can help you.

Clients then go through a series of six pre-tour training videos where they learn how to make a good first impression, how to navigate cultural differences, and how the dating process differs when you’re seeing someone overseas. Each client has a dedicated romance coach who conducts these sessions and answers questions along the way.

The Romance Coach is on-hand during the tour to make sure everything goes smoothly from the meet-and-greet events to the farewell dinner.

The Meet and Greet events introduce clients to 100+ marriage-minded ladies for 15 minutes at a time. It’s kind of like speed dating. After the event, participants will tell the Romance Coach if they were interested in pursuing a real relationship with anybody. If there’s a mutual match, the coach exchanges phone numbers and arranges an in-person date in the next few days.

Some men focus right away on a particular woman and go on three or four dates with her to solidify the connection. It’s a slow-building process that ends on a high note.

“On the last day of the tour, we’ll host a dinner event that is like our prom night,” Mark said. “You’ll invite the lady you’ve had most connection with to this elegant dinner — it will be a night to remember.”

Many couples have found love thanks to Dream Connections and posted their success stories on the site. The team is always overjoyed to hear these stories and receive wedding announcements or invitations. Sometimes they even have the honor of facilitating a marriage proposal.

Jimmie reached out to the Dream Connections team because he wanted to plan a special proposal. He and the team brainstormed things his partner Svetlana would like, and they eventually decided to put together a grand movie trailer proposal. Dream Connections contacted a local movie theater to run the trailer, surprising Svetlana, and it was a smash hit. She said yes!

Mark told us that 80% of Dream Connections clients who went on the Quest Tour said they met someone special during the trip and felt the potential for a lasting relationship. But their successes don’t just include clients — members of the team have also made deep connections through their work.

Julia Rodriguez started working as a translator for Dream Connections in 2012. She never expected when she took the job that she’d fall in love, yet that’s exactly what happened. She grew fond of a client named Nick and asked the matchmakers to see if he felt the same way. And he did! They’re now happily married and living in Florida with their baby girl.

George Baptista attended a Dream Connections tour in March and met many lovely people, but one woman stood out to him. When he went on his first date with Yana, he knew she was the one for him. Three months and two days later, they got married.

“I love and appreciate everything about this man,” Yana said. “He is everything I dreamed about. He is my love.”

Taking Men on a Journey to Find Lasting Love

The beauty of Brazil took Mark’s breath away, but he was equally captivated by the beauty and kindness of its people. He realized he could expand his horizons by searching for a life partner abroad, and it worked. He is now happily married to a Ukrainian woman.

Dream Connections introduces single men and women to a world of dating possibilities.

Mark founded Dream Connections to give other single men the opportunity to cultivate international romances and marriages. The small company conducts eight international tours a year and has sparked connections between hundreds of commitment-oriented men and women.

In the coming year, the Dream Connections team intends to expand its services to include Russian language classes, English language classes, and gift delivery services. The site will also support single men by offering real-time advice via an online chat with a professional Romance Coach. Whether the team is giving advice or making introductions, the goal is to bring more love and understanding to the international dating scene.

“As you can see already, we’re very proud of what we do and passionate about this work,” Mark said. “We designed our system to work with anyone — any personality style, level of dating experience, or level of travel experience.”